END_OF_DOCUMENT_TOKEN_TO_BE_REPLACED

New forecast sees return to deficit after 2017 balance...
DEMAND to buy platinum will rise in 2018 according to a new forecast, while mining supply of this rare precious metal will continue to fall.
That means the global platinum market – having come into balance in 2017 after 5 years of demand to buy outstripping mine output plus scrap recycling – will return to deficit in 2018 according to the new forecasts from independent analysts SFA (Oxford).
"The global platinum jewelry market is predicted to recover in 2018," says the mining-backed World Platinum Investment Council, reporting SFA's forecast of 2.5% growth in its Platinum Quarterly.
Industrial demand is expected to recover this year's drop, rebounding by 9.1% "after a tough 2017," WPIC says, "largely driven by increasing demand from the petroleum [refining] and glass [making] sectors."
Mining output in contrast will fall 1.4%, marking the third consecutive drop and shrinking to the lowest level since the crisis of 2014, when a 5-month strike hit major sites in No.1 producer South Africa.
2018's resulting deficit will "further reduce the availability of Above Ground Stocks of the metal," WPIC concludes. 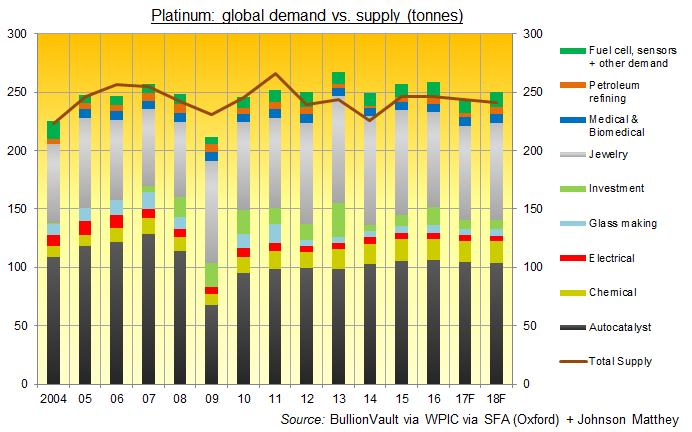 Crucially, SFA's 2018 forecast sees global automotive demand to buy platinum – the single largest use, where platinum catalysts reduce harmful emissions from diesel engines – slipping only 0.9% from 2017.
This year's autocat demand fell only 1.5% from 2016 according to SFA's data, despite the flood of anti-diesel headlines and now government action.
"Those who have written off the role of platinum in controlling emissions are clearly too hasty," says Paul Wilson, CEO of WPIC.
Marking the next largest source of demand to buy platinum, jewelry consumption has begun to stabilize in No.1 buyer China and grown "rapidly" in India, the new report says.
"Though Q3 growth was dampened by new legislation," says jewelry promotion body the Platinum Guild International in its separate quarterly update, "platinum jewellery continues to outperform the category."
PGI puts India's platinum jewelry sales 24% higher in the third quarter from a year before, with full-year 2017 demand on track for a 30% rise.
Turning to China, where annual demand has retreated 30% from the price-driven peaks of 2009 and 2013, "The scope for further decline is now limited," predicted specialist consultancy Metals Focus at the turn of this year.
That view was repeated by French investment and bullion bank Natixis, with "most of the drop in demand for platinum from [China's] jewelry sector [now having] already taken place."
Amongst South African miners meantime, "Supply continues to tighten with the long-term effects of falling capital expenditure and recent closures becoming evident," says Wilson at WPIC.
No.3 producer Lonmin (LON:LMI) said in March it had " done all the low-hanging fruits" to cut costs, pointing to capital expenditure and restructuring. In May its auditors said there was " material uncertainty" over the company's ability to stay in business. In October it delayed publication of its quarterly report and production numbers.
"Current market conditions will persist for a little bit longer," reckons Paul Dunne, CEO of No.X producer Northam Platinum (JSE:NHM), estimating to MiningMX in November that South Africa's annual output will total fewer than 4 million ounces in 2017 – some 125 metric tonnes – down 25% from a decade before.
SFA's latest 2017 estimates put South Africa's mine output at 132 tonnes, declining to 129 next year.
"The country's production is still shrinking," agrees Dunne. "You will see further production surprises" in 2018.
Reviewing the latest WPIC report, the SFA data "forecast a healthy amount of investment demand" to buy platinum, says analyst Jonathan Butler at Japanese conglomerate Mitsubishi, "which is largely responsible for the projected deficit next year."