END_OF_DOCUMENT_TOKEN_TO_BE_REPLACED

Bitcoin eats gold investment, says everyone...
BITCOIN is many things to many people, says Adrian Ash at BullionVault, introducing investment analysis presented last week to the Asia Pacific Precious Metals Conference.
Some keep saying it's the new gold, threatening to eat demand to invest in the yellow metal.
Others call it the future of money.
Indeed, it's the "next best thing" to the kind of money God would create, apparently...
...if not "the most disruptive force of this century" (©  Michael Saylor)...
...or simply a "good thing" if not "a helluva drug" (© Elon Musk)...
...whilst also "impossible to shut down" (©  Cathy Wood)...
...even though its providers and platforms are now "essentially out of business" in China, the world's No.2 economy and crypto's (former) No.1 mining nation, thanks to Beijing's latest crackdown.
But what about that gold analogy? Is Bitcoin really "Gold 2.0" or "digital gold" or – in fact – "better than gold" as some promoters claim?
And is it coming to eat gold investment demand?
You might think so if you squint at the last 9 months' action. 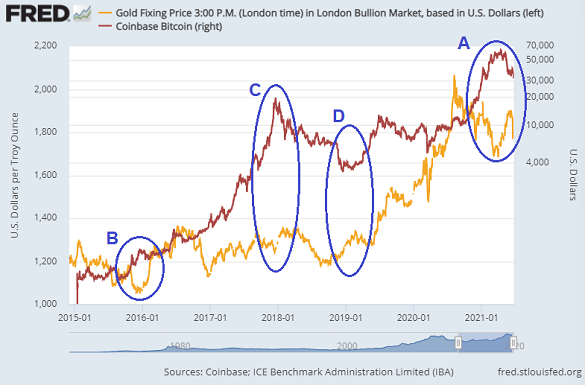 Exhibit A shows gold and Bitcoin prices going in opposite directions since last summer's $2000 peak in the metal.
You can find similar patterns across the prior half-decade, too.
Bitcoin's late-2015 rise, for instance, coincided with gold hitting its post-financial crisis lows at $1045 per ounce (B).
The late-2017 peak in Bitcoin (C) then coincided with another retreat in gold, while its late-2018 plunge then saw gold prices turn markedly higher (D).
Thing is, there are lots of other points on this chart you could highlight to show how gold and Bitcoin have also sometimes moved together. And claiming that one asset must be losing investors to another simply because their price have diverged would far from prove the case anyway. Not that it's stopped anyone writing clickbait 'analysis' or headlines, of course.
But has gold investing declined thanks to Bitcoin's rise? 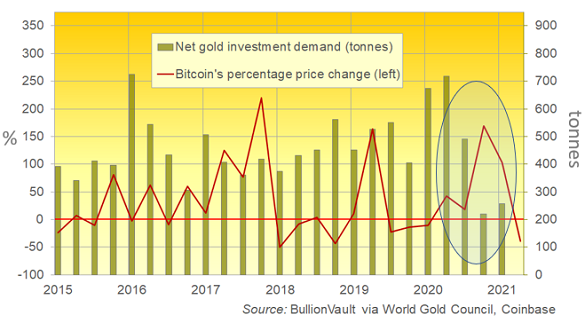 This chart uses Coinbase data for Bitcoin's price change (red, per cent, left) versus gold demand figures from specialist consultancy Metals Focus, published by the World Gold Council.
We add together gold coin and small-bar purchases, plus gold-backed ETF flows, plus central-bank buying to get total net gold investing demand.
And as you can see, the last 3 months of 2020 saw the weakest quarterly gold investing demand, net of investor selling, in over 10 years.
Bitcoin prices were meantime surging – a pattern repeated in the first quarter of 2021.
So there might be a link, right?
That plunge in net gold investment demand was led by heavy selling from the ETFs. But their 130-tonne liquidation came after a record 1,300t build over the prior 18 months. And again, there's no evidence here that gold ETF outflows went into crypto rather than anywhere else.
Central-bank gold demand meanwhile held above its 5-year average, while household demand worldwide for coins and small bars was in line with its typical level – a pattern repeated in Q1 2021 and now improved overall by a stronger Q2 for ETF flows, now turning positive again.
Bitcoin, in contrast, sank by more than 40% in price in April-June 2021. So might this see-saw of gold ETF demand and Bitcoin's price signal a revolving door for fund managers and other professional investors? 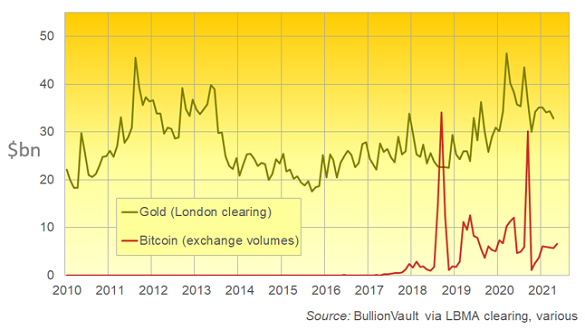 Gold-investment analysts often see ETF flows as a guide to wider activity among professional investors, especially wealth managers.
That wider activity essentially means buying or selling physical metal in large bars or as a credit position (aka unallocated gold), most often through the London bullion market, the world's central gold trading and storage hub.
While London's daily trading volumes are now very transparent thanks to the LBMA's Trade Data, it launched only in 2018. So our chart above uses the longer-running clearing data, which gives smaller totals for the daily average by value, because it captures only those trades settled through the 4 big clearing banks.
Against that, it's hard to find any reliable and global data for Bitcoin trading volumes. But our chart above uses commonly-quoted figures, and we'll go with these numbers because – as you can see – they don't have anything to do with the London gold volumes either way.
Yes, Bitcoin shows two massive spikes in average daily volume, almost touching the same levels as London gold sees every day. But whatever is happening in crypto, gold has not lost depth or volume over the last 1, 5 or 10 years of Bitcoin's existence. On the contrary, both lines show an underlying rise.
No one eating anyone's lunch here then. Not on the evidence so far.
But what about the future? Won't crypto steal gold-investment dollars from tomorrow's savers and pension-pot builders?
Maybe it's already happening?
Answer to come in Part 2...