END_OF_DOCUMENT_TOKEN_TO_BE_REPLACED

If Bitcoin really is like gold, watch out...!
NEW YEAR's DAY 1975 marked a huge turn in the gold market, writes Adrian Ash at BullionVault.
Forty years after banning it, the US government at last let private citizens own bullion.
Coin shops and banks knew how big this was. So they raced to stock up as 1974 ended.
What's more, this new freedom also meant Wall Street could launch trading contracts on the metal.
Five exchanges rushed to cash in, each listing a gold futures contract on New Year's Eve, ready for the gold rush to start on January 1st.
Newspapers struggled to name a more bullish event. TV pundits said gold prices would double or more in the following 12-24 months.
That seemed a fair guess.
Gold had nearly doubled in 1974.
If anticipation could do that, what might the return of US gold investing demand mean for the price?
But you know the old Wall Street saying...

"Buy the rumour, sell the news."

...and 1975 proved a dud for US gold dealers.
"Hess's department store chain in Pennsylvania sold 200 ounces the first day...and then got out of the business," reported the New York Times 12 months later.
"The Republic National Bank actually sold less gold in 1975 than it did in 1974.
"Merrill Lynch...said it sold only 25-30% of the gold bullion it had expected to sell during 1975."
1975 also proved cruel to those few US investors who did buy gold, too.
Instead of doubling again, the gold price sank against the Dollar...halving by late-summer 1976.
It wouldn't get back near $200 per ounce...its record high of Christmas 1974...until the middle of 1978.
All that hype failed to pay as expected. 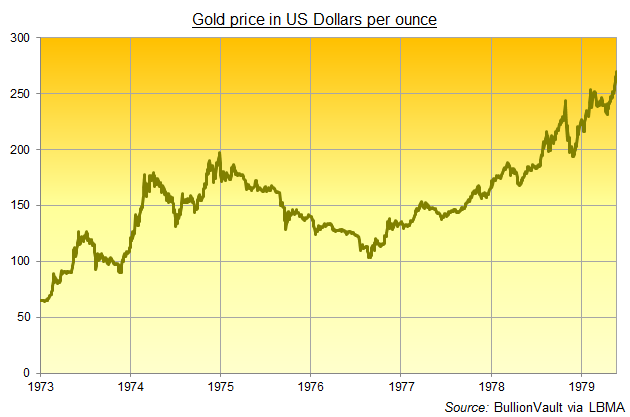 Why revisit all this ancient history today?
Well, it's because here in late 2017, gold prices are dropping hard...as are silver and platinum...as bitcoin! Bitcoin! BITCOIN! swallows the financial news in one gulp.
And this weekend, starting on Sunday, the CBOE futures exchange will launch trading in Bitcoin derivatives.
Competitor exchange the CME will then launch its own Bitcoin futures a week on Monday.
Hence the price surge this week. Or so says the crowd.
"Institutional corporate money is now about to enter the land of Bitcoin!" gushes one 'expert' with a Twitter account.
For all we know, that could prove true.
But rising 56% inside 7 days, Bitcoin has gone vertical. It broke a new record near $12,000 last Sunday. This morning it touched a new record above $17,000.
What to think, let alone do about it?
"I'm sorry," a BullionVault user complains via Facebook, "but your countless messages about Bitcoin are becoming a nuisance.
"Your customers are gold holders, not Bitcoin holders. Please stay on topic."
Thing is, some BullionVault users do own Bitcoin – or at least, they have done according to what they've told us over the years. Because whatever you make of the crypto-currency idea, both gold and Bitcoin offer to hold value outside the formal financial system.
Early adopters of BullionVault's game-changing fintech for gold also tended to work in I.T. or finance themselves. Many of them came across Bitcoin way ahead of the crowd, back before the Silk Road proved its use case for illegal cash payments.
Moreover right now, Bitcoin is very much on topic for any analysis of gold. The crypto-currency dominates the financial headlines. Its perfect bubble crystalizes all that is bubblicious in our QE-stuffed ultra-low-rate world. And as always, gold investing is all about context, not the metal itself.
Inflation, interest rates, stock markets, geopolitics, government debt...all this and more can drive investors to buy or sell the yellow metal. That's what drives prices higher or lower.
Gold in contrast doesn't do anything. It doesn't even rust.
Whether that makes it more or less useful than a chunk of computer code, time will tell.
It will also no doubt reveal whether Bitcoin can shrug off sinking like gold did in 1975...or like Bitcoin itself did in 2014...and go on to rise 8-fold as gold did at the peak of its 1970s' bull run.
Just beware the big anticipation meanwhile over this weekend's launch of Bitcoin futures.
Because everyone agrees it can only be bullish.