END_OF_DOCUMENT_TOKEN_TO_BE_REPLACED

New Year jump rips up 2023 forecasts already...
PRECIOUS METAL PRICES have a habit of rising in January, writes Adrian Ash at BullionVault.
Fourteen times in the last 2 decades to 2023 in fact, gold and silver prices have risen at New Year in Dollar terms. For platinum, investors saw Dollar-price gains 18 times in January.
New Year 2023 is acting to type, and dramatically so. Following December's steep price gains, the first week's action has been so strong that gold has already done half of the full-year gain projected by BullionVault users in response to our 2023 forecast survey last month.
Silver has jumped faster still, also defying strong US jobs data that backs the Federal Reserve's vow to keep raising rates in 2023 and already achieving two-thirds of private investors' average price forecasts for next New Year's Eve.
Platinum has meantime topped the BullionVault survey's average price prediction for 2023 as a whole, while palladium in contrast has given itself more work to do.

The move already made by gold, silver and platinum so far in 2023 will have professional analysts ripping up their forecasts as well.
But while silver prices slipped a little across last year as a whole, the gold price came into 2023 with another remarkable 12 months behind it.
Last year's annual average price in US Dollars set gold's 3rd new record high in a row. Silver prices in contrast slipped 3.4% after rising 3 years running.
The Euro gold price meantime set its 4th end-year record in a row in 2022, having hit new all-time highs in March above €1900 per ounce on Russia's latest invasion of Ukraine.
Gold priced in Yen also blew past its previous all-time highs as the Japanese currency sank on the FX market. And currency weakness also saw the UK gold price in Pounds per ounce re-touch August 2020's first-wave Covid peak of £1580 twice more...
...setting a new annual average record 11.5% above 2021 at £1458. 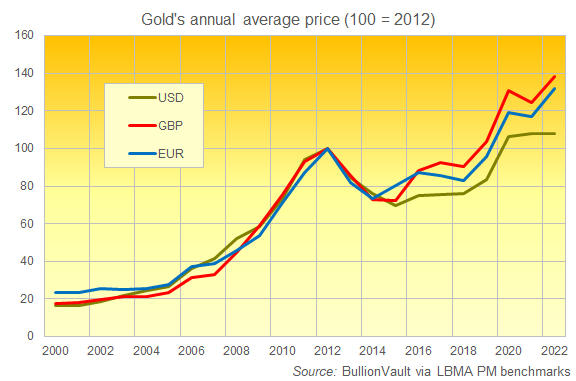 Okay, so gold's annual average Dollar price came into 2023 after rising just $1.60 from the prior 12 months' new high.
But averaging more than $1800 per ounce for the first time ever, no-income gold showed remarkable strength against both the steepest rise in US interest rates since 1980 (when the Fed under Paul Volcker "wrung inflation out of the system" and gold prices sank from what were then all-time highs) and also the steepest rise in longer-term bond yields since forever.
That resilience surely offers "the most bullish signal" for 2023 according to one professional bullion trader.
So what comes next?
According to last month's forecasts from BullionVault users – more than 1,800 of whom answered our poll in full – monetary policy will stand out among the key price drivers for gold and the other precious metals in 2023 (27.7%) followed by inflation (17.8%), the size of government budget deficits (16.8%), and then geopolitics.
Coming in at 14.4% in fact, the number of respondents naming geopolitics as the No.1 price driver was down from our July survey's 3-year high of 18.1% and markedly below the survey's long-run average over the last 8 years of 21.2%.
This understanding of 2023's likely dynamics in the bullion market reflects the reality of 2022.
War, inflation, and a plunging stock market may sound like the perfect storm for precious metals.
But because physical bullion pays no income, those rising interest rates we mentioned above worked to offset those factors...
...capping the gains in gold and silver while leaving them as the only tradable assets outside the energy sector to match or beat the cost of living and hold their value in real terms.
Inflation has now edged lower on the official data, but has yet to back off from multi-decade highs. So interest rates from central banks if not bond-market prices are likely to continue rising a little further as well, led of course by the US Fed, despite the clear and present threat of a deep global recession.
Given this stagflation consensus for 2023, why use precious metals as part of your savings and investments?
According to BullionVault's client survey, precious-metal investors on average hold almost four-fifths of their self-invested wealth in other assets. So while the No.1 financial worry of 2023 remains inflation for half of them (48.9%) the No.1 reason they cite for investing in physical bullion is in fact the need to spread risk and diversify their wider portfolio (37.6%), just ahead of aiming to beat the cost of living (34.8%).
Here again, 2022 set a clear model for these aims, because precious metals worked to help investors spread risk and reduce the hit from inflation.
Indeed, a 'standard' UK investment portfolio split 60% in shares and 40% in bonds would have returned just 0.6% per year over the last half-decade...
...the very worst 5-year performance since at least 1970 on our calculations.
But switching just 5% of that portfolio into gold would have boosted the average annual return to 1.1%...
...and 2022's miserable 1-year loss of 8.3% even before inflation for a standard 60:40 portfolio of shares and bonds would have been halved to 3.9% if it had held one-tenth in gold and another tenth in silver instead.
In short, "Diversification pays" to quote Jeff Prestridge at the Mail on Sunday in London, who cites BullionVault's analysis of UK portfolios in his latest weekly column.
As things stand today, fear and doubt across wider financial markets mean gold and silver have begun 2023 with a typical New Year surge, attracting speculative inflows as traders see weak growth, strong inflation and a worsening geopolitical outlook ahead.
What this price jump has NOT done so far, however, is attract a flood of new Western investment inflows to physical metal.
Gold-backed ETF trust funds are little changed in size for 2023 to date after shrinking for a 2nd year running. BullionVault users as a group have also flipped into small net sellers of gold and more notably of silver...
...taking profit on these sudden price gains and slightly reducing the stockpile of bullion owned outright by our customers from late-2022's fresh all-time records.
Good luck if that's you. No one ever went broke taking a profit.
But if this price pop doesn't back off soon, driven by hot-money hedge funds in the futures and options market as well as by China's strong import demand ahead of the Lunar New Year on 22nd January, then regaining your diversification will mean having to buy back in at a higher level.
Whatever professional analysts think – all now busy re-writing their New Year outlooks with prices already steeply higher – that's how BullionVault users as a whole forecast things will work for gold, silver and the other precious metals in 2023.