END_OF_DOCUMENT_TOKEN_TO_BE_REPLACED

Trouble is coming, trouble the central banks will flunk. Again...
SHORT TERM the failure of the Swiss gold initiative means nothing for gold prices, writes Adrian Ash at BullionVault.
The market had already discounted any hope of a win, as we'd already noted to Daily Update readers. Monday morning's speculative push lower, knocking first $10 then $20 off the Dollar price, was quickly erased. And how!
What's more, the strength of the 'No' vote...fully 76% of the Swiss electorate...says that public confidence in central bankers is solid. That's a big reversal from the height of the recent bull market in gold peaking in 2011-2012.
But further ahead, last Sunday's result suggests that central bankers face serious trouble. The kind of trouble they're unlikely to beat. By the time the general public rumble they're failure, gold will very likely be making headlines for rising...rather than drawing mockery...once more.
How so? The failed Swiss gold initiative, in demanding 20% of assets be held in gold, would have curbed the SNB's ability to print money to devalue the Franc. So its resounding defeat says people now find QE perfectly acceptable, and that points to a deepening deflationary psychology.
Because with QE winning on Sunday, voters who've bought the line that QE helps defeat deflation and economic depression must think that's what is about to hit them. So as the example of Japan shows, ever-more QE cash is needed to boost asset prices and try to stoke inflation. Yet once that policy finally succeeds, then today's confidence in central-bank policy will look badly misplaced. Because a nice, gentle uptick in inflation is not what will follow.
Central banks failed to predict or control the financial collapse of 2008. They're now failing to get inflation of 2.0% per year, their standard "target" rate. The longer this goes on, the more "unconventional" QE they will apply.
What makes anyone think the central banks understand what they're doing or will get ahead of the outcome?
As it is, the Swiss National Bank still has plenty of gold. Its 1,040 tonnes work out to a huge 129 grams for every man, woman and child in the country. That's a heavier gold-weighting than any other nation on earth according to our maths here at BullionVault today. 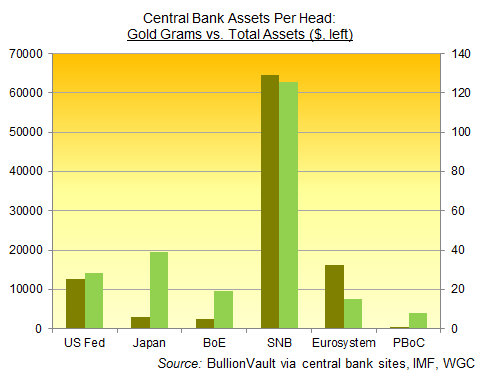 But then, the Swiss population might be grateful for such large per capita gold reserves. Because thanks to Switzerland's QE policy...creating Francs to sell for Euro and Dollar assets, depressing the value of CHF on the currency market to try and boost exports and prices...the central bank's total assets per head are also the largest in the world right now.
Worth fully $62,800 per head of population, the SNB's per capita assets, as our new chart shows, are more than 15 times what China's People Bank holds per head...eight times what the Eurozone central banks hold...and over 3 times more than even the Bank of Japan's QE-crazed balancesheet.
Swiss voters seem perfectly happy with this. Or rather, they're oblivious. Quantitative easing is just fine. Because deflation is starting to set like concrete. Sure, a handful of Swiss citizens did choose to buy gold ahead of the vote, using BullionVault as we noted to CNBC last week.
We think they were right to do so. Of course we do! But not just because it's our business, and certainly not because we expected the price to gap higher at the start of Asian trade Monday following a "Yes" vote.
No, we think they were right to buy gold because the Swiss gold vote was sure to fail.
Look, if your government...running sound, sensible fiscal and monetary policy...adds physical gold to its assets, you would have less need of financial insurance for your own money.
But Swiss policy, like its public opinion, suggests quite the opposite. The gold initiative met a resounding 'no'. That leaves Swiss gold reserves slipping down the world table of national holdings as other countries buy more. It also leaves the Swiss National Bank's money-printing QE scheme to continue unfettered...actively seeking to devalue the Franc as the SNB flirts with the new absurdity of negative interest rates.
If that sounds similar to your own currency's outlook, you might want to buy gold for your own personal reserves too. But of course, sitting here at BullionVault...the largest, lowest-cost provider of physical gold and silver ownership to private investors...we would say that, wouldn't we?