END_OF_DOCUMENT_TOKEN_TO_BE_REPLACED

At face value – "No". The first quarter rise in GDP was just 0.3% – an annual rate of growth of 1.2%. Looking back over the past year, the UK has grown by just 0.6%. These rates of growth are far from satisfactory at first sight – and well short of the 3% or so growth we enjoyed before the financial crisis. 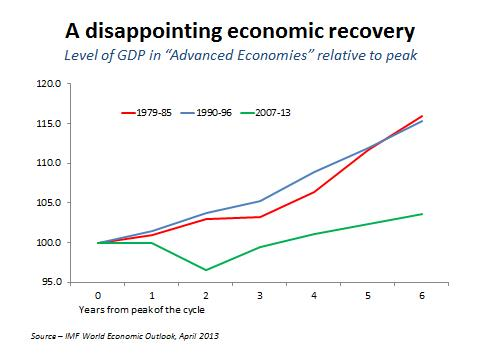 But that is the wrong benchmark against which to assess recent economic performance.  Even though it wasn't clear at the time, we now know our pre-2007 economic growth had insecure foundations. It was sustained by a world of easy money, cheap imports and excessive confidence in economic policymakers. These growth tailwinds have now disappeared. And this has not just affected the UK. Growth across the whole Western world has been sluggish in the aftermath of the financial crisis – reflecting a "New Normal" of disappointing economic performance that is likely to continue through the mid-2010s.

The IMF estimate that this year GDP in the "advanced economies" – which includes the US, Japan and the leading European economies – will be just 3.7% above the peak of the cycle in 2007/8. At the same stage of the early 1980s and early 1990s recoveries, output had recovered to a level 15-16% above the peak (see Chart).

Though UK GDP has yet to recover its early 2008 peak, there has been a very big drag from three sectors of the economy which make up less than 20% of output and about 10% of jobs – financial services, North Sea oil/gas and construction. With the exception of the financial sector, the services activities which make up the bulk of our economy are doing well, which is why employment has increased so strongly. The private sector has created over a million UK jobs in the past two years.

And taking into account growth before the financial crisis as well as the last few years of disappointing economic performance, the UK scores surprisingly well in relation to its peer group of economies. As the chart below shows, the UK comes second behind Germany among the G7 in terms of the rise in living standards (GDP per head of population) achieved in the 21st century.  France and Italy are the real laggards on this measure. In the case of Italy, GDP per head has fallen by over 6% since the start of the new century. 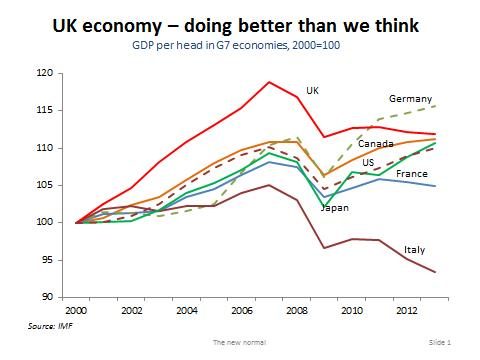 The UK economy has some weaknesses, but it also has hidden strengths. While we no longer have the large manufacturing base which sustained our economy in the 19th and early 20th centuries, we still have some world-leading manufacturers – in sectors like aerospace, high-technology engineering and pharmaceuticals. Our car industry achieved an all-time record level of exports last year.

The common characteristics of the sectors where the UK remains competitive in manufacturing are the deployment of knowledge, technology and skills. There is no future for us trying to compete in low wage, labour-intensive manufacturing industries which have migrated to emerging economies like China, India and Indonesia.

We also have some highly successful and competitive services sector businesses which compete very effectively on world markets.  The output of UK business and professional services has been growing at about 5% a year during this recovery. These are services which we sell to the rest of the world on the basis of our experience, reputation, knowledge and skills.

Education is another successful UK exporter – attracting overseas students who pay fees and spend money in the UK economy. The creative industries – music, fashion, art and design – are another area where the British economy has a strong competitive edge, helped by the global reach of the English language. Tourism, culture and heritage is yet another UK success story – hopefully boost ed by the Olympics last year.

We should recognise these pillars of success for the British economy and build on them. The UK's future is as a high-skill, high-tech economy – selling products and services to the rest of the world which depend on our knowledge, reputation and experience.  We have a flexible labour market and the potential to create many new dynamic and innovative businesses, as long as regulatory burdens and excessive taxation do not get in the way.

In the "New Normal" economy affecting the whole Western world, our GDP figures will continue to look poor by comparison with the 1990s and 2000s. But if we continue to reinforce success in areas where the UK economy has a competitive edge – particularly in the services industries – the UK should still be able to perform well compared to our peer group of economies in northern Europe and North America.

A version of this article was published in City AM on 2nd May 2013.