END_OF_DOCUMENT_TOKEN_TO_BE_REPLACED

WHAT WOULD happen to Silver Prices if the price of gold broke down? wonders Brad Zigler at Hard Assets Investor.

Silver, after all, is gold's fellow traveler, though the two metals don't move in lock step with one another. The two metals' different drumbeats became distinctly audible over the past couple of months as the gold/silver ratio plummeted. Silver gained ground as the Gold Price tumbled from 66-ounces of silver to 50-ounces and – briefly – less.

Silver not only got ahead of gold this fall, it also got ahead of itself. Silver's current price – basis the London fix – is now 36% above its 200-day moving average. Silver, compared to gold, seems much more overextended, as the yellow metal is just 11% above its 10-month average price. 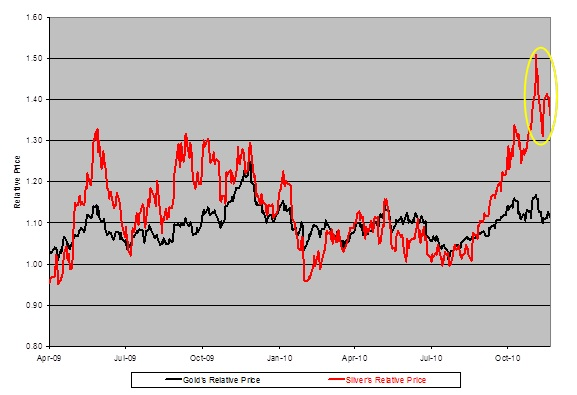 Of course, there's nothing wrong with a commodity's price running ahead of its moving averages. That's something to be desired, in fact, if you're bullish.

What we've seen, however, is significant selling in the wake of peaks in silver's relative price. Since April 2009, Silver Prices have fallen an average of 5.1% within a week of such crests.

Now, there's no head-and-shoulders top (a bearish pattern that some see in the Gold Price) forming in silver's price chart. There is one shaping up, however, in the metal's Relative Strength Index graph. Call that a stealth H&S pattern.

Investors chary of futures ought to look at the closing price chart for the iShares Silver Trust (NYSE Arca: SLV) for guidance. There they'll see the makings of a double top, which, if completed, could set up a sell-off to the ETF's October reaction low near $22.70. 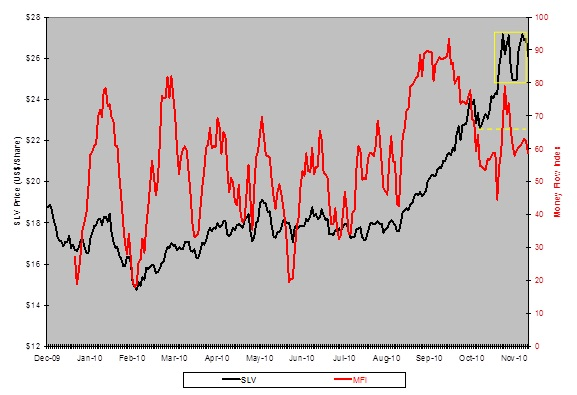 If silver and gold follow the same timeline, we should know if a top is in by the first week in December. That makes the next few trading days critically important for intermediate-term traders and investors.