END_OF_DOCUMENT_TOKEN_TO_BE_REPLACED

Open interest in silver futures hits lowest level since May 2009...

WE HAVE been asked if we knew that "the (Comex) silver open interest is at the lowest it has been in many, many years,"or "has fallen below 100,000 contracts for the first time in many years," says the latest note from Gene Arensberg's GotGoldReport.

For the record, as of Tuesday, November 29, the COMEX silver open interest for the big 5,000 ounce contract was 98,959 contracts open following the roll to March – with a large number of non-commercial spread trades having been taken off (a spread trade is a simultaneous long and short trade of the same commodity meant to capture or arbitrage convergence or divergence of the difference between two different contract time periods – or to capture the contraction or widening of the basis)*. 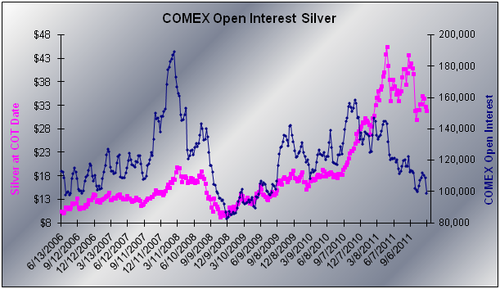 *Spread trades are considered low risk and thus the amount of performance bond (margin) required is miniscule compared to speculative or hedge trades. The reason is that there is very little volatility on spread trades. To explain why someone might want to employ a spread; if, for example, the trader believed that the contango/backwardation was going to widen or disappear between contracts with different delivery dates he/she could buy or sell one near delivery contract and offset that trade with the opposite trade on a contract that matures months or years later. If the contango/backwardation does what the trader expects he/she can earn the amount of the convergence or widening of the spread between them.

Looking to buy and own pure, physical Gold Bullion?...