END_OF_DOCUMENT_TOKEN_TO_BE_REPLACED

The SILVER PRICE has bounced 27% since the end of January, a huge advance over less than four weeks of trading days, writes Jeff Clark, editor of Doug Casey's Big Gold newsletter.

Silver's chart already soared past its 2010 high. It was selling for less than $16 this time last year, making a double for US Dollar and pretty much all other investors in just 12 months.

So is silver pricey at these levels? Or should we ignore the run-up and keep Buying Silver today?

I've read a few articles that say we should expect to see the silver chart drop to the $25 level, and one pinpointed $22 per ounce. Others, of course, see bullish tea leaves for the near term and believe it's headed higher. Of those that assert silver will decline, most believe it will be temporary, though one writer claims the bull market in precious metals is over. (I think he's a holdout from the gold-is-a-bubble camp.)

These authors could be right about a near-term decline, but I'm less concerned with what the price does this month or even over the next few months. Focus more on where silver is likely headed over the next few years.

Caution required: The following silver chart may cause excitement.

While there are lots of reasons to be bullish on the silver charts today, what everyone really wants to know is how high the Silver Price can go. Here's one hint, based strictly on historical price performance. 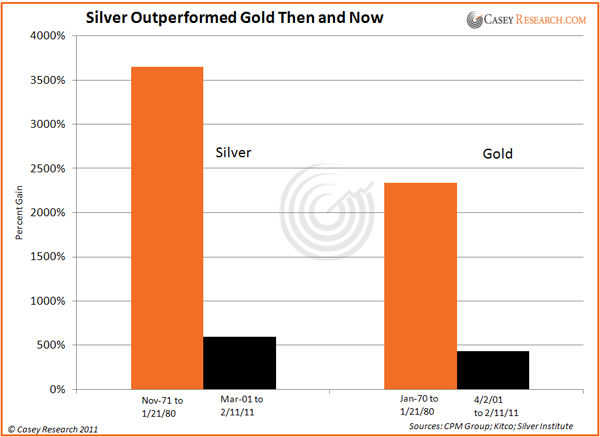 You'll also notice silver has a record of outperforming gold in these two bull markets. In spite of the price dropping 26.9% in 2008 (while gold gained 5%), the metal has outrun its yellow cousin by 38.6% since their respective lows in 2001.

From solely a historical price perspective, the silver chart certainly suggests we've got a long way to go with both metals. The question is if the fundamentals support such Silver Price advances (show me a healthy Dollar and no threat of inflation, and we'll talk), but my point for the moment is that there is an established precedence for the price of these metals to climb much higher. And just as important, to keep one's eye on the big picture.

So, yes, I'm Buying Silver at $30, in part because I think the potential for enormous gains is high. But I'm not draining my cash account to do so. I think it's important for the precious metals investor to always be in the game, but given silver's volatility and the precarious nature of most markets right now, prudence suggests we keep some powder dry as well.

Let's say one of the soothsayers noted above is correct and silver temporarily falls to $25. If you snag it at that level, your endgame return would be 543%, vs. the 436% gain from $30 (excluding premiums and storage costs). That's more than another 100% gain on your original investment.

But how does one buy silver not knowing if the price will plummet or soar? For example, silver could take off from these levels, never to see $30 again, leaving those of you waiting for a sell-off out of the market. Or it could sink to $25, making investors who went all in now regret they didn't wait for a better price. Or it could trade sideways until, say, next fall, leaving both parties uncertain and on the sidelines.

In my opinion, there's a one-word answer to the question. It solves all dilemmas – it keeps you in the market, while simultaneously letting you buy at lower prices if that occurs. It lets you build your position bigger and bigger without the worry of whether you're getting a good price.

That one-word verb is, accumulate. Or in the vernacular made popular in the '80s by the financial planning community, Dollar cost average. In other words, buy a little now, buy a little next month, etc., until you have a position sufficient in size to fight off inflation and any other economic woe we're likely to encounter over the next few years.

So my advice is, buy, hold, repeat. Because if our silver market ends up looking anything like that left bar in the silver chart above, you may regret not having bought at $30 too.

Buy Silver at the lowest costs, store it for as little as 0.04% per month in the safest locations using Bullion Vault...