END_OF_DOCUMENT_TOKEN_TO_BE_REPLACED

First silver supply drop in 15 years won't match fall in demand...
SILVER SUPPLY is expected to fall this year, but it won't fall as hard as demand, according to a new report by a leading precious metals consultancy, writes Steffen Grosshauser at BullionVault.
This will widen the metal's "major surplus" say London-based analysts Metals Focus. Yet it expects silver prices will rise for a second year running thanks to strong buying by institutional investors.
"The weak US rate outlook is the bedrock for a rally in precious metal prices," said Neil Meader, research & consultancy manager, launching the group's new Silver Focus 2017 at an event last week near London Bridge in the City financial district.
Furthermore, a possible correction in equities and "capped upside" for the US Dollar against other major currencies – thanks in part to an improved situation in the Eurozone – could also support silver prices, together with numerous global political risks.
So despite silver's decreasing demand and a "large and growing" surplus of supply, the annual average price could rise 7% to $18.30 per ounce across 2017 reckons Metals Focus, mainly driven by inflows to silver exchange-traded products (ETFs such as the iShares Silver Trust (NYSEArca:SLV)) and demand from institutional investors.
Should silver manage to rise in price for the second year in a row, Meader went on, the trend for institutional investment could "snowball", attracting "momentum traders" to buy the precious metal and push prices higher again despite the fundamental excess of total supply over demand. 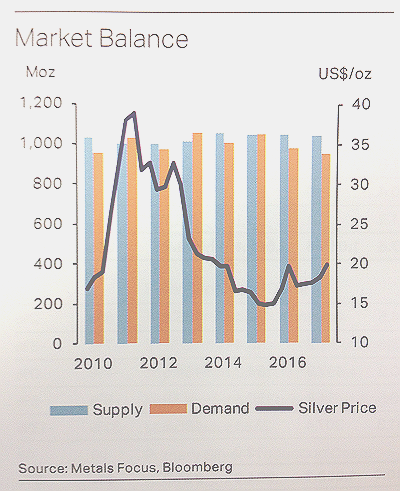 Silver supply already flat-lined last year from 2015 on Metals Focus' data, as the 3% average annual increase in mine output since 2010 came to an end. This was mainly due to lower by-product output from gold mines, said Meader.
The analysts now expect the first supply decline in 15 years in 2017, albeit limited to only 2% with growth then resuming in 2018.
Demand, in contrast, will suffer an "uncomfortable decline" of 6% year-on-year, led by lower consumption in the US and India – the world's top two silver-consumer nations.
Physical demand in India dropped by a whopping 58% last year as silver imports fell from the all-time high reached in 2015.
In the United States, sales of Silver Eagle coins made by the US Mint fell 20%, with a "wave of profit taking" by retail investors selling their coins when silver prices rallied above $21 per ounce after June 2016's UK Brexit referendum shock.
Metals Focus also note a "continuing structural shift" in US silver investment demand from coins to rounds, which have no face value and come from privately-run mints, and so are usually cheaper due to their higher availability and their lack of official status.
In total, global physical silver demand sank 11% in 2016 according to the latest Silver Survey 2017 by research company Thomson Reuters GFMS. Published for the Washington-based Silver Institute, that report says demand fell mainly on weaker interest for jewellery, silverware and retail investment products.
Bucking the trend was industrial demand, the largest component of physical silver use. It grew 8% to a 5-year high in 2016 but stayed below the all-time record of 2008 due to ongoing thrifting and substitution in electrical, solar and other technological uses, still responding to the record-high silver prices of 2011.
Reporting 7 consecutive years of silver market deficits in contrast to Metals Focus data, GFMS expect silver demand will drop by approximately 3% in 2017. Again this will be led by flagging interest in the US and India, plus lower demand from the photovoltaics (PV) industry which reached a new record high of 76.6 million ounces in 2016.
Metals Focus' bullish outlook for 2017 silver prices matches the average forecast provided by participants in this year's forecast competition from trade-body the London Bullion Market Association (LBMA).
Those analysts and traders forecast on average a 7.1% increase this year for silver from its January level, compared to a 5.3% rise in gold.