END_OF_DOCUMENT_TOKEN_TO_BE_REPLACED

IF YOU believe in honest money and free markets that discover prices without the heavy, dead hand of the Fed on the scales, then you're going to hate what I'm about to say, writes Dan Denning, co-author of the Bil Bonner Letter.

Not only is quantitative tightening (QT) dead, quantitative easing (QE) – buying stocks, bonds, and real estate with money conjured out of thin air – may be here to stay.

In early February, San Francisco Fed President Mary Daly floated around the idea of making "the balance sheet" a permanent part of the Fed's toolkit. By that, she means the Fed creating money (from nothing) to buy stocks and bonds (claims on earnings or future income payments).

Remember, the asset side of the Fed's balance sheet expanded to over $4 trillion during the bailout of Wall Street and shareholders post-2008. And if the Fed were to buy riskier assets – especially, say, corporate bonds – it would force prices for these assets up...and the interest rate paid by them down. (Prices and interest rates move inversely in the bond market.) 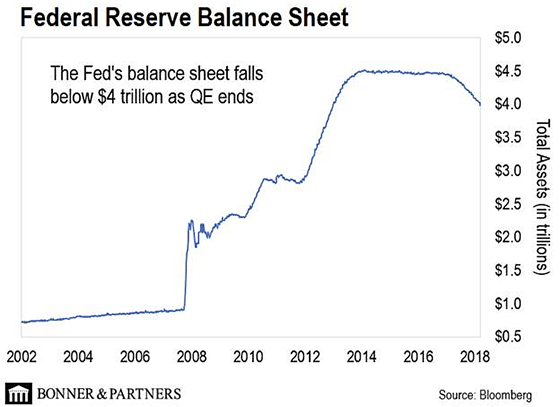 So old-fashioned investors seeking income or yield – or pension funds relying on higher-yielding debt for their actuarial models to deliver future payouts – must then take greater risks with their capital to find yield. Or, they could just buy stocks and hope capital gains make up the difference.

The Fed calls this whole process "the wealth effect", or the idea that, so long as stock prices go up, investors "feel" wealthier and the economy is "better off".

And as I mentioned earlier, Daly thinks QE might be worth keeping around. Speaking with reporters in San Francisco she said:

"An important question is, should those always be in the toolkit? Should you always have those at your ready, or should you think about, those are only tools you use when you really hit the zero lower bound and you have no other things you can do?"

By "those" Daly meant the bond-buying programs from the original versions of QE.

Now, I don't know Mary Daly. And it's not my intention to draw any conclusions about her moral fiber or the content of her character. But I think you can safely assume her questions aren't rhetorical.

They're a trial balloon – a way of telegraphing to investors and the public that the Fed may go down the path the Bank of Japan has gone...

The Fed will use the balance sheet as another tool to control prices, prop up financial markets to prevent a mean-reverting crash, and work slavishly on behalf of financial asset owners for as long as possible. It will go "Full Retard", as Bill would say.

And Daly elaborated, saying, "You could imagine executing policy with your interest rate as your primary tool, and the balance sheet as a secondary tool, but one that you would use more readily. That's not decided yet."

Right. It's not decided yet...

We'd never commit to supporting financial markets with even crazier and riskier financial policies. I would say that you can "take it to the bank" that the Fed will make QE permanent, but banks just aren't that reliable anymore.

Let's not forget the price of all this. As Bill has been reporting in the Diary, there is no "we". "We" did not get richer thanks to the Fed's extraordinary monetary policy. Stockholders did, particularly the ultra-wealthy.

The other thing Bill has gone to great lengths to demonstrate is that the Fed does not create wealth. It can only take wealth from others and give it to somebody else.

In this case, it took the prospect of earning decent interest on your savings account away from ordinary Americans and gave even more wealth to Wall Street and the One Percent.

I call this the "financialization" of the American economy. And it's tearing the country apart politically. But the Fed has decided to make it worse, as a matter of policy.