END_OF_DOCUMENT_TOKEN_TO_BE_REPLACED

Fiat currency compared with gold, oil and other valuable assets...

YOU CAN FIND countless tips on how to make money, says John Lee at GoldMau. But this article is not about that.

Rather, I want to examine the definition of money itself – what makes good money, and how some bad monies stay bad while others have become acceptable through new ideas and technology.

Then we can talk about how money and currency will evolve in the future.

Money is anything that is generally accepted as payment for goods and services and repayment of debts. The main uses of money are as a medium of exchange, a unit of account, and a store of value.

The Greek philosopher Aristotle (384-322 BC) was a student of Plato and teacher of Alexander the Great. He discovered, formulated, and analyzed the problem of "commensurability", or how different things can be measured in the same units. He wondered how ratios for a fair exchange of different things could be set. He searched for a principle that makes it possible to equate what is apparently unequal and non-comparable.

Aristotle found that money, as a common measure of everything, makes things commensurable and makes it possible to equalize them. In the form of money, he says, a substance has a telos, a purpose, and that in creating money individuals have devised a unit of measure on whose basis fair and just exchange can take place. Aristotle thus maintains that everything can be expressed in the universal equivalent of money, and argues that money was introduced to satisfy the requirement that all items exchanged must be comparable in some way.

Within such a frame work, Aristotle defined the characteristics of a good form of money – which must be:

Throughout history, of course, we have seen people adapt various forms of money using different objects. Here are some examples with relative merits denoted. 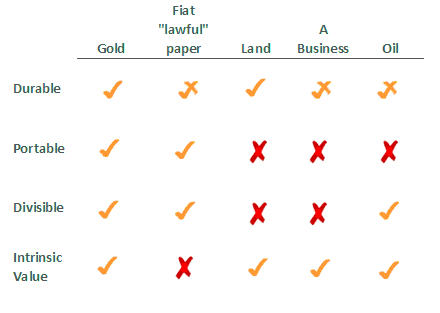 Gold Bullion has been repeatedly used money for over 5,000 years, only losing this role over the last 50 years, because it is valuable, durable, divisible and relatively portable.

One couldn't treat oil as money, for instance, since it is not exactly durable and portable. Neither could one use a business (such as a restaurant) as money, since it is hardly divisible or ever lasting. A thousand years ago, the ownership title of a land parcel or a business was merely a piece paper for decorative purpose and a registry for the tax collector. The oldest existing stock certificate was issued in 1606 for a Dutch company (Vereinigte Oostindische Compaignie) seeking to profit from the spice trade to India and Far East. Though very profitable in its day, when the company was dissolved in 1799, it was some 10 million Dutch guilders in debt.

American Stock exchanges were introduced in the early 18th century and weren't prominent until the 19th century, when globalization expanded massively with new technology leading to giant cargo ships, transcontinental pipelines and air travel. Today over 50% of US households own stocks collectively worth over $10 trillion. But it's only in the last 15 years that an average person can access instant world news and buy stocks with few computer clicks thanks to the internet.

Hundreds of millions of people around the world now own publicly traded stocks collectively worth over $40 trillion. Over 5 trillion dollars worth of US mortgages have been securitized and are now owned by other world citizens, acting as lenders. Title certificates to commodities stored around the world are valued in the hundreds of billions on various commodity exchanges. 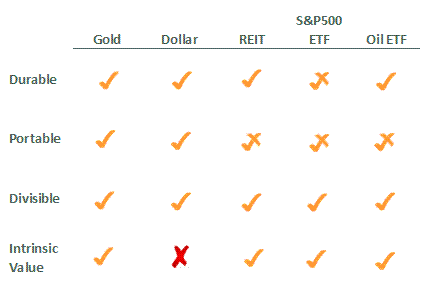 Now oil, which has always carried intrinsic value but difficult to store and exchange for other goods, all of a sudden becomes a viable medium of exchange and store of value through the advent of instruments like the Oil ETF.

Crude oil is stored in a warehouse and your digital ownership certificate is tucked safely in your brokerage account, which you can practically instantly exchange for anything else you want, whether it be Microsoft, Gold Bullion, wheat, air tickets and hotel rooms, only relying on dollars to calculate the exchange ratios and enable the exchange from one asset to another. Thus the role of currency has diminished greatly as various assets once thought to be non-divisible, non-portable, and non-durable are gaining popularity and being saved in lieu of traditional money.

Real estate investment trusts, for instance, allow you to "store" real estate around the world and sell in any increment you like. The S&P ETF allows you to own a piece of America's 500 largest companies with auto rebalancing. You can also own Japan, banks, wheat, motion picture producers...anything you desire with transparency, liquidity, and low transaction costs.

These assets are becoming more attractive as store of value with enhanced trading volume, portability, durability and divisibility. Why? Because money must be a good store of value by definition.

Fiat paper currencies remain popular, since they are convenient and can be created at will to please the public. However, fiat money fails the all important "intrinsic value" test, as its value is solely derived from legal tender laws. Compliance with such law rests on the credibility and strength of the issuing authority. And as we know, government and political factions can rise and fall faster than pop stars. So it's no surprise that no fiat money has ever survived over time, and they can never be viable money regardless of technological breakthroughs or other human advances. 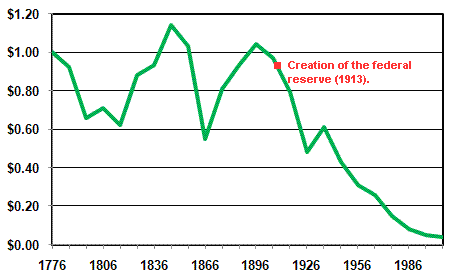 What Aristotle described as good money 2,000 years ago, in contrast, has not changed. Sound money must be a good medium of exchange as well as a store of value. Assets such as oil or land, which once weren't considered to be good forms of money due to poor physical or liquidity constraints, have received renewed interest thanks to novel ideas and innovative technology. The internet and various pooled products (such as Gold ETFs) on world markets enable more goods to be transacted with ease, speed, transparency and lower costs amongst world buyers and sellers.

The role of fiat money is vanishing. This morning, I sold Newmont Mining to book a hotel in Hong Kong without owning dollars for more than a few minutes. I don't own many dollars, or Euros or Yuan at any time. Fiat money carries a hefty premium for being widely liquid but a bad store of value. There is no reason to keep any money without intrinsic value.

My view on gold from this evolution is mixed. On the plus side, gold will crowd out inferior fiat currencies at a faster pace. On the minus side, the choices of store of value have expanded vastly, potentially reducing gold's role to being a fair medium of exchange.

Consequently I don't see the combination of a $2,000 an ounce Gold Price, crashing stock markets and $30 a barrel oil lasting for too long. Because if that happened, I'd be selling gold and storing oil for future payment. How could I make payments directly in oil, without going through fiat currency? One can already make payments online with digital gold [Ed.Note: Trail-blazing programs include Goldmoney.com, Pecunix and e-Gold; the range of potential payees is of course limited to the number of companies also using such programs] and I wouldn't be surprised if someone invents a way to pay merchants with a share of Disney stock, or a slice of someone else's mortgaged backyard through a digital land token.