END_OF_DOCUMENT_TOKEN_TO_BE_REPLACED

I urge you to check out the entire piece when you have the time, but there are a few salient points I want to share with you here.

In the opinion of Lucas White and Jeremy Grantham, the paper's authors, "prices of many commodities will rise in the decades to come due to growing demand and the finite supply of cheap resources," presenting an attractive investment opportunity. Over the long-term, resource stocks have traded at a discount and outperformed their underlining metals and energy by a wide margin.

According to White and Grantham, a portfolio composed of 50% energy and metals, 50% all other equities, had a standard deviation that's 35% lower than the S&P 500 Index. What's more, the returns of such a portfolio outperformed those of the S&P 500, resulting in a risk-adjusted return that's 50% higher than that of the broader market. 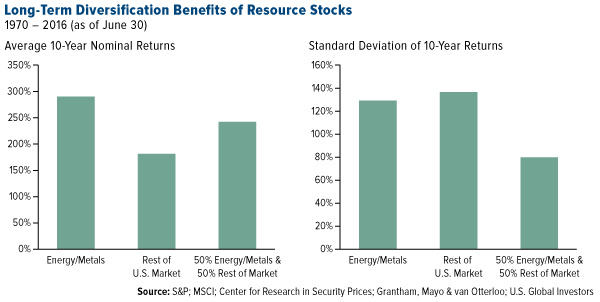 Resource equities have also historically shown a low to negative correlation to the broader market, which might appeal to bears. The reason? When metals and energy have risen in price, it's been a drag on the economy. The reverse has also been true: Low prices have been a boon to the economy.

The thing is, general equities currently do not give investors enough exposure to natural resources. The weight of energy and metals in the S&P 500 has been halved in the last few years as oil and other materials have declined. Considering the diversification benefits, investors should consider a greater allocation to the sector.

There's mounting evidence that now might be an opportune time to get back into resource stocks. Following the sharpest decline in crude oil prices in at least a century, as well as a six-year bear market in metals, the global environment could be ripe for a commodity rebound. From its January trough, the Bloomberg Commodity Index has rallied 17%, suggesting commodities might be seeking a path to a bull market.

During the down-cycle, many companies managed to bring costs lower, upgrade their asset portfolios and repair their balance sheets. As a result, many of them are now free cash flow positive and are in a much better positon to deliver on the bottom line when commodity prices increase.

I've often written about the imbalance between monetary and fiscal policies. My expectation is that unprecedented, expansionary global monetary policy will be followed by fiscal expansion. Consider this: Total assets of major central banks – including those in the US, European Union, Japan and China – have skyrocketed to $17.6 trillion Dollars as of August 2016, up from $6.3 trillion in 2008. 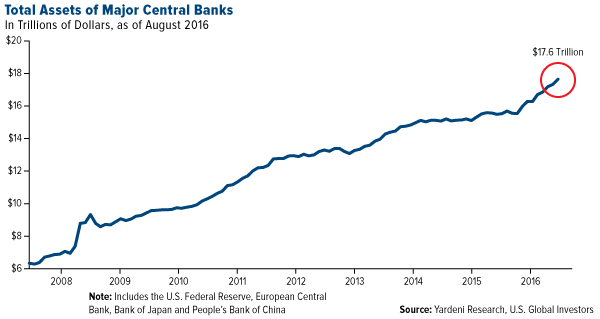 This expansion is expected to result in significant inflation gains over the next decade, an environment in which natural resource stocks have historically outperformed the broader market.

China largely drove the global infrastructure build out over the past decade as rapid economic growth and rising incomes increased the demand for "advanced" and "quality of life" infrastructure. This resulted in a breathtaking commodities bull market.

Now, other advanced countries, the US especially, are readying to sustain the next cycle to repair its aging and uncompetitive infrastructure.

As you can see, most major economies dramatically cut infrastructure spending after the financial crisis, indicating it might be time to put some of that $17.6 trillion to good use. 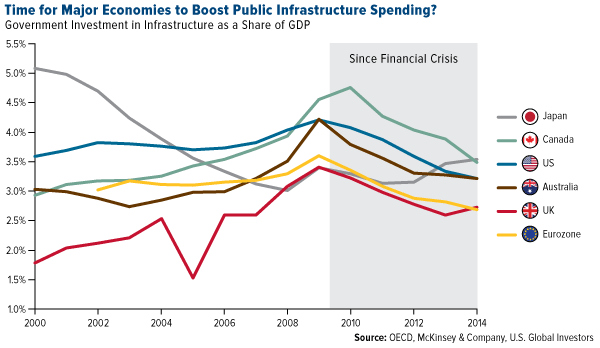 According to the Center on Budget and Policy Priorities (CBPP), the US is presently facing a funding gap of $1.7 trillion on roads, bridges and transit alone – to say nothing of electricity, schools, airports and other needs. Meanwhile, state and local infrastructure spending is at a 30-year low.

If this financing can't be raised, says the American Society of Civil Engineers (ASCE), each American household could lose an estimated $3,400 per year. Inefficient roadways and congested airports lead to longer travel times, and goods become more expensive to produce and transport.

Let's look just at national bridges. After an assessment of bridges last year, the American Road & Transportation Builders Association (ARTBA) found that 58,495, or 10% of all bridges in the US, are "structurally deficient." To bring all bridges up to satisfactory levels, the US would currently need to spend more than $106 billion, which is six times what was spent nationwide on such projects in 2010.

Fortunately, both US presidential candidates have pledged to boost infrastructure spending – one of the few things they share with one another. Hillary Clinton says she will spend $275 billion over a five-year period, while Donald Trump says he'll spend "double" that.

Trump's central campaign promise, as you know, is to build a "big, beautiful, powerful wall" along the US-Mexico border, which analysts at investment firm Bernstein estimate could cost anywhere between $15 billion and $25 billion, requiring 7 million cubic metres of concrete and 2.4 million tonnes of cement, among other materials.

As I like to say, government policy is a precursor to change. I'll be listening closely for further details on Trump and Clinton's infrastructure plans this coming Monday during the candidates' first debate. I hope you'll watch it too! Media experts are already predicting Super Bowl-sized audiences.

In the past year, a lot of ink has been devoted to China's slowdown after its phenomenal spending boom over the last decade, but there are signs that spending is perking up – a tailwind for resources. According to the Wall Street Journal, Chinese economic activity rebounded in August, driven by government spending on infrastructure and rising property taxes.

The Asian giant still accounts for a large percentage of global trade in important resources such as iron ore, aluminum, copper and coal. This is why we closely monitor the country's purchasing manager's index (PMI), which, according to our own research, has been a reliable indicator of commodity price performance three and six months out.