END_OF_DOCUMENT_TOKEN_TO_BE_REPLACED


"Christmas is coming, the champagne's getting flat;
"Please put a penny in the old broker's hat..."
– David Phillips, The Chart Prophet

ONE OF THE BIG stumbling blocks for investors thinking about gold is that it doesn't offer to pay any income.

That's why bone-headed gold schemes turn up like Simon Cowell at a botox clinic.

But just as better living through chemistry can make you smile for a while, so "enhancing" the Gold Market looks doomed to leave your face sagging in the end. Gold Link Income Plus, a Sydney-based fund manager that floated on the ASX in July 2005, raised some A$150 million from investors (US$129m) since opening in 1998.

Now it's got barely one dollar in seven to give back.

The 86% loss came after "seven really good years and one bad year," as the founder, Richard Kovacs, told The Australian in early December. "That big loss has destroyed my business and my credibility."

It has also left with A$20m earned in nine years, apparently, and the multi-level marketing-type name should have given it away – Gold Link Income Plus. But you might struggle, as we do here at BullionVault, to see quite how "gold" and "income" can ever sit together in the same product. Not one that actually keeps working, that is.

"The age old problem with bullion," as the Sydney Morning Herald announced to its readers in Feb. 2006, "is that while gold might be pretty to look at, it hasn't paid interest or dividends.

"No more. Gold Link's Income Plus Fund trades like a share (code: GLI) and pays a fully franked dividend four times a year – totaling 10 cents – by borrowing gold cheap from central banks and selling it in the futures market and investing the proceeds."

Or rather, according to The Australian in its report at the start of this month, "the company operated a trading strategy betting that volatility, or fluctuations, in Gold Prices would remain constant or increase."

Whichever route Gold Link actually followed into gold options, as the Gold Market has soared since mid-2005, it also took a series of breathers, knocking volatility lower and destroying anyone betting that volatility would keep rising.

"The scheme wasn't model driven [and] it wasn't human error," pleaded Richard Kovacs in late November, just before the rest of the Board joined him and quit on the eve of an angry shareholders' meeting.

"The fact is," Kovacs went on, "the global options market fell and fell from late 2006 into 2007 and that adversely affected the value of our portfolio." And he was so close to getting it right!

Price volatility in the Gold Market has since shot higher. "One-month volatility rose from a low of 10.8% in July to 17.4% in November," notes Jessica Cross in the latest Yellow Book from Virtual Metals. "Day-for-day," agrees Wolfgang Wrzesniok-Rossbach at Heraeus – the German refinery group – "the inter-day movements in Gold Prices have been larger than what used to be the complete trading range for a whole quarter."

"And within this highly volatile market," he adds, "gold continues to hold on to its generally upward trend."

Indeed, holding physical bullion – and leaving it well alone – would have matched the 15% yield squeezed out by Gold Link Income Plus pretty well over the last half-decade, for US investors at least.

Gold hit new record highs for Australian owners in November this year, just as it did British gold buyers. Anyone trading in US Dollars, meantime, could have enjoyed an annual "income" from gold – selling their gains each New Year's Eve, and then using that yield to live off for the coming 12 months – of 17.6% gross on average since the start of 2003. 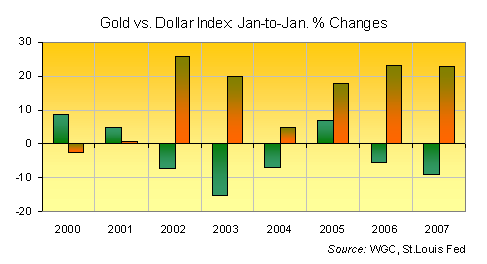 In a bull market this strong, why meddle with options at all? Why not just Buy Gold and hold it?

Well, firstly of course, only an idiot would put all of his money into a non-yielding asset – or so your financial advisor would say. (Just ask him yourself; he could probably do with a laugh this Christmas.)

Second, there was no guarantee the price of gold would keep rising, but with Gold Link's system, it "[was] not essential for the gold price to rise," as the Sydney Morning Herald noted at the start of 2006. For the first couple of years, Gold Link managed to make bankable cash out of flat and even falling gold prices.

Last, but not least, running a complex gold-trading program pays management so much more when you're doing something clever that your investors don't quite understand.

"Since it started six years ago," the SMH added in 2006, Gold Link "has posted an annual pre-tax return of about 15% after taking out the 1.75% management fee and a quarterly 15% performance fee."

Now you're talking! Fifteen per cent of your clients' profits – plus a 1.75% annual yield from their investment dollars – sure beats scraping by on 0.8% dealing commission like we do at BullionVault. (Our gold-dealing fees fall to 0.4% and then down to 0.02% for bigger, more active traders.)

"It simply beggars belief that Mr Kovacs has continued to claim these huge fees as manager despite the huge losses," says David Woodiwiss – one of 3,000 investors now expecting the return of just 20¢ on the dollar, rather than a return of 15% per year – to The Australian in early December.

Richard Kovacs is reckoned to have paid himself more than US$17m for running these funds into the ground. But to be fair, he was worth every penny – as along as it lasted – for squaring the circle of gold vs. income.

You see, financial service firms the world over hit a big problem when they give in to demand and sell gold to private investors. For the damned stuff flatly refutes everything else your financial advisor will tell you.

First, gold doesn't pay you an income. Indeed, it costs you to own it unless you buy "unallocated" gold, swapping your storage fees for risking your gold on somebody else's balance sheet.

The charges for owning gold outright, on the other hand, can soon add up to 2% or more of your bullion's value each year. That soon eats into your wealth faster than most actively-traded mutual fund fees.

So capital appreciation – in terms of your domestic currency – remains the gold buyer's one hope. And this lack of income sets gold, like all base commodities, far apart from the paper bonds and equity shares that pay brokers their fees and set up commission trails for advisors.

Even if a stock holder doesn't receive a dividend this year, at least he or she can expect stock-price appreciation as the rest of the market bets on future returns showing up soon after the board chooses to split profits with the company's owners.

At least, that's what Google stockholders must be telling themselves...up there at a price of 54 times earnings right now.

The net result of dividends or capital growth, however, can sometimes prove hard to distinguish. It's a cash gain either way, whether realized or not. And your financial advisor will always advise that real, long-term wealth comes from rolling this year's earned income back into your holdings.

Re-investing your dividends like this will then sprinkle the magic of compound interest onto your wealth – "the eighth wonder of the world," as Albert Einstein once said. And who'd want to turn away Tinkerbell?

But once you've built up your wealth, you can't eat re-invested income. Which is why retirees and pension fund managers know only too well the financial industry's other great standby:

Stocks are for growing your money; bonds then pay out in retirement.

Like most received wisdom, however, this is simply "a bad idea whose time has gone," as Linda Stern writes for Reuters.com. The theory that "retirees should keep a lot of their money safe in bonds" just doesn't stack up, she explains, pointing to a study by Tom McGuigan at the Burns Advisory Group in Connecticut. He tested different portfolio mixes against typical retirement withdrawals, testing them over a range of three-decade periods, and starting with a 5% drawdown in the first year.

These imagined withdrawals then grew by the rate of inflation each year...and McGuigan's got bad news for anyone hoping to eat or keep warm at, say, 90 years of age after retiring at 60:

Putting all of your money into the S&P, even during the greatest bull market on record, would have fed and clothed you with only a 69% success rate. "The only portfolio that had a 100% success rate," the study found, "was a completely diversified portfolio of stocks that included shares of large and small companies and growth and value companies."

Looking ahead today, however, pensioners and near-retirees – as well as pretty much everyone else trying to grow their money in 2008 – have got to wonder: What happens to that 100% strike-rate for broadly invested stock holders if growth now gives out?

Nearly one-third of retirees holding just S&P500 stocks would have come up short since the end of the 1960s. The only sure route to surviving the full 30 years of McGuigan's study was to allot a portion of money to small-cap and growth shares as well.

But cut out the '80 and '90s boom in growth shares, and how many "completely diversified" stockholders would have spent the last few years of their life eating from trash cans instead of feasting at Tootsies?

Throw in the gnawing inflation – and falling stock earnings – of '70s-style stagflation, and you might come to ask whether stocks now offer anything near a livable income for retirees today.

Trying to live off an "income" paid by gold bullion, in contrast, is a crazy idea no financial advisor would dream of. But at least the dead metal preserved wealth throughout the Seventies. If inflation keeps rising on the fresh tide of Fed rate cuts, gold might just beat stocks and bonds yet again in 2008.