END_OF_DOCUMENT_TOKEN_TO_BE_REPLACED

Red-hot demand, shrinking supply, massive inflation...
THIS SUMMER you may have watched a man fly without a plane or hang glider, writes Frank Holmes at US Global Investors.
David Blaine, the illusionist and endurance artist, soared over the Arizona desert by holding onto 50 giant helium balloons. The stunt, called "Ascension", lasted about an hour, during which Blaine reached a maximum altitude of 24,900 feet, or about 4.7 miles, before parachuting back to earth.
What made his flight possible, of course, was helium, the lighter-than-air stuff that makes your voice sound like Mickey Mouse's.
Many people may not be aware that the gas is used for much more than filling birthday balloons.
Helium plays a critical role in a number of high-tech applications, from barcode readers to semiconductors to liquid-crystal display (LCD) panels. Magnetic resonance imaging (MRI) machines can't work without it. Google, Netflix and Amazon have been buying massive quantities of it for their data centers.
So why am I talking about helium right now and not gold or oil or copper? Like those other raw materials, helium is an important but finite resource that must be extracted from the ground. In fact, it's exclusively a byproduct of natural gas mining.
Also like gold, new large helium deposits are becoming fewer and farther between, even though we've only known about the element since 1868, a little over 150 years ago. We've only been mining it in earnest since 1915, when the US Army built the first helium extraction plant at the Petrolia Oilfield in North Texas.
As a result, supply is getting tight. Helium is notoriously difficult and expensive to store, for the very good reason that it escapes every known container over time.
Ever wondered why balloons lose their helium so fast? It's because the gas's atomic radius is so small, it can literally diffuse through any solid. Much of it floats up into the upper atmosphere and eventually gets torn away by the solar wind. Helium is the second-most abundant element in the universe, and yet the day is fast approaching when it may no longer exist on Earth.
Did you know the US has a National Helium Reserve in Amarillo, Texas? Despite the plant having the capacity to hold over 1 billion cubic meters, its reserves are projected to be depleted within two years, according to Desert Mountain Energy, a North American explorer of the gas.
As I've said a number of times in the past, one of the most attractive investment cases of gold is that it's an extremely rare commodity. Peak gold is here, even as demand for the yellow metal remains steady, and over time this will help support prices.
Investors seeking exposure to gold have other options than physical bullion. There's individual gold mining stocks, futures, mutual funds and ETFs.
Investors interested in helium aren't so lucky. There's no helium futures [or physical] market that I'm aware of. Explorers and producers are your best bet.
Operating in the US Southwest, particularly in Oklahoma and Arizona – the "Saudi Arabia of helium" – Desert Mountain is up around 640% year-to-date on growing speculation of its prolific Holbrook Basin project in eastern Arizona, first leased in late 2017. This month the company announced "significant" helium percentages at two of the project's wells, which is highly encouraging. 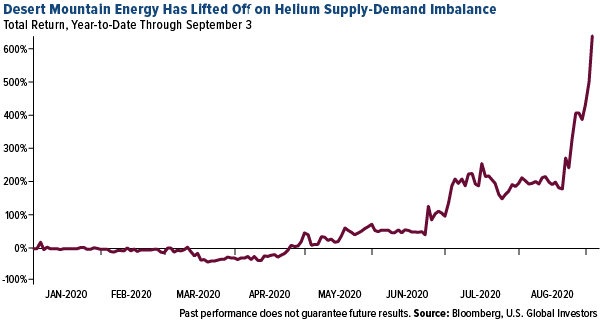 The jump in share price fits in neatly with the "Lifecycle of a Mine" thesis, whereby mining stocks rise and fall depending on which phase of exploration or production a project is in. In the past I've discussed this investor behavior as it applies to gold stocks, but it also applies to any commodity, including helium.
Helium isn't the only commodity that's surging on greater demand right now. Copper and iron ore are both up as manufacturing activity around the world continues to recover following the lockdowns. The manufacturing PMIs in the three largest economies – the US, China and Euro area – all registered above the key 50.0 mark in August, indicating expansion. The PMI for US factories hit an incredible 56.0, the fastest pace since late 2018. 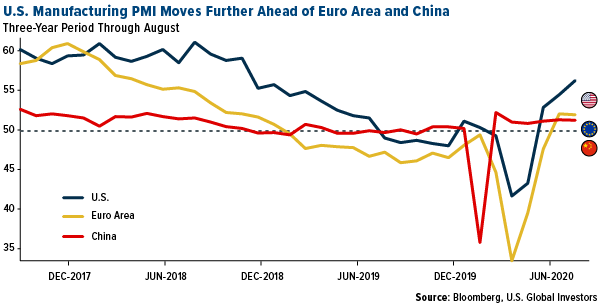 New orders in particular have increased, meaning demand for industrial metals has also improved. The price of copper has surged 41% since the March lows and closed at a two-year high of $6,697 per ton in London trading last Wednesday. Meanwhile, iron ore futures on China's Dalian Commodity Exchange traded at nearly $126 last week, up 70% from its April 2 low.
Gold may be off its record high of more than $2070 per ounce, but the long-term investment case remains strong, not least of which because of peak gold production. Currency debasement is still a great fear as the Federal Reserve continues what is essentially the fourth round of quantitative easing (QE).
According to Bloomberg, the Fed has now purchased more than $1 trillion of mortgage-backed securities (MBS) since March. Not only is that a record pace of money-printing, but it's also inflated the Fed's balance sheet. Believe it or not, the central bank now owns almost a third of all bonds backed by home loans in the US

On the fiscal side, things are just as elevated. According to a report last week by the Congressional Budget Office (CBO), the amount of federal debt as a percent of gross domestic product (GDP) is on pace to hit, and exceed, the previous record set during World War II. Total national debt stands at a mind-boggling $26.7 trillion, or more than $214,000 per US taxpayer.

It's starting to look as if appetite for another $1 trillion-or-more coronavirus relief package is waning among lawmakers and the President. Even so, the budget is near levels unseen in this country, with interest payments alone totaling more than $338 billion. This makes gold more attractive as a hedge against devaluation.
In a recent post, I ran a poll asking if readers believe the headline consumer price index (CPI) accurately measures inflation in the US.
One hundred ninety-one people took the poll, and of those, a whopping 86% said they believe inflation is much higher than the monthly figure provided by the Bureau of Labor Statistics (BLS). Thirteen per cent said they mostly agree with the CPI, while only 1% said they believe inflation is really lower than the headline figure. 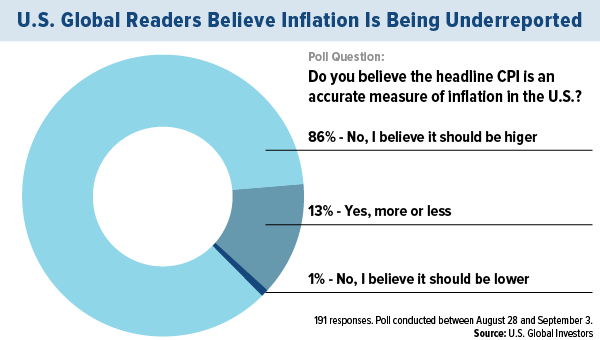 I think these results are very telling. Few people, according to the poll, have faith in the current process to measure inflation, with a vast majority believing prices are rising at a faster rate than we're being told.
Again I ask you, if you believe inflation is being unreported, why wouldn't you have gold and gold mining stocks in your portfolio?