END_OF_DOCUMENT_TOKEN_TO_BE_REPLACED

SOME OF THE most important data we gather and analyze each week is buried deep inside tedious lists of numbers, writes Gene Arensberg in his Got Gold Report.

These data, compiled by seldom-thanked dedicated public servants and distributed via the web to anyone with a computer, can be an astonishing wealth of information for traders and analysts – if they know what to look for. Taking that data, following it and producing meaningful graphs is part of what we do here at Got Gold Report.

Once in a while something extraordinary jumps out at us and this is one of those times. The following may be tedious to follow for some, but we hope we have made the fascinating and potentially exciting divergence we just discovered come to life for you in the graphs as it has for us in the data. Hopefully it turns tedious into interesting.

In the traditional Commitments of Traders Reports (COT) issued each week by the Commodities Futures Trading Commission (CFTC), swap dealers are included in the "commercial" category. They are combined with the bullion banks and other large dealers. The commercial traders are primarily on the sell side of the gold market. In the newer, "disaggregated" COT reports the CFTC segregates swap dealers into a separate class.

Interestingly, in the most recent disaggregated COT reports, the largest commercial hedgers and short sellers, the much maligned bullion banks and largest dealers, certainly did take on a quite a large amount of new net short positioning for gold futures (read paper gold selling or what the CFTC defines as "hedging") as shown in the graph just below. 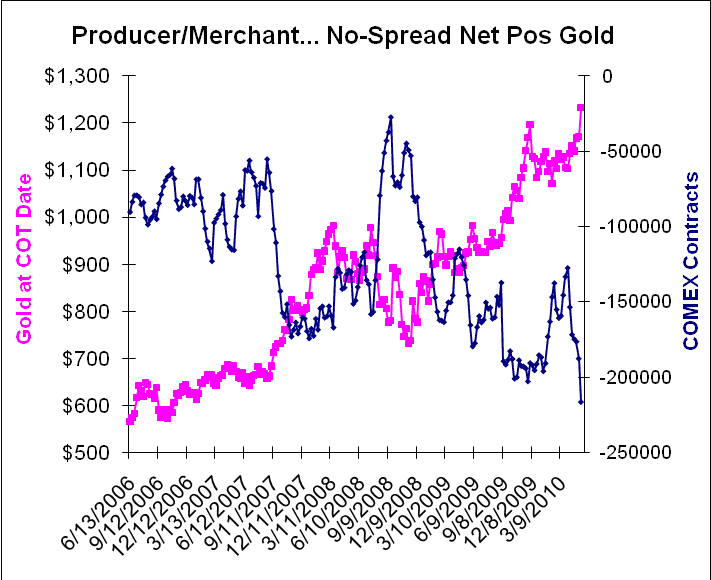 Remember these are just one class of the former category known collectively as "commercial". But the Producer/Merchant/Processor/Users are considered the biggest dogs in the Comex Gold Future and silver "pound" and we believe they operate under the largest of the exemptions to position size and accountability limits.

The exemptions to trading size limits are currently granted by the futures exchanges under rules promulgated by the US regulators, including the CFTC.

While the Producer/Merchant commercials are now at an all time high net short position for gold (as a distinct group) the Swap Dealers are now, believe it or not, 51,475 contracts LESS net short than they were on December 1, 2009 when they reported being net short 117,366 contracts with the open interest then 521,433 open, and gold trading then at $1,196.36. Incidentally the Producer/Merchants (PMs) were 190,865 contracts net short on December 1. The PMs previous record high net short position was on November 24, 2009 at 203,078 contracts. 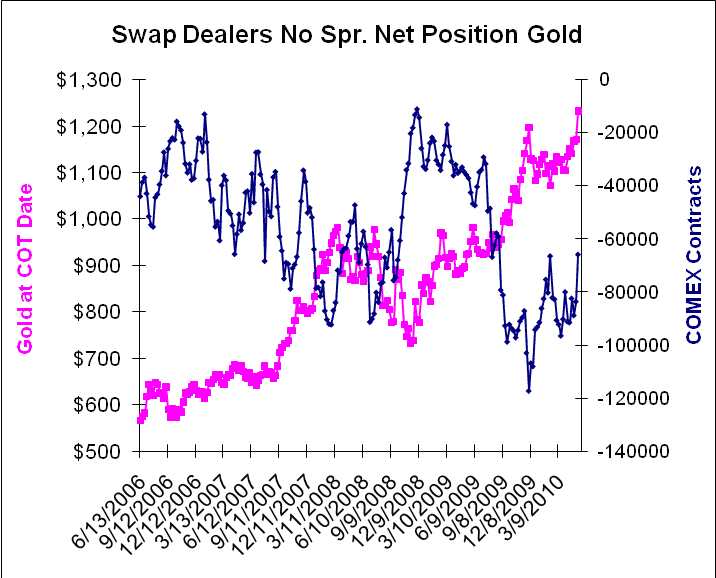 The December 1st report was a key period because it was just prior to the most recent gold correction.

December 1, 2009 was also when the swap dealers were at their highest net short positioning in our records. During that period – and just before that gold correction – both the Producer/Merchant and Swap Dealer categories of commercial traders held very high, near-record net short positions. Indeed from our observation point of view one could say they "agreed" in their expectations for lower Gold Prices if we can make such an assumption based on their respective positioning.

Yet at new all-time highs for the Gold Price in US Dollars once again, the producer/merchants added roughly 29,000 new net short positions last week, while the swap dealers actually covered or offset just under 18,000 contracts. So the latest COT report ends up showing a net "commercial" addition overall of about 11,000 contracts net short.

Below is the pertinent graph from that report showing the collective combined net short positioning of all the Comex commercial traders for reference. 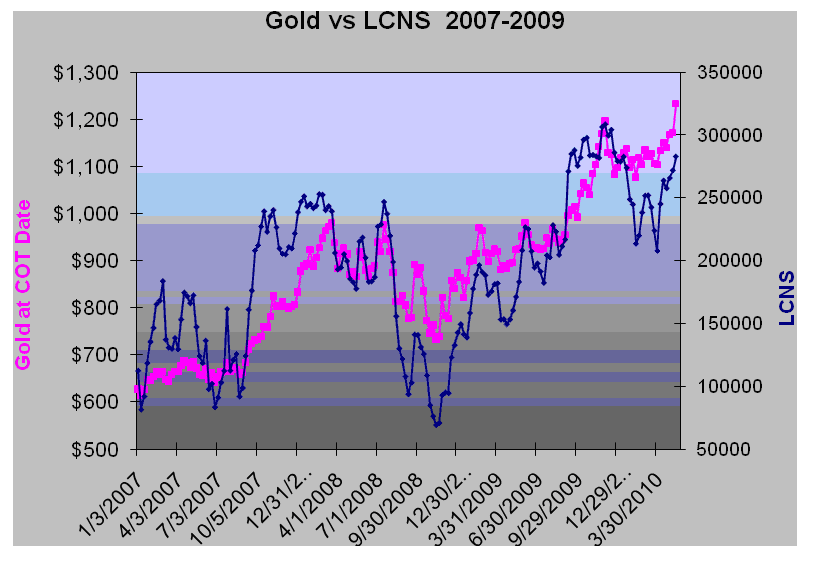 Since gold had just printed a new all time high close ($1,232.66) with this May 11th COT report, many analysts expected the collective combined commercial net short positioning (the LCNS) to be at or near a record nominal high.

Indeed it was a bit of a shocker for some that it didn't. But now, perhaps, we understand why it didn't. This past week, the swap dealer commercials seem to have broken ranks from the producer/merchants doing pretty much the opposite of them on a net basis.

Take another look at the first two graphs and one can easily see that contrary to the way these two distinct groups of commercial traders acted in November/December of 2009 (just before the gold correction then), as of Tuesday their expectations for lower Gold Prices seem to have diverged, at least somewhat.

In Texas English: The big, exemption-wielding bullion banks were still selling lots of paper Gold Futures this past COT reporting week, but the "other commercials" were doing the opposite on a net basis. In short, they are NOT in agreement this time. At least not yet. 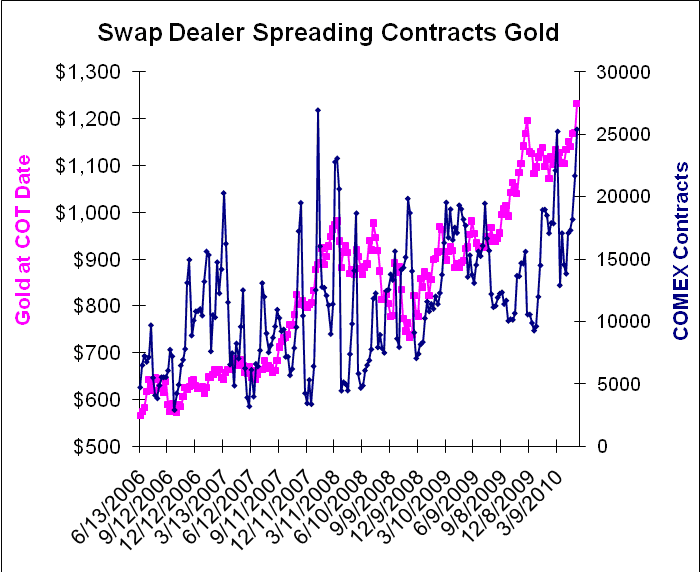 We think that it is now apparent that – at least on the Comex bourse in New York – the very largest of the Gold Futures sellers have now become more isolated as "the sellers of last resort" for gold futures. n particular, we are interested to learn that the big exemption-using bullion banks are not being joined by the "other commercials" – meaning the swap dealers – when they were indeed joined by them just ahead of the last really good correction for gold at the tail-end of 2009.

That doesn't mean that gold can't correct right here and right now; it certainly can. But if gold does drop, the swap dealers are now less well positioned for it. And it also means that at least as of Tuesday, there was apparently quite a bit less "horsepower" on the sell side for gold, with the big bullion banks operating as "sellers of last resort" amid the latest surge in prices...

Want to buy real Physical Gold outright and store it, securely, at very low cost with instant liquidity when you come to sell...? Start with a free gram at BullionVault now...