END_OF_DOCUMENT_TOKEN_TO_BE_REPLACED

EVER JUMPED on a bus in a strange city...only to wonder if the driver's taking you further away from your destination? asks Brad Zigler at Hard Assets Investor.

If you looked at the route map, you'd find a lot of backtracking along some local roads. So ultimately, you get to your destination, but you have to take some scenic detours along the way.

Like novice bus riders, many financial advisers and investors are feeling a little disoriented by the course their portfolios have been taking recently. Alarm bells are ringing as recent allocations to gold, made with a belief in the metal's historically negative correlation to stocks, are, instead, becoming more tightly correlated to equities.

To see what the kerfuffle's all about, take a look at the chart showing rolling 30-day correlations between Comex spot gold settlements and the closing value of the S&P 500 Composite.

Because since mid-2008, gold has undergone a transformation, becoming more of a fellow traveler with large-cap domestic stocks than a contrarian play. 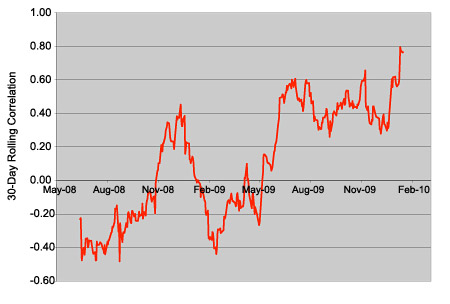 The S&P 500's correlation coefficient with gold would read +1.00 if the two were perfectly correlated, moving together exactly in lock-step.

And over the last 21 months, it's stutter-stepped its way from –0.48 to +0.79...a remarkable turnaround from negative correlation to a close connection.

There's no refuge from coincidence to be found offshore, either. The correlation of gold to the MSCI All-Country World Index (ex-US) is even tighter with gold than the S&P, having ranged from –0.43 to +0.89 in the past couple of years.

Luckily for owners of a more diversified portfolio, however, the trend for bonds has moved in the opposite direction. Gold's correlation to the Barclays Capital Aggregate Bond Index has gone from slightly positive (+0.03) to decidedly negative (–0.50) since mid-2008. 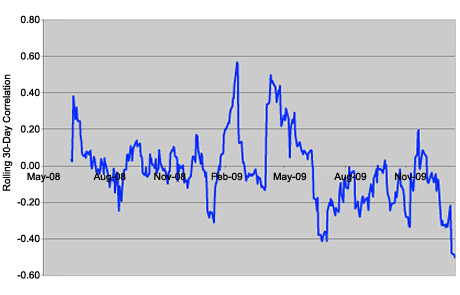 Well, yes and no. Short-term correlation is measured by comparing the degree and direction of daily price changes chalked up by differing assets. As you can see from the charts, there are times when gold's correlation moves in a positive direction and other times when the coefficient moves negatively.

Most recently, however – say, in the past month – gold's equity correlation has become strongly positive while gold's correlation to bonds moved dramatically in the negative direction. Compare that to the longer-term averages...

Each of these asset classes – Gold Bullion, US stocks and fixed-income bonds – have been reacted sharply to vagaries in the US Dollar's value. And so far in 2010, the Dollar has been resurgent as capital flows – particularly to US Treasury bonds – left the equity markets shaken and caused investors to shun gold in favor of the greenback.

Essentially, fear of the Dollar has been trumped by fear of everything else. This caused not only disparate performance in different asset classes, but breakdowns in the relationships between them.

"All fine and good," I hear you say, "But, what's this mean to me? How's this affecting my portfolio?"

So far, the tightening correlation between gold and equities hasn't been that costly; after all, equities over the past year haven't been a bad place to be. But it could become more noisome if it persists. Gold Bullion hasn't lost its diversifying power yet, however. And in a model portfolio consisting of 25% domestic stocks, 25% foreign equities, 40% domestic fixed income and 10% gold, the metal's ameliorative influence can be clearly seen over the past couple of years. 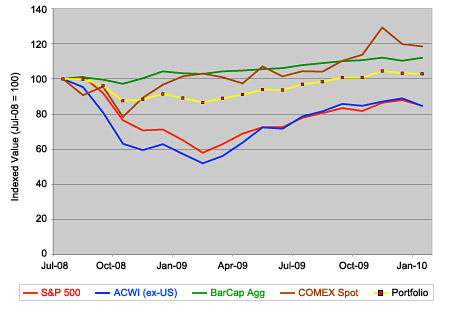 Yes, it is now starting to wane as gold's traditionally negative correlation with stocks has flipped round. But portfolio owners are naturally more concerned when correlations tighten between losing assets. Gold sinking alongside stocks is viewed as a problem; metal piggybacking on a climbing equity market doesn't seem so bad.

Only time will tell how long the current alignment persists. Investors and their advisers, like bus riders on a new route, can look back on their maps to chart the historic course of gold/stock correlations and take comfort in knowing that these coefficients will likely revert to their means.

Just be prepared for some back-and-forth along the way.

Start your Gold Investing with a free gram of secure Swiss gold at BullionVault now...