END_OF_DOCUMENT_TOKEN_TO_BE_REPLACED

Gold Prices reviewed with an adjustment for inflation...

The INEVITABLE QUACKING about gold being over-valued has begun as the Gold Price rises once more, writes David Galland, managing director of Casey Research.

I think a quick check-in with the historical perspective, starting with inflation adjusted Gold Prices, might prove useful.

The first of two charts that follow shows the long-term picture of Gold Prices from 1970 to the present, correctly adjusted for inflation. 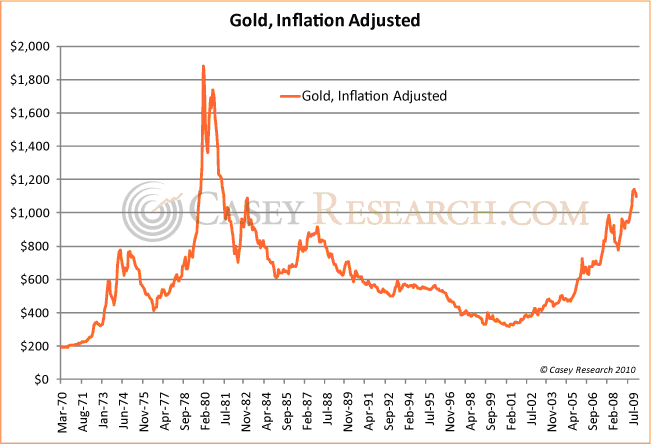 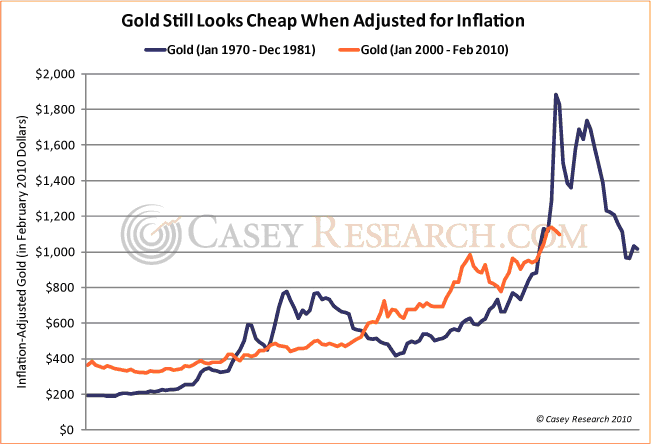 As you can see, if the current bull ends with the sort of grand finale we saw at the end of the last big blow-off, then prices have a long way to go from here. That said, a credible case can be made that this time around, the price could go much higher. 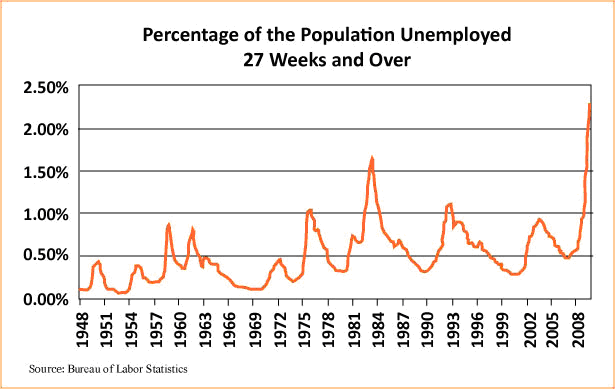 For starters, in the 1970s, the economy was in much better shape than it is today – though it wasn't good by any means. The chart here uses long-term unemployment as a proxy for that contention.

As you can see, at the end of the 1970s, the employment picture was quite healthy. Whereas today, in addition to wildly out-of-control debt on both the private and public levels, we have a massive problem with unemployment and the consequences of a burst housing bubble.

Thus, Paul Volcker's somewhat simplistic solution to inflation – and the trigger for the end of the last Gold Price bull market – was to seriously ratchet up interest rates. But that's now off the table. (Since we're trying to gain perspective, I'll remind you that at the beginning of the 1980s, mortgage rates topped 18%.)

But wait, I heard someone in the back shout, "There is no inflation today!" Wrong, there is unprecedented inflation – properly defined as an increase in the monetary base. What's missing, so far, is the inevitable consequence of the inflation – steadily rising prices.

That will come, and when it does, the government will find it is going into a gunfight with a (dull) knife – because raising interest rates in the Kingdom of Debt will lead to a predictable outcome.

Unfortunately, thanks to the inflation, interest rates are going up no matter what the government would prefer to happen, a contention of ours that is now gaining traction in the mainstream. And, yes, up to a point, history shows Gold Prices and interest rates moving upwards in concert.

Don't go crazy about Buying Gold, but by all means, if you don't own some, begin a monthly program of purchases. While it would be perfectly natural to see the Gold Mining stocks give back some of the big gains they have offered since last year's correction, any further corrections should be viewed as opportunities. But again, don't go overboard. If you have an investment portfolio with 20% to 30% in a combination of precious metals bullion, large-cap and small-cap stocks, you'll be well positioned – and protected – for what's coming.

Where to buy and store Physical Gold....? Get the safest gold at the lowest prices, starting with a free gram of gold at BullionVault now...