END_OF_DOCUMENT_TOKEN_TO_BE_REPLACED

Which is better – gold or farmland? Why not buy both...?

MY FRIEND Brad Farquhar is the co-founder of Assiniboia Capital in Saskatchewan, writes Chris Mayer in The Daily Reckoning. It invests in farmland there, among other things. He sends the following note:

"Of course, we track this and we are interested in what they have to say. No great surprises in their new data, but we also played around with it to see what else might pop out at us.

"Sometimes in my presentations I show a chart that demonstrates the correlation (within a range) of the Gold Price, oil and farmland in Saskatchewan. The correlation is pretty good. Farmland tends to lag a bit because it is a less-liquid asset class and not quoted daily. Also, one acre of farmland is not necessarily substitutable for the next acre the way ounces of gold and barrels of oil are.

"But as the next chart shows, the Sask farmland/gold ratio is getting well outside its traditional range. 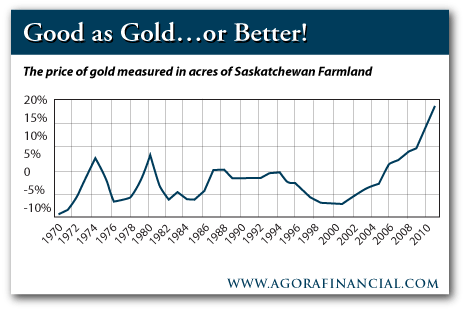 "With gold held at $1,500, the price of Sask farmland would need to move to $865 per acre just to get back within the normal historical range. The current price is $526 per acre, representing upside of 65%. Of course, we expect gold to move higher too, dragging all other real assets along with it."

Brad's firm has been in Saskatchewan farmland since 2005. It's turned out to be a good call. I have written about Saskatchewan farmland many times in the past...and I have been a longtime advocate of buying farmland. That's why I'm planning to visit Brad in Regina next month and have a look around. I'll have more to share with you on all of this soon, as well as ways you can participate.

There are many opportunities in Saskatchewan, which is an agricultural powerhouse. Saskatchewan exports a large percentage of the world's goods:

Like Brad, I remain a big believer in agriculture-focused investments as one of the very best "hard asset" allocations for the decade ahead. Ag investments not only provide a hedge against Dollar weakness, they also stand to benefit from extremely favorable supply-demand trends worldwide.

The world needs more food. It won't be easy to supply it. That's the kind of trend all investors should crave.

While it's true that you can't transport an acre of farmland or spend it as easily as a Krugerrand, neither can you grow lentils on a Gold Bar. If you have a hard time choosing between the two, buy both.

Buy Gold at the lowest costs – and store it in the safest vaults for just US$4 per month – using world No.1, BullionVault...