END_OF_DOCUMENT_TOKEN_TO_BE_REPLACED

Already stuck in a two-decade bear market, Gold Prices fell afresh on the news...losing 2% for the day and dropping one-eighth to new 20-year lows by the time the Treasury's auctions actually started that autumn.

To mark the anniversary – and mark it almost alone – the Financial Times now says that "Europe's central banks are $40bn poorer than they might have been after they followed the British move."

But no, not quite. Because the gold that they sold – a total of 3,811 tonnes by all accounts – could only become money on sale. Until then, it was just gold to them, and holding it didn't make Europe's central banks any richer. It would simply mean they had 3,811 extra tonnes of gold in the vault, with the potential to become $40bn only on sale.

Which is a very different thing from holding an extra $40 billion in cash.

"What is the rationale for holding gold, a non-interest bearing asset, given that there is no more official role for gold since the collapse of the gold exchange standard?"

So asked Hervé Hannoun of the Banque de France during the FT's Gold Conference in mid-2000. As you can guess, it was a rhetorical flourish. Because nine months after signing the "Washington Agreement" to cap central-bank gold sales at 400 tonnes per year – a pact sparked by Gordon Brown's indiscreet selling and which in turn sparked a sharp rise as the threat of indiscriminate selling fell back – the Frenchman in fact had answers aplenty. 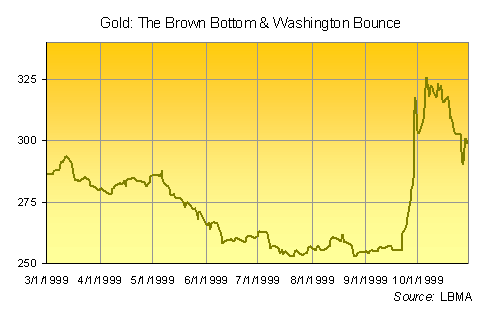 "First, security: the absence of any credit risk is an intrinsic quality of gold. Gold offers full security as long as it is properly stowed in central banks' vaults.

"Second, liquidity: in situations of political turmoil or high global inflation, gold's liquidity is unchallenged...Its liquid quality becomes apparent and increases as uncertainty grows. In this regard, the absence of a return on gold can be viewed as the price of its 'option component': contrary to most other assets, Gold Prices go up when things go wrong."

So far, so yellow and shiny. And during that after-dinner speech – tellingly arranged by investment-bank Goldman Sachs, a key advisor to Gordon Brown's Gold Sales in 1999 – Hannoun would go on to deny the French central bank had any plans whatsoever to sell gold from its vaults.

Why? Because "Gold is an asset of last resort par excellence and recent market developments [i.e. the 'Brown Bottom' in prices and ensuing central-bank agreement to limit sales in future] have in no way altered its intrinsic qualities. There is still a rationale for central banks to hold gold."

Roll on 10 years, however, and those two wonderful attributes of central-bank gold – first security, then liquidity amid crisis – have so far paled compared to Hannoun's third rationale: diversification.

"Gold is also a very good diversification instrument. Indeed in the long run, the price of gold has shown a very low and even a negative correlation with the Dollar (the first-ranking reserve currency) and with US Treasuries. So gold is very useful to build a diversified portfolio as it enables you to improve your risk/return profile."

Odd, but with Gold Prices rising – and rising three-fold and more against both the Dollar and Euro since the start of 2000 – the Banque de France has since sold 520 tonnes of Gold Bullion over the last half-decade, all announced within "Washington II", the renewed (and expanded) central-bank gold agreement signed in Sept. 2004.

France still has another 60 tonnes slated for sale between now and September, when CBGA II will expire. Whether or not the signatory banks all sign up again remains unclear for now. (Renewal in 2004 was completed by March.) But private investors trying to judge their own exposure to gold might want to consider the three rationale laid out by M.Hannoun back in 2000...before the Bank of France saw a fast-buck in selling gold, rather than the advantages of retaining it.