END_OF_DOCUMENT_TOKEN_TO_BE_REPLACED

Gold is soaring as commodities break out of a two-century bear market...

PAPER VALUES remain in an exaggerated state of flux. But gold – boring, yellow and shiny – looks like a rock of sensibility and stability.

But it's not just retaining its value right now. Gold also looks like it could go a lot higher, at least according to an inflation-adjusted chart of the Gold Price. 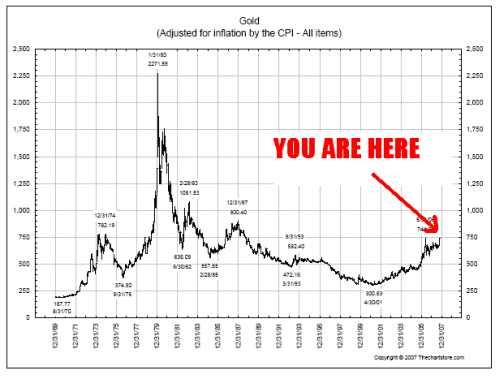 Does this mean the Gold Market is going to $2,271 and beyond? Not necessarily.

Yes, it could happen. But as one listener at the Melbourne Investment Expo pointed out to us, gold isn't a sure thing forever.

"If you bought gold in 1980 and held it, you would have lost money for twenty years, not only in nominal terms but adjusted for inflation, especially if you weren’t earning any interest on your gold.

"It's a dangerous thing. Bear markets can last many years."

The point applies to much more than Gold Bullion Investment, however. Entire asset classes can go into 20-year bear markets. Gold and resources endured one such bear-market, taking 20 years to bottom in 2000 and begin a rally that swept up resource stocks in 2003. It’s been full speed ahead since then.

Our view here at The Daily Reckoning's Australian office, however, is that resources weren't just in a 20-year bear market between 1980 and 2000. They were in fact enduring a 200-year bear market. Here's why.

During the first two industrial revolutions – beginning in Great Britain and then moving to the United States – the supply of commodities grew faster than the populations of the industrialized world.

The urbanization of the globe, along with the Green Revolution in agriculture, have since led to a population explosion...which has created greater demand for commodities than ever before.

And now we have the third industrial revolution, this time in China. It comes on a much greater, much more resource intensive scale.

Meantime, life itself has become more resource intensive. And there are six billion of us all told, all buzzing, teeming, eager, anxious, hungry and ambitious...more than ever before in history.

And yes, we mean property, too. In due course, over-reaching and over-reaction will hit Gold Prices as well. Just not yet to our mind.