END_OF_DOCUMENT_TOKEN_TO_BE_REPLACED

Labor Force Participation tells a different story about gold and US joblessness...
The GOLD PRICE tells us just like any other indicator what is going on in our country, or economy, writes Miguel Perez-Santalla at BullionVault.
The most important part of an economy is simply employment. To ignore or sideline the importance of unemployment statistics is foolish. Including when you are considering the gold price.
The unemployment statistic is one of the most important numbers being studied by the Federal Reserve Bank. Their attempt to influence growth in the economy can only be proven out by growth in employment. This is because a growing economy means the need to produce more and in all cases increase hiring. But all the liquidity that is being added by the Federal Reserve Bank, even though it has plainly worked to boost the gold price over time, has had little effect on unemployment. Because most of the money is not reaching the economy, or the people in the private sector.
Often times we read that the unemployment rate has dropped. But unfortunately it is the Labor Force Participation Rate that has dropped at a greater rate. So the real unemployment rate is higher than what is reported. Because the participation rate is the barometer that shows how many people looking for work have lost faith that they can find full-time employment.
There also seems to be a growth of part-time workforce. This is believed to be caused by the burden that Obamacare will have on small business enterprises. So to avoid the financial burden many smaller firms, instead of hiring full-time employees and paying benefits, prefer to hire part-time employees and avoid participating in the Obamacare scheme.
Also related to Obamacare is the increase in expenses to a family of four which apparently will represent $766 per annum basis current studies. This will represent a loss of spendable income. This will in turn slow production and hurt the growth of the economy. In the end, less spending money means less buying which means less employment.
But that's not all, if you take a look at our indicators you would see that the trend has not reversed. The trend looks dismal at best. People talk about an improving US economy and I hope that they are right. Unfortunately I believe the disparity between the haves and have-nots is growing. Even those that are able to find jobs are accepting positions beneath their education and experience.
What does all this mean to the college graduates who spend anywhere from $50,000-$150,000 for a four-year degree? It means that not only is the college expense not worth the investment but that they are now in a hole that will be difficult to dig out of. If our young and well-educated are not able to find employment at reasonable levels then again we have built a top-heavy pyramid much like our mortgage crisis. Plenty of spending without the future of income to pay the debts will create another crisis.
I know many don't want to hear this, but a college degree should not be for everyone. The education lobby in the United States has had a hold over our government for decades. We need skilled and intelligent laborers at many levels that can earn a reasonable living. Not all people should go into debt to find employment, but sadly this is the vision that our government has accepted as a solution to our woes. 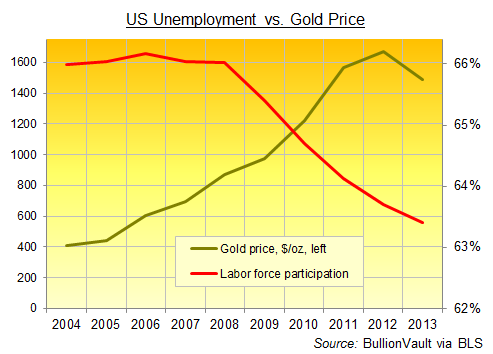 If you look at the graph representing the gold price and the Labor Force Participation Rate you will see that though the rate has continued lower since 2012, gold drifted lower opposed to the norm. That I believe is due to an acceptance or numbing to the current climate, and a false understanding of the unemployment data of late creating a false confidence in the situation.
Then take a look at the graph of the participation rate versus the Gross Domestic Product. You can see that the decrease of the participation rate properly signals the direction of the GDP. 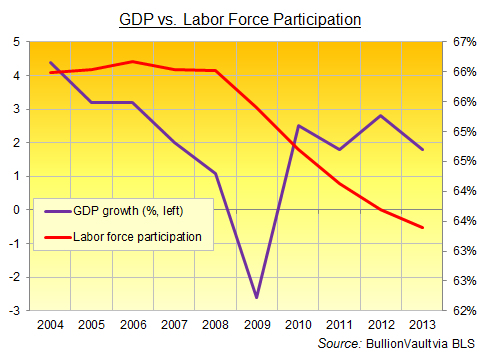 The lack of growth in the Labor Force Participation Rate indicates that the economy is still a long way off from getting on its feet. This means the gold price has upward mobility on the back of the poor economic environment.
Taking into consideration the expected negative factors of Obamacare, the government shutdown and the impending negotiations on the US debt ceiling it behooves the wise investor to consider their position in gold relative to the current market price.