END_OF_DOCUMENT_TOKEN_TO_BE_REPLACED

TODAY there is a spreading awareness that our monetary situation is rather rotten, writes Nathan Lewis of New World Economics in this article first posted at Forbes.

Leaving things up to central bankers, who are obviously making it up as they go along, has not worked out very well. Most recently, these central bankers got very aggressive in response to Covid in 2020; and the "inflation" that has followed has not been very surprising. People generally find monetary affairs to be extremely confusing.

But in the end it really amounts to a choice of two alternatives: The Gold Standard, and the PhD Standard.

Today, we have the PhD Standard. We have a bunch of eggheads with PhDs making stuff up as they go along. But this is not the way we used to do things in the United States.

For nearly two centuries, from 1789 to 1971, we did not have central bankers with unrestrained freedom to not only adjust the knobs and dials as they saw fit, but to invent new knobs and dials – "QE", "QT", "interest on reserve balances", "Reverse Repos" – at what seems to be an accelerating pace.

For a long time, we did not have a central bank at all. 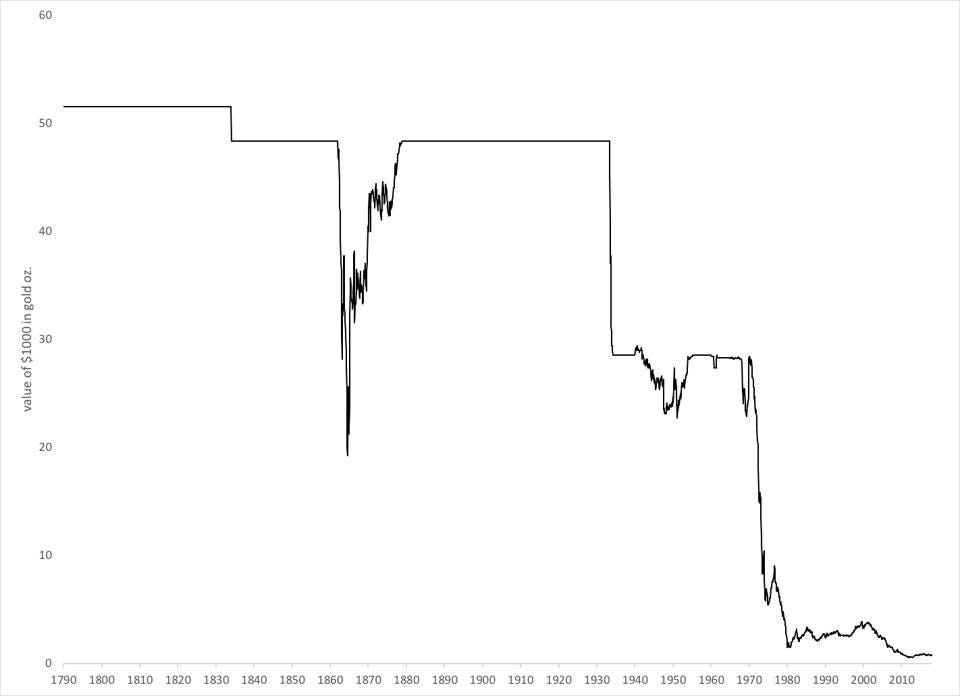 Rather, the United States used a Stable Value system.

The value of the currency was linked to some external benchmark – gold. This was also what all the other major countries used too.

This era was very productive for the United States. It became the wealthiest country in the history of the world, with the most prosperous middle class. The last decade of the gold standard era, the 1960s, is still considered the most prosperous of the past century. There was no big problem that needed to be solved. Everything was working well.

Nevertheless, due to incompetence and ambitions to engage in macroeconomic manipulation, everything changed in 1971. Since then, compared to gold, the Dollar's value has fallen by another factor of fifty. It now takes around $1800 to buy an ounce of gold. During this time, the price of a barrel of oil rose from $3 in the 1960s, to about $20 in the 1990s, to over $100 today. At no time did any central banker say that they were in favor of inflation and declining currency value. They all said the opposite. It just happened anyway – just as it always does.

The Stable Value system is still common today. Actually, more than half of all countries worldwide have a Stable Value policy. They do not have a floating fiat currency, and homegrown central bankers making stuff up as they go along. They tried this in the past, and it created problems, so they abandoned it. Usually, they link their currencies to the USD or EUR. (The International Monetary Fund prohibits countries from tying their currencies to gold.)

Thus, the monetary history of the United States boils down into two great eras: The Gold Standard Era, and the PhD Standard Era, of floating fiat currencies managed by oh-so-very-smart people with PhDs.

I would say that, not only has this been our experience in the US, and also mirrored around the world, but that these are the only two realistic options. There are a lot of fantasies out there. But, along with other "utopian" notions like centrally-planned communism, these don't work in real life. Humans, and their political institutions, are capable of certain things, and not capable of other things.

For example, there is some interest in "rules-based systems." This business of having central bankers just make stuff up as they go along is very unsettling, and often leads to difficulties. These "rules based systems" include: nominal GDP targeting, other monetarist variants, Taylor Rules (in effect, interest rate manipulation), CPI targets, and other such things that assistant professors like to invent whenever they think it will help them advance their careers.

None of these have been tried in the real world. When something like this is tried, it typically blows up in their face, just as the "Monetarist Experiment" that Paul Volcker tried in 1979-1982 had to be quickly abandoned. All of these are floating-fiat systems of macroeconomic manipulation, albeit a somewhat programmatic one instead of today's seat-of-the-pants improvisation.

Forseeably, the currency would have some kind of sickening change in value, and interest rates would go here and there in response. This becomes intolerable, so central bankers have to step in to fix it, and then we are back to improvisation again. This is exactly what happened to Volcker.

We could also ask: Even if there are rules, will the central bank follow the rules? What if there are political pressures for them to do something else, as often happens around elections, or in recessions, or whenever the stock market falls more than 20%? The Federal Reserve has something close to a rule in the form of a concrete CPI target. This has been violated, so now what?

This is the PhD standard that we are familiar with today. What about the Gold Standard?

The gold standard is, of course, a variant of the Stable Value policy that over a hundred countries have today. It is actually a type of binding rule, but one that governments have been able to stick with over a period of centuries. The British Pound didn't change in value vs. gold (or, in earlier days, silver) between 1560 and 1931. Before then, the Greek Drachma held its value for six centuries, the Byzantine Solidus for more than seven centuries, the Arab Dinar for about four centuries, and the Spanish silver Dollar for about four centuries. This is something that humans can do.

Once we accept a Stable Value system, linking our currency's value to some external benchmark, we can then ask: What benchmark should we adopt? Many countries use the USD or EUR as their benchmark, which simplifies all cross-border trade and investment. But, obviously, we can't link the Dollar to the Dollar. We need something else.

Here, once again the creative sorts of people have free reign to invent this, that and the other option. But, in the end, what we want is a currency that is perfectly stable in value. Then, we don't have the difficulties caused by currencies that rise in value (generally known as "deflation") and those caused by currencies that fall in value ("inflation"). But, since in the real world no such perfection exists, then we want something that is the closest possible approximation of this ideal.

About the only alternative to gold that has come up, over the centuries, is some kind of commodity basket. This was actually proposed at least as early as the 1810s in Britain. But, it was dismissed by David Ricardo and others, and Britain went back to gold. It was revived later by Irving Fischer in the late 19th century, and Friedrich Hayek, among others, in the 20th.

Throughout this period, these "commodity basket" ideas have tended to be veiled arguments for currency devaluation during times of recession or declining commodity prices. (Even if the economy as a whole is doing well, declining commodity prices feel like a "recession" to commodity producers, and in the past, a lot of people were farmers.) This was a big part of the currency devaluation arguments of the 1896 Presidential election, for example. Of course they were revived in the Great Depression, and served as a justification for Roosevelt's devaluation in 1933. But when commodity prices soared during World War II, did Roosevelt (he was still President) then declare that the Dollar was too weak? He did not. "Commodity basket" arguments, in real life, tend to be a one-way street.

To this we can add a lot of other difficulties. A commodity basket is a statistical concoction, created by...people with PhDs. Like the CPI, which is adjusted constantly, it could be gamed for political ends.

Gold, on the other hand, always has the same 79 protons. Commodities are not realistically storable. Besides issues with rot and decay, the costs of storage are typically quite high compared to the value of the commodities themselves. Also, there aren't really that many commodities in the world. Food is eaten. Base metals move quickly from the mine gate to industry.

So, as we look around at various Stable Value options, gold is the only viable choice. It has been proven to work over a period of centuries. Britain embraced gold, became the wealthiest country in the world, and ruled the world's largest empire. Britain's American cousins did the same, and got the same results. What problem, exactly, is there to fix? What are the chances that some untested alternative will produce a better result?

There have also been attempts to combine both a Stable Value system and a PhD-Standard system in one. This was, in brief, the core error of the Bretton Woods period, and the reason why it failed in 1971. This is now known to academics as the "currency trilemma." You can't have both. Just one, or the other.

One of these always works. One of them never works.