END_OF_DOCUMENT_TOKEN_TO_BE_REPLACED

So little known today, this 'superstition' applied pretty much everywhere for 5,000 years...
GEORGE SELGIN has been doing some excellent work at the Cato Institute's new Center for Monetary Alternatives, writes Nathan Lewis at New World Economics in this article first published at Forbes.
One of his recent pieces was ' Ten Things That Every Economist Should Know About the Gold Standard'. Along the way he demonstrates, with examples, that hardly any of today's economists have any clue of how monetary affairs were conducted, throughout the world, until just a little while ago.
I thought that I would add some of my own answers to the first three of Selgin's ten topics.
#1. The Gold Standard wasn't an instance of government price fixing
Basically, a "gold standard" system is a type of "fixed value" system. The currency does not float, but rather, maintains a fixed value (exchange rate) with some benchmark. In the process, the government (ideally) gives up all attempts at manipulating the domestic economy via some sort of discretionary "monetary policy".
This is a very common arrangement today, with a currency typically being linked, via a currency board for example, to the Dollar or Euro. These are "Dollar standard" or "Euro standard systems". The Dollar or Euro is the "standard of value". A "gold standard" system is pretty much the same thing, but using gold as the "standard of value" rather than the Dollar or Euro.
Thus, instead of the 655.957 Central African CFA Francs-per-Euro ratio used by the CFA Franc "fixed value" Euro standard currency board system, you have $20.67 Dollars per ounce of gold, used by the United States' "fixed value" gold standard system, during the 1834-1933 period.
#2. A gold standard isn't particularly expensive
A gold standard system doesn't "cost" anything at all. It makes a profit. This profit is known as "seignorage". If one uses the roughly 20% bullion reserve coverage common to gold standard systems in the 19th century, then the seignorage profit is equivalent to the interest income on the 80% of reserve assets typically in the form of debt instruments. This is a lower level than if 100% of reserve assets were interest-bearing debt, as is common today, although the difference between 80% and 100% is really not very important. It is certainly possible to make gold standard systems with 90% or even 100% interest-bearing reserve assets, just as today's currency boards have nearly 100% interest-bearing assets. I explain how to do this in my book Gold: the Monetary Polaris.
Some have focused on the "societal cost" of a gold standard system – namely, the effort of digging gold out of the ground. Yet, gold mining never ceased after the end of the Bretton Woods gold standard arrangement in 1971. Gold mining production today is about double what it was in 1970. About 48% of all the gold ever mined, in all of history, was mined after 1971.
In 1850, about 27% of all the gold in the world was in the form of gold coinage and central bank or government reserves. Today, after over forty years of floating currencies, the percentage is about the same.
#3. Gold supply "shocks" weren't particularly shocking
The supply/demand situation for gold is very different than for an industrial metal like copper. Nearly all the gold ever mined, in human history, exists today in the form of bullion and jewelry. Annual mining production increases this amount by about 2% each year. Very little of annual mining production, under 10%, goes into "industrial" uses of gold such as electronics (and also including dentistry) where gold is potentially "consumed". Even with these industrial uses, quite a bit of that gold is later recovered from scrap recycling.
Thus, the "supply" of gold is fifty times greater than annual production, and also about 500 times larger than "industrial" uses, not even including scrap recycling from industry. If annual production were to somehow double (which is not so easy because it takes years of capital investment and construction to make a large-scale gold mine), then "production" of gold would be about 4% of "supply". And if gold mining were to somehow cease altogether (not likely since gold is produced all over the world), we would still have "inventory" of fifty times annual production.
In the last 165 years since 1850, annual production of gold worldwide has never been greater than 3.5% of existing supply, and never less than about 1.2%. Since 1950, things have calmed down even more, with production never exceeding about 2.2% of supply. (All graphs are from Gold: the Monetary Polaris.) 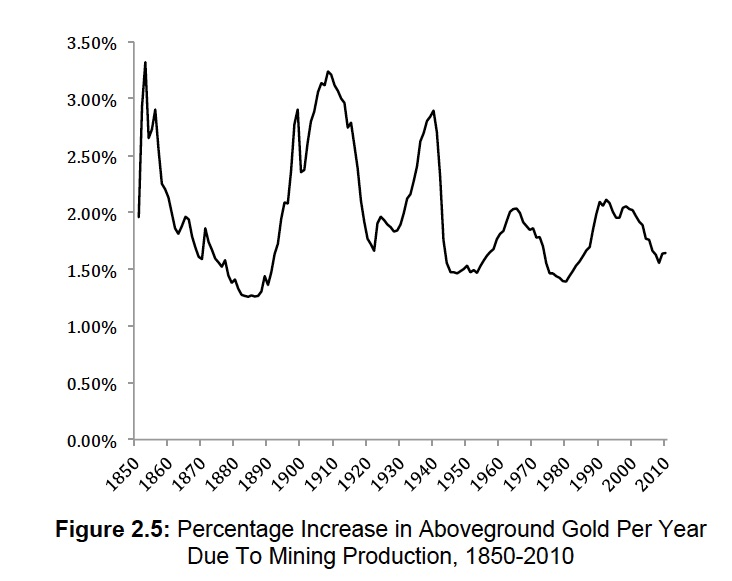 For copper, on the other hand, "supply" and "annual production" are virtually the same thing. Also, virtually all of copper "demand" is for industrial uses such as tubing and wiring. Known inventories of copper amount to about two weeks of industrial demand – compared to 500 years for gold. Obviously, this creates a situation where variance in either mining output or industrial demand, or things like civil unrest in major copper-producing areas, can cause quite a lot of price variability for copper.
These practical factors are some reasons why people have long observed that gold's value is stable, in a manner that is not true of other commodities. As a result, gold has been an excellent benchmark of monetary value, and served well as the "standard of value" for centuries. I might even claim that gold is more stable in value than the Dollar or Euro, which are today serving as a "standard of value" for a great many currencies.
One of the biggest surges in global gold production began around 1850. This was caused by a confluence of new discoveries and also production methods that took advantage of the new industrial techniques of that time. Gold production in the 1831-1840 decade has been estimated at 0.65 million ounces per year. In 1853, production made a momentary peak of an estimated 7.3 million ounces -- about eleven times greater.
But, even this giant increase in production brought annual output only to 3.3% of the estimated 221 million ounces of aboveground gold in the world at that time. So, maybe it wasn't that big a deal. Is there any evidence that it was a big deal?
Let's look at the price of other commodities, as measured in ounces of gold. Commodity prices can be a little confusing, because the United States devalued the Dollar beginning in 1861 to pay for Civil War expenses. Also, a civil war can create some influences on commodity prices (to put it very mildly) that are not monetary in nature. 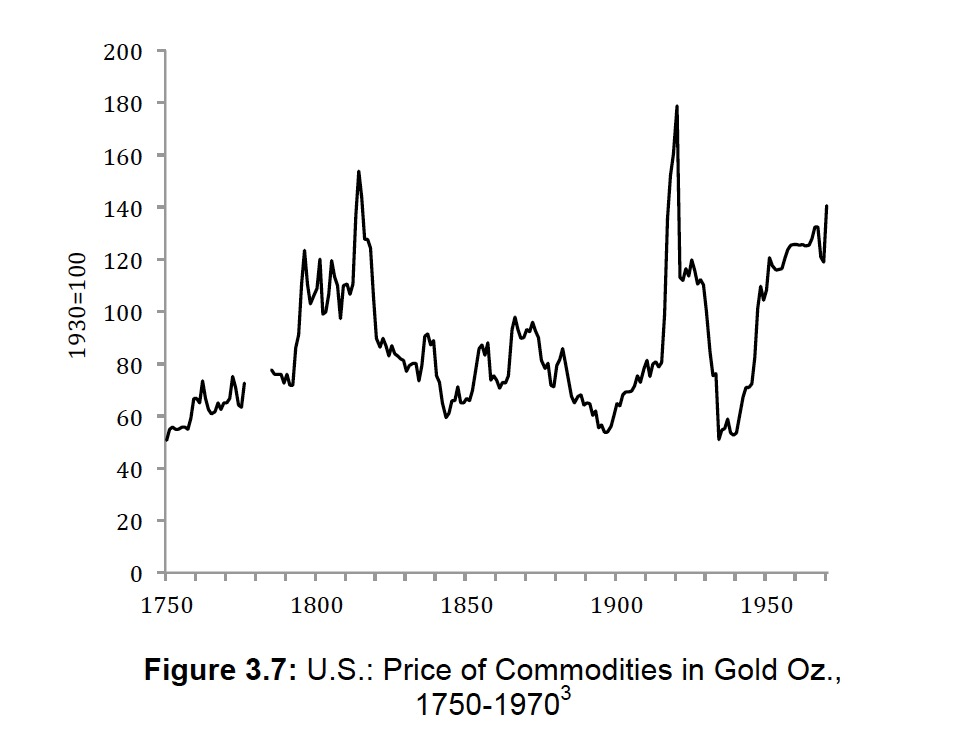 Nevertheless, we find that there is almost no change in US commodity prices from the 1830s to the 1850s, compared to gold. Most of the variability here is related to wars, namely the Napoleonic Wars in Europe in the early 19th century, and World War I.
We find the same thing in Britain. No change. 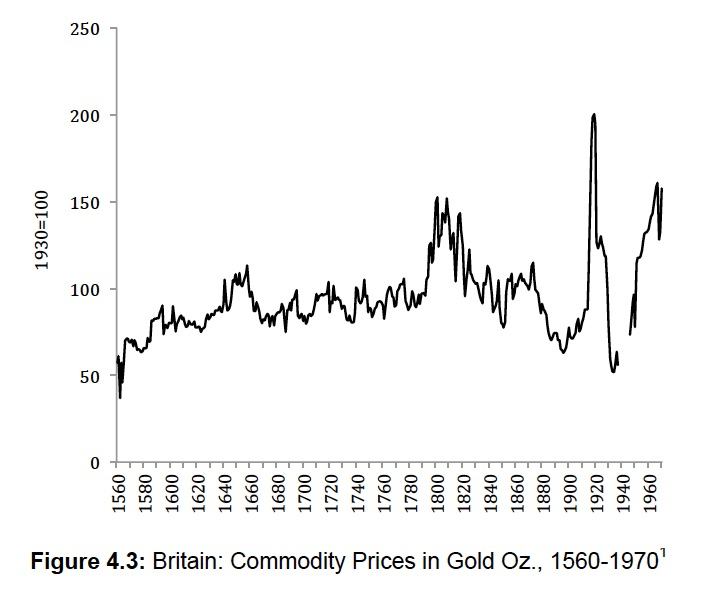 What about the flood of gold and silver that came from the New World during the 16th century? Did that show up in commodity prices? Here is some data from Britain: 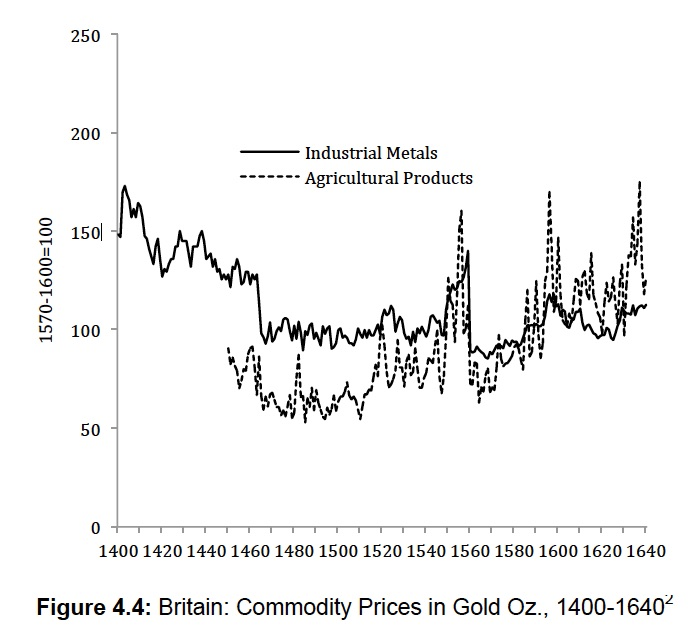 Not a whole lot of variance there either.
People have used gold as money for a very long time – about as long as people have been able to produce gold. Mesopotamians used a gold and silver standard (most historical systems were essentially bimetallic) in 2500 BC. Chinese made gold coins in the 6th century BC. Greeks and Romans used gold as money; so did Persians and Egyptians. Japanese used gold powder as money in the seventh century AD. The Aztecs used gold powder, and small gold figurines, as money.
We are told today that this was due to a "superstition" or an "obsession" – as if Chinese and Romans and Aztecs all had the same "superstition," for five thousand years. So did the Persians, Arabs and Indians. Doesn't that sound a little stupid to you? It does to me. I propose something else: that it worked. It worked so well that, for five thousand years, nobody ever found a better solution.