END_OF_DOCUMENT_TOKEN_TO_BE_REPLACED

No CBGA central-bank gold sales since June, lowest since 1988...
CENTRAL BANK gold sales under the current agreement amongst Western European reserve managers were zero over the last nine months, new data confirmed this week, the longest stretch since at least 1988.
World No.2 holder Germany, which previously sold around 5 tonnes each year to mint commemorative coins from its 3,380-tonne reserves – and which is currently re-patriating all its bullion held in Paris and partly from New York – has not sold any metal since June 2015 according to figures compiled by the World Gold Council.
The Czech National Bank has disposed of 270 kilograms, but is not a signatory and not a member of the single currency Eurozone.
The Banque de France has bought 129 kilos over the last 9 months on the World Gold Council data. 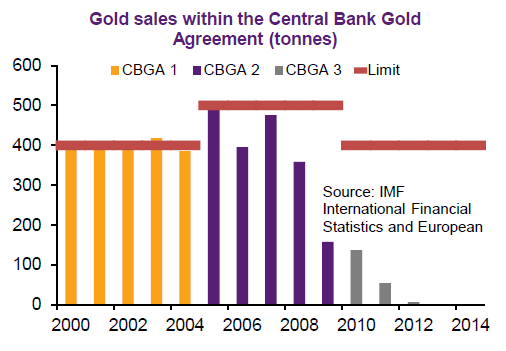 Gold sales by European central banks "accelerated" during the 1990s, notes French investment and bullion bank Natixis, peaking as the metal's price hit multi-decade lows after the UK Treasury said it would sell half its reserves starting in May 1999.
With the first Central Bank Gold Agreement then made amid anger at the UK's mishandling of that announcement, 100% of its 2,000-tonne limit was sold over the 5 years to 2004 by six nations, led by Switzerland, the UK, Netherlands and Portugal.
Signatories to the second agreement then sold 75% of the 2,500 tonnes permitted under CBGA2, but sold barely 10% of the 2,000 tonnes permitted by the third CBGA.
The current Central Bank Gold Agreement set no limit – widely seen as an attempt to avoid embarrassment or speculation over the real need for a fourth deal.
European central banks stopped selling gold "as the financial crisis unravelled in 2008," Natixis goes on. At the same time, "the fear of a US currency debasement kicked in. So central banks with a large share of US assets sought to diversify" – most typically Asian emerging economies which had built strong Dollar reserves after the region's own currency and stockmarket crises of 1997.
Now in 2016 however, those "emerging country central banks that were previously adding gold have reached their target share of gold in total FX reserves," the bullion bank says, while "old world central banks are more interested (and willing) in leasing their gold."
"However," counters the new Gold Focus 2016 yearbook from specialist analysts Metals Focus, "overall outstanding official gold loan and swap positions remained historically low" in 2015.
"Moreover, it is our understanding that lending activity was centred at the shorter end of the curve" suggesting only short-term demand from borrowers such as mining companies wanting some degree of gold-price 'hedging' protection.
"Finally," says Metals Focus, "a number of historically big lenders that provided significant liquidity to fuel the rise in producer hedging in the 1990s remain absent from the market."
With only 3.4 tonnes sold in Year 1 of the current agreement, made in September 2014, the 20 national signatories together with the European Central Bank were last flat or annual buyers in 1988 as a group on BullionVault's analysis of publicly available figures.
Both Natixis and analysts Thomson Reuters GFMS, note that the strongest central-bank demand for gold continues to come from major mining producer nations, led by China (world No.1) and Russia (world No.3 miner).