END_OF_DOCUMENT_TOKEN_TO_BE_REPLACED

GOLD PRICES hit new 9-month highs against the Dollar in Asian trade Monday, defying further outflows from the big US gold ETF investment funds as Comex speculation rose amid a slew of newspaper headlines proclaiming heavy central-bank demand for physical bullion from Russia and China ahead of this week's Lunar New Year holidays.
China's stock markets also rose again but European bourses were mixed as longer-term interest rates ticked higher in the bond market, and the gold price edged back in London and early New York hours as the Dollar rallied from new 9-month lows on the currency market.
Following last week's softer US inflation data, betting that the Federal Reserve will raise its key interest rate by only 0.25 points when it next meets in 2 weeks time held above 9-in-10 according to the CME derivatives exchange's FedWatch tool.
With the Dollar gold price rising towards this morning's peak at $1928 per ounce, the giant SPDR Gold Trust (NYSEArca: GLD) last week shrank by 0.3%, needing 3.2 fewer tonnes of bullion to back its shares and making the 2nd consecutive weekly outflow at its smallest size since mid-December.
The smaller iShares gold ETF (NYSEArca: IAU) expanded only 0.1% to need 0.6 additional tonnes.
Comex gold futures and options, in contrast, saw an extra 30 tonnes of net speculative length added by the Managed Money category according to data from US regulators the CFTC for the the week ending last Tuesday.
Since then, the total number of all Comex gold futures contracts has risen by 3.7% as the Dollar gold price rose 2.7% to this morning's peak, with open interest in more speculative, more leveraged options contracts jumping by 8.5%. 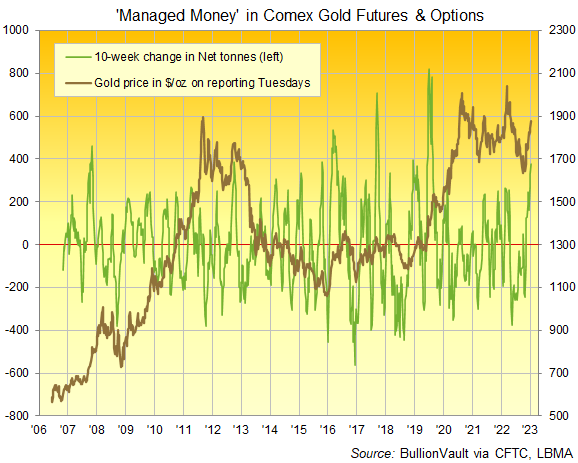 Including players such as hedge funds and 'CTA' speculators, the Managed Money's bullish betting on gold prices has leapt since the metal hit 2.5-year price lows back in October, with the Managed Money's net long position rising at the fastest 10-week pace since the record betting surge of August 2019 and beaten by only 7 such periods since the CFTC started to collate these figures in 2006.
"The central banks of China and Russia are among those making huge purchases of gold amid geopolitical tensions," says a column published by Hong Kong's English-language South China Morning Post today.
"The two countries are almost certainly ‘weaponising’ the precious metal, which will only push up its price."
"Some thought Bitcoin might be a rival, a digital gold even," says a separate column from Bloomberg, republished by The Washington Post and also citing an estimate of record central-bank gold demand first released by the mining industry's World Gold Council last October and covered by a column in the Financial Times last week.
"The market has now 'kneecapped' that idea [and] if you want gold you will need to buy, well, gold. The question is...have you enough?"
So-called crypto currency Bitcoin today snapped its 2-week rally, holding below $21,000 for a loss of more than 57% from this time last year.
Crude oil meantime slipped a few cents from 2-week highs above $85 per barrel of Brent and $79 per barrel of US benchmark WTI, but while US natural gas prices popped more than 7% higher, European prices sank, knocking more than 13% off TTF contracts for delivery next month, down to the cheapest since December 2021 as the region was forecast yet more above-average temperatures for late-Janaury.
Silver prices briefly dipped below $24 per ounce, a level now tested 14 times since mid-December after the more industrially-useful precious metal rose more than 37% from its own 2-year lows.
Gold prices for non-Dollar investors hit 7-month highs for Euro investors above €1775 per ounce and rose within £8 of the all-time UK Pound record at £1580.
Shanghai premiums above London quotes meanwhile closed the day lower, suggesting a softening of import demand for gold bullion ahead of the Lunar New Year holidays starting this week.