END_OF_DOCUMENT_TOKEN_TO_BE_REPLACED

GOLD PRICES split again on Thursday for US versus other investors, holding firm in Dollar terms above $1800 per ounce but spiking down to 3-week lows in Euros and Sterling as the European Central Bank repeated its 'easy money' stance but the Bank of England tightened UK monetary policy for the 2nd month running.
The gold price in Pounds per ounce sank to £1321 on Bank Rate rising to 0.25% per annum, with minutes from the MPC's meeting showing that 4 out of 9 policymakers split today from Governor Andrew Bailey and voted for a steeper hike to 0.50%.
UK inflation in consumer prices will top 7.2% in April, the Bank of England also forecast, up from the 3-decade high of 5.4% already recorded last month.
"Energy prices continue to be the main reason for the elevated rate of inflation," said ECB President Christine Lagarde meanwhile, holding the 19-nation Eurozone's key interest rate at minus 0.50% and making no change to Frankfurt's continued QE bond-buying plans.
With Eurozone inflation rising to a currency-union record of 5.1% per year this New Year, "Market-based indicators suggest a moderation in energy price dynamics in the course of 2022," Lagarde says, "and price pressures stemming from global supply bottlenecks should also subside."
Despite the lack of ECB action, the Euro rose and the Dollar sank on the FX markets, pulling the gold price for German, French, Italian and other single-currency investors down to €1582 per ounce. 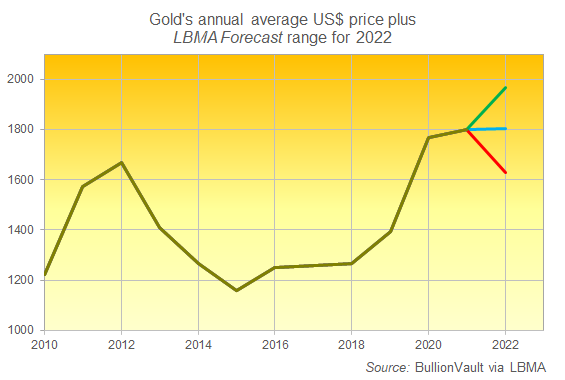 "Gold is now caught between the anticipated pace of the Fed hiking cycle and inflation expectations," says Suki Cooper, head of precious metals research at London bullion market-maker Standard Chartered, in the new 2022 Forecast Survey published by industry body the London Bullion Market Association.
Giving an annual price forecast within 2% of the survey's average prediction for the 4th time in 5 years, "[While] the gold market has already priced in a number of headwinds, such as scope for US Dollar strength," Cooper says, "[it] still needs to contend with the strength of other asset classes amid a rate-hiking cycle and the greater opportunity cost of holding gold."
On average, the 28 analysts entering forecasts for this year's gold price see the metal averaging $1801 per ounce, virtually unchanged from last year's new record high of $1798.
Coming closest to that average forecast with her outlook for $1800 per ounce, "Gold is down but not out," says Swiss refining and finance group MKS Pamp's Nicky Shiels, "with an innate ability to rally when the consensus is bearish.
"[But] we acknowledge that if $1675 is broken, all hope of pricing in inflation will be gone and a new bear market will be enacted, where gold will lose appeal as a monetary asset and inflation hedge."
"At the end of the day," counters the most bullish forecaster at $1965, Thorsten Polleit of German gold dealers Degussa, "central banks will prioritise the goal of 'keeping the economies going' over 'bringing inflation down'...keeping inflation-adjusted interest rates well in negative territory."
Polleit's forecast also led the 2021 survey – his first entry to the LBMA competition – with a prediction of $2300.
Leading the 2022 bears at $1630, Bernard Dahdah at French bank Natixis sees "the opportunity cost of holding gold rising when yields rise [making] large outflows from physically backed ETPs the biggest risk."
The winning forecaster in 2015, when gold prices hit their bear-market low of $1160, Dahdah then forecast another 14% drop in 2016, but the metal instead rallied almost 8%, beginning what has been a 6-year rise to date.