END_OF_DOCUMENT_TOKEN_TO_BE_REPLACED

GOLD PRICES rallied on Tuesday in London, halving Friday's $20 plunge against a fast-weakening US Dollar as world stock markets struggled below last week's near-record highs and the British Pound jumped ahead of the UK General Election.
Dollar gold prices touched $1467 per ounce as the US currency fell versus the Euro after a stronger-than-expected Eurozone investor sentiment survey.
With the US and China apparently " working to delay" the imposition of new trade tariffs on each other's imports scheduled for Sunday, "The deadline of December 15 is certainly top of everyone's mind," Reuters quotes Canadian brokerage TD Securities' commodity strategist Daniel Ghali, "helping gold stay firm."
Gold priced outside the Dollar was less solid, however, struggling to regain late November levels in most currencies and rallying only £5 per ounce for UK investors from yesterday's new 5-month lows.
The Pound today touched its highest level on the FX market since March vs. the Dollar and since February 2017 against the Euro.
That helped cap the UK gold price in Pounds per ounce at £1113, down by more than one-eighth from its peak after likely election winner and pro-Brexit campaigner Boris Johnson took over from Theresa May as Prime Minister this summer. 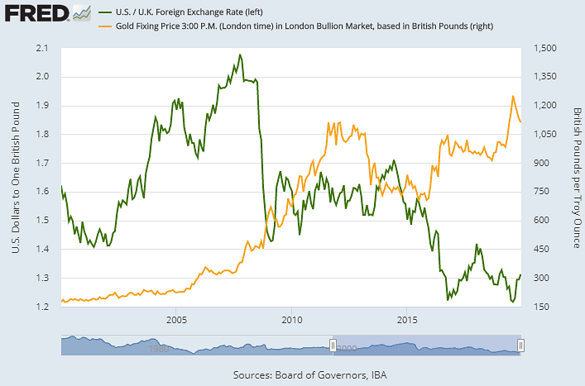 "De-dollarization" by emerging-market central banks will help drive gold prices higher in 2020 reckons US investment bank and London bullion market-maker Goldman Sachs' Jeff Currie, also pointing to "late-cycle concerns" over the global economy plus "heightened political uncertainty" as boosting investment demand.
"Demand from central banks for gold is biggest since the Nixon era," he told Bloomberg Monday, "eating up 20% of global supply. I am going to like gold better than bonds because the bonds won't reflect that de-dollarization."
European government bond prices slipped Tuesday, but US debt edged higher, pushing 10-year yields down to 1.81% – a 33-month low when reached in August.
New data from world No.3 economy Japan meantime orders for machine-tools sank 37.9% from 12 months before in October, the fastest annual drop since the global economic slump of 2009, falling to their lowest Yen value since New Year 2013.
The UK's economic growth has also hit a 2009 low, the Office for National Statistics said today, with GDP showing 0.0% change in the 3 months to October, supported by the services sector as construction and industry both shrank.
Johnson's Conservative Party vows to "get Brexit done" at the end of next month if re-elected on Thursday.
New data from China meantime said consumer-price inflation in the world's No.2 economy hit an 8-year high of 4.5% in November thanks to soaring costs for pork as Asian swine fever continues to hit the region's livestock.
"The implication for gold is negative," says analyst Rhona O'Connell at brokerage INTL FCStone, because the higher cost of living will crimp discretionary spending.
Against that, top-end luxury goods sales are holding firm and China's consumer confidence index "is actually relatively robust" she adds, holding less than 1.5% below this year's new all-time highs on the National Bureau of Statistics' index.
With Chinese New Year set to bring peak household demand in late-January, "Jewelry wholesalers are looking to clear inventory," O'Connell adds, "so there is a degree of discounting that is helping [current gold] demand to some extent."