END_OF_DOCUMENT_TOKEN_TO_BE_REPLACED

GOLD PRICES twice tested 1-week lows at $1925 per ounce in Asian and London trade Thursday, bottoming $90 below Tuesday's 1-week high as world stock markets also fell amid what analysts called "disappointment" with the US Federal Reserve's cautious tone on increasing monetary stimulus to fight the Covid pandemic's economic slump.
Defying market chatter about buying potentially unlimited quantities of Treasury bonds to keep the interest rate they offer near zero, yield curve control is not "warranted in the current environment" said minutes from the Fed's late-July meeting.
With the tech-stock Nasdaq index losing 0.5% on yesterday's news, global stock markets today lost 1.5% by the start of New York trading.
"It seems the market is quite displeased with the discussion about yield curve control specifically," Reuters quotes economist Tom Simons at US investment bank Jefferies.
Long-term interest rates still eased lower however on Thursday as government bond prices rose, cutting US Treasury yields to 0.26% per annum on 5-year debt and 0.64% on 10-year bonds.
But inflation expectations slipped faster, with 5- and 10-year US breakeven rates dropping to their lowest in over a week, down 3 basis points each from Tuesday's 7-month highs of 1.55% and 1.68% respectively. 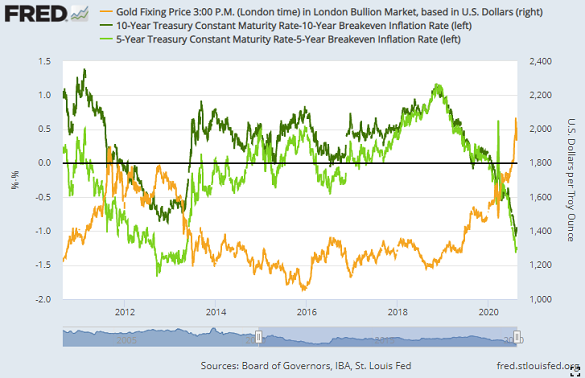 The link between gold prices and inflation-adjusted US yields has rarely been stronger, with the 5-week correlation between 10-year real rates and gold now reaching -0.99, the most strongly negative relationship since the perfect inverse correlation of -1.00 seen a half-decade ago, when gold prices neared the bottom of a 4-year bear market.
Down from 7 August's new record gold price of $2075, today's low at $1925 per ounce is only just above the metal's prior all-time peak of September 2011.
"The gold price has cooled down a bit and client activity is on the lighter side," says one London bullion desk today
"[But while] another leg down is possible in the short-term, it would probably get bought by bargain hunters looking to make quick profits or new comers looking to save their purchasing power.
"The 'small' pullback towards $1870 in the middle of the month was quick to be filled, and I am of the view that another lighter pullback can happen before the gold price trades higher in September through November at least."
Major gold-backed ETFs were left virtually unchanged in size yesterday, with the SPDR Gold Trust (NYSEArca: GLD) needing 1,252 tonnes of backing – the most in 7 years – as cheaper competitor the iShares IAU needed a lifetime record above 502 tonnes to back its shares in issue.
On the geopolitical front meantime, "China is reluctant to hit back at US firms over Washington's new Huawei 'death sentence'," says the South China Morning Post, reporting that – while the US Commerce Department's new regulations of Monday could stop the Chinese tech-giant buying any US-made equipment – "Beijing still needs US technology and is keen to keep American businesses onside to help revive its economy."