END_OF_DOCUMENT_TOKEN_TO_BE_REPLACED

GOLD PRICES held flat in US Dollars and Sterling but dipped towards 10-week lows in Euro terms on Thursday after the European Central Bank confirmed its plan to raise Eurozone interest rates after 8 years below zero and to stop creating new QE money to buy government bonds from next month.
Bond prices fell sharply in response, pushing Italy's 10-year borrowing cost up towards the highest since early 2014, while global stock markets fell once again.
With the US Fed and UK's Bank of England already raising their interest rates in spring 2022, the ECB on Thursday vowed to "maintain optionality, data-dependence, gradualism and flexibility...throughout [the] process" of  "normalising its monetary policy".
For today however, the 19-nation central bank held deposit rates at negative 0.5% having grown its balancesheet by 15% from this time last year to nearly €9 trillion in the face of inflation hitting multi-decade records above 8%.
"In a world of steady interest-rate rises and balance-sheet reduction by central banks," said Neil Meader of specialist analysts Metals Focus on Wednesday, launching the consultancy's new Gold Focus 2022 report, "it's very difficult to see how gold soars ahead, especially if inflation comes off the boil."
Against that however, and lending strong support to gold prices, "Institutional investors are in no rush to sell," Meader said, pointing to the Ukraine war, other geopolitical strife, economic uncertainty, strong inflation and doubts about the outlook for global equity markets as reasons to maintain a position in the precious metal.
Giant gold-backed ETF the SPDR Gold Trust (NYSEArca: GLD) grew by 0.2% on Wednesday, the first inflow since 25 May.
World No.2 gold ETF the iShares product (NYSEArca: IAU) was unchanged yet again at its smallest in 2 months. 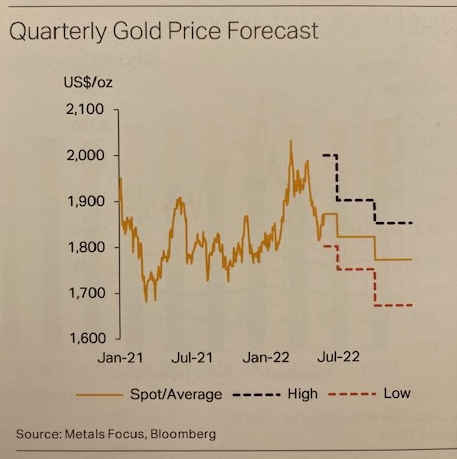 Price-wise, and based on Metals Focus' end-2022 forecast, "You could write your own headline" from a choice of three, Meader went on.
"Annual average gold prices are predicted to rise 2% to a new all-time nominal high in Dollar terms. Or gold will retreat to $1670. Or the gold price will decline 9% intra-year, but still outperform other assets."
Global stock markets fell again Thursday, dropping for the 4th session in 7 so far in June, with the MSCI World Index losing 7.8% from this time last year.
Dollar gold at $1851 per ounce has lost 2.2% over that period, while global bond markets have dropped 14.6% on Bloomberg's aggregate total-returns index.
So-called cryptocurrency Bitcoin has dropped 19.6%, while silver prices – failing again Thursday to hold above $22 per ounce – have lost 20.7% but energy costs have soared, with crude oil up more than 70% and natural gas rising over 150% in the US and 200% in Europe.
Sending the Euro higher and pushing gold prices down to €1720 per ounce, the ECB left policy rates unchanged yet again on Thursday, but said it will end new QE bond purchases on 1 July and then raise its deposit rate from minus 0.50% to minus 0.25% at its July policy meeting 3 weeks later.
"The Governing Council [then] expects to raise the key ECB interest rates again in September [but] the calibration of this rate increase will depend on the updated medium-term inflation outlook" - currently forecast to slump from 6.8% in 2022 to 3.5% in 2023 and 2.1% in 2024.
China gold prices earlier rose to a 4-session high of ¥398 per gram on the Shanghai Gold Exchange as the Yuan slipped against the Dollar on the currency market.
Together, that saw the premium for bullion landed in China – gold's No.1 consumer market – edge back to barely $1 per ounce versus London quotes, falling almost 2/3rds from yesterday and contrasting with a typical incentive for new imports of $8 per ounce.
UK Gilt yields meantime rose to fresh 7-year highs above 2.30% per annum on 10-year debt – higher than any comparable major economy besides the USA, now at 3.07% – despite international institution the OECD forecasting that UK economic growth in real terms will fall to zero in 2023, the weakest among its peers.
The UK gold price in Pounds per ounce slipped and then rallied Thursday back towards unchanged for the week so far around £1476.