END_OF_DOCUMENT_TOKEN_TO_BE_REPLACED

The GOLD PRICE rose against a weakening US Dollar on Monday, extending its strong start to 2023 and the resilience of 2022 with bullish signals according to several analysts as China's central bank said it had added gold to its reserves for a second month in a row, writes Atsuko Whitehouse at BullionVault.
Slipping from Friday's multi-month weekend highs in Euro and UK Pound terms, spot gold priced in the US Dollar jumped 0.8% to $1880 per ounce early Monday morning, the highest since early May, before easing back as longer-term borrowing costs on US Treasury bonds rose while US Dollar index steadied near a 7-month low.
The Dollar price of gold bullion rose 2.3% across the first week of 2023 after closing 2022 up 1.4%, despite the US currency soaring 7.9% last year and the 10-year bond yield shooting up from 1.5% per annum to 3.9% – the steepest annual increase on records stretching to the 1960s.
"If this alone isn't the most bullish signal for 2023, I don't know what is," says Nicky Shiels, head of metals strategy at Swiss bullion refining and finance group MKS Pamp, pointing to gold's 2022 resilience against the most aggressive monetary tightening from the US Federal Reserve in 4 decades. 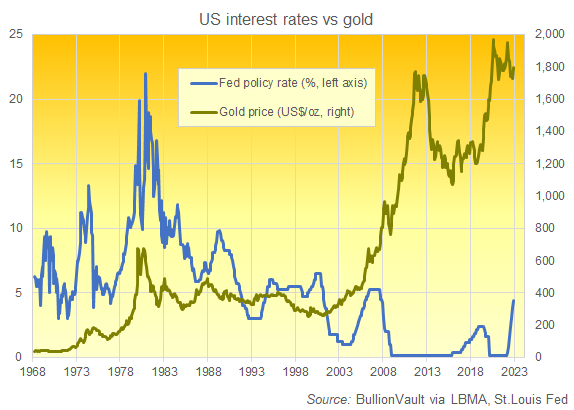 The Federal Reserve last month raised its benchmark interest rate to a ceiling of 4.50%, up from zero at the start of 2022 with a string of four straight three-quarter point hikes, the most aggressive policy moves since the early 1980s.
"In general, we are looking for a price friendly 2023 for investment metals," says derivatives platform Saxo Bank's commodity strategist Ole Hansen, pointing to the likely global economic recession and stock market valuation risks, an eventual peak in central bank rates, plus the prospect of a weaker Dollar and inflation settling around 4% per year rather than the 2.5% level more widely expected.
Adding to this support, Saxo Bank also sees a floor in the gold price from continued strong demand from central banks.
The People's Bank of China raised its gold holdings by 30 tonnes in December, according to data on its website published Saturday, repeating November's addition – the first reported inflow since September 2019 – and taking the world's No.1 gold consumer nation's state holdings to a total of 2,010 tonnes, the 6th largest national holdings in the world.
Central banks as a group bought a net 673 tonnes between the first quarter and the third quarter of 2022 according to estimates published by the mining industry's World Gold Council, surpassing all annual totals since 1967.
Looking at private Chinese demand, "There is certainly the possibility of fresh buying ahead of the [Lunar] New Year [holidays around 22nd January], but people are still very nervous of the Covid outlook," says bullion analyst Rhona O'Connell at brokerage Stone X Group Inc.
Despite the World Health Organisation saying that China's Covid data undercount both hospitalisations and deaths, Beijing on Sunday eased China's international border restrictions, further dismantling its strict 'zero Covid' regime after historic public protests and unrest by removing the need for travellers arriving from Hong Kong or abroad to quarantine.
Gold prices on the Shanghai Gold Exchange today extended their premium to London quotes, offering importers an incentive of $19.60 per ounce on Monday even as the Yuan price rose to its highest since March while the Yuan strengthened against the Dollar to the highest since mid-August – a currency trend which may also encourage fresh gold buying by Chinese investors and households, adds O'Connell at StoneX.
With Asian and European stock markets also rising at the start of the new trading week, Dollar  prices for silver – which finds nearly 60% of its annual demand from industrial uses – rose 0.5% to $23.96 per ounce.
Platinum, which finds two-thirds of its demand from industrial uses, edged higher 0.3% to $1097 per ounce, while the price of palladium – which finds well over 4/5ths of its end-use demand from auto-catalysts to cut carbon emissions from gasoline engines – rose 1.1% to a 4-week high of $1823 per ounce before sinking $50 and continuing to lag the rest of the major precious metals.