END_OF_DOCUMENT_TOKEN_TO_BE_REPLACED

GOLD is no longer a safe haven. Gold isn't an effective hedge against inflation. Gold is dead, reports Frank Holmes at US Global Investors.

You may have heard and read these comments, and others like it, numerous times over the course of the recent "everything selloff".

This is staggeringly shortsighted to me. Gold is down only around 9.5% for the year, despite surging bond yields, and despite the US Dollar being at its strongest level ever relative to other major currencies.

Given these incredible headwinds, you would expect gold to have lost far more of its value than it has. But compared to other assets, from stocks to bonds to digital currencies, the yellow metal has been remarkably resilient.

And that's gold priced in the US Dollar. When we price it in other world currencies, gold has done even better since many currencies have declined significantly in value relative to the greenback. Last month the British Pound Sterling fell to an all-time low against the Dollar, as did China's offshore Renminbi.

Of the various gold prices shown below, only two – those priced in the Dollar and Brazilian Real –were negative for the year as of September 27. The others, including gold priced in the Canadian  Dollar, were positive. 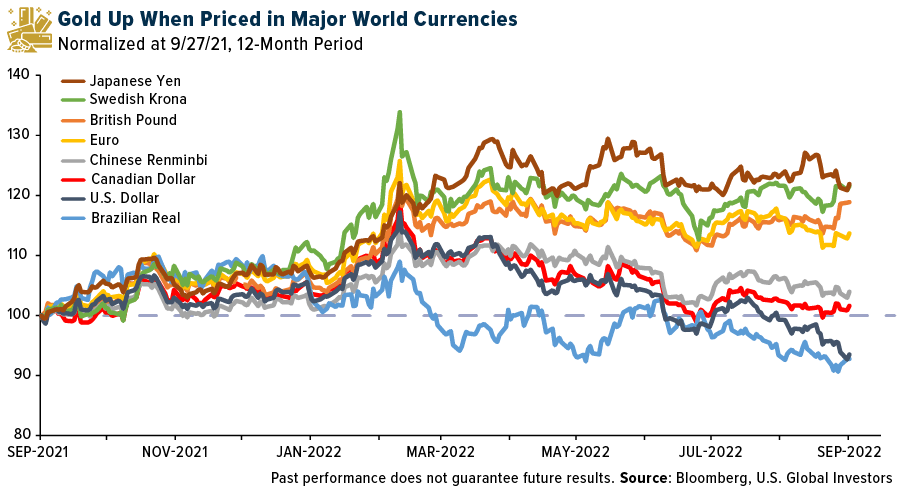 Perhaps 2022's best gold performance has occurred in Turkey, where the Lira has fallen some 52% on jaw-dropping annual inflation of 80%.

Gold has doubled in price since the start of the year, helping foresighted investors protect their wealth against runaway consumer prices. Turks have traditionally invested in the precious metal, and many still prefer it as a store of value, according to a May survey by Areda Survey.

Nearly 43% of those surveyed said they consider gold to be the best form of investment.

There are a number of signs that the global economy could be headed for a recession (or that we're already in one), the most recent of which is that US home prices are in freefall.

Last week, the Case-Shiller 20-City Index posted its first month-over-month decline in 10 years. Although released this week, the data records prices as of the end of July, meaning home prices may have slipped even further since then. 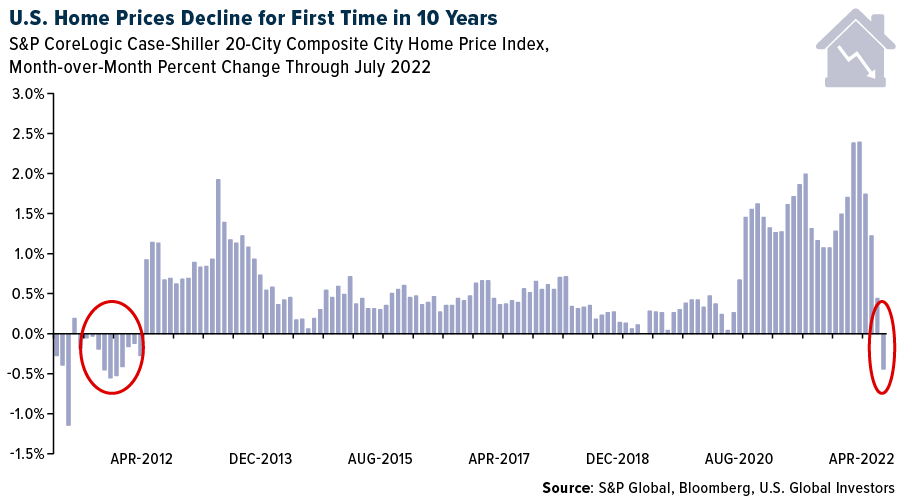 To be clear, I don't believe this depreciation will be as severe as it was during the 2007-2008 housing crisis. Banks are not nearly as speculative as they were then, meaning they're generally not lending to borrowers with poor credit quality. The delinquency rate on single-family mortgages is currently below 2%, which we haven't seen since 2006, just before the crisis.

Nevertheless, rates are ticking up, which could prompt unemployment to spike. Many American homeowners could therefore end up defaulting on their home loans.

If it all comes crashing down, I would want to have some gold in my portfolio, which has historically been an attractive store of value when markets cratered.

As always, I recommend a 10% weighting in gold, with 5% in physical bullion and 5% in gold mining stocks, mutual funds and ETFs. Remember to rebalance on a regular basis.