END_OF_DOCUMENT_TOKEN_TO_BE_REPLACED

LET'S face it, we live in a world of radical uncertainty, writes Arkadiusz Sieron at Sunshine Profits.

There are not only many known unknowns in the world, but the same can't be said of unknown unknowns. We simply do not known what we don't know.

In other words, the problem is not risk. The notion of risk implies that we can compute probability. This is what the mainstream economists assume: we know the odds, so there is a single optimizing solution to each problem. But the real issue is that we do not know the probabilities, because we even do not know how the world works.

probability applies in a casino but not in the real world. There's a substantial difference between playing roulette or forecasting the weather, the scope of new inventions, or the prospect of war, elections or the asset prices. As Keynes wrote (at least once we agree with him), "About these matters there is no scientific basis on which to form any calculable probability whatever. We simply do not know."

So how do we cope with the unknown? Mervyn King, former governor of the Bank of England, provides an answer in his interesting book The End of Alchemy. According to him, a coping strategy comprises three elements – a categorizationof problems, a set of rules of thumb, or heuristics, to cope with the latter class of problems; and a narrative. The latter is key – so we focus on it.

What is narrative? King defines it as "a story that integrates the most important pieces of information in order to provide a basis for choosing the heuristic and the motive for a decision." When we cannot write down a mathematical model with known probabilities, we can nevertheless follow some narratives.

Narratives are of great importance in the financial markets. As King points out, "under radical uncertainty, market prices are determined not by objective fundamentals but by narratives about fundamentals." That's a strong statement! However, we are not convinced whether it is really the case in the long run, but it sounds cogently as a description of the short or medium term.

If stories about fundamentals, or stories that market consensus at any one moment judges true, are the powerful driver of asset prices, they are even more forceful in the gold market. Why? The fundamental value of equities are unknowable (as we do not know what will be the cash flows generated by a given company in 50 years), but we can at least estimate that somewhat. But what is the fundamental value of gold – an asset which does not generate any yield? It's truly unknown.

It does not mean that there are no fundamental factors in the precious metals – there are, and we provided many times evidence for the importance of the US Dollar or the real interest rates. But they affect the gold market through the narratives, or market sentiment (this is also why our trading alerts are so relevant). The chart below presents the history of the gold market shaped by four such powerful narratives. 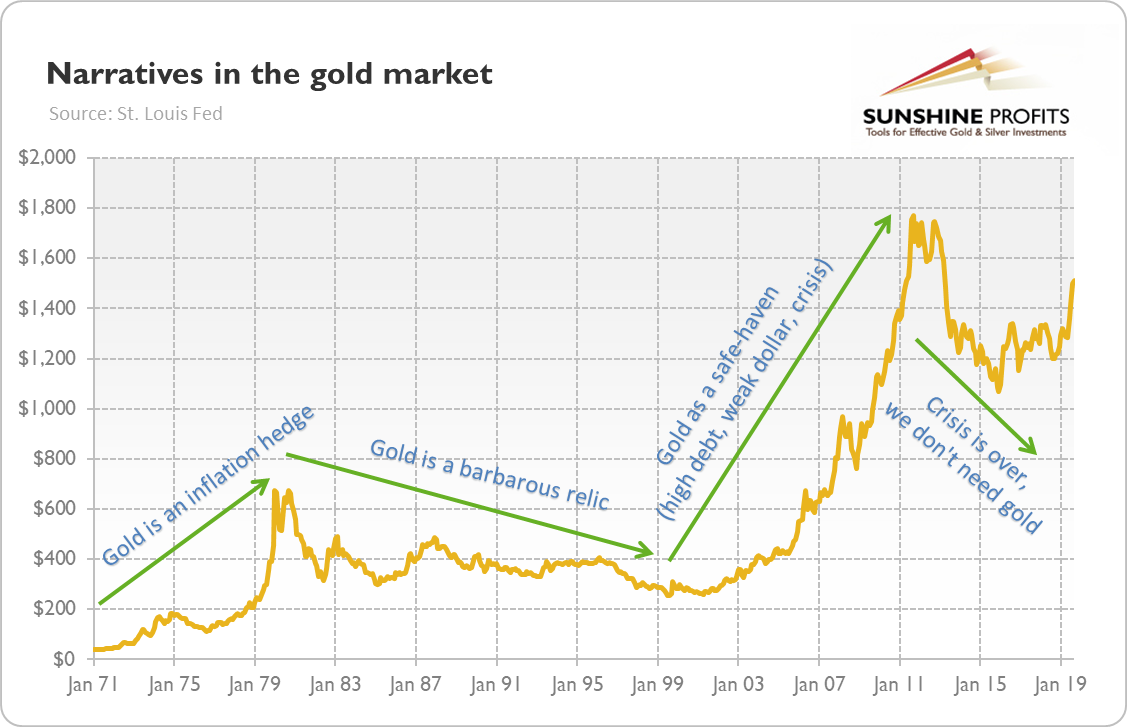 Have you ever wondered why gold – although it is generally negatively correlated with the greenback and real rates – sometimes moves in tandem with the Dollar and yields? Or, why some rounds of quantitative easing were positive, while other were harmful for the gold prices? The answer lies in narratives.

When the US Dollar strengthens because of the increased demand for safe havens, as it seems to be the case today, it fits the narrative of elevated uncertainty, which is positive for the yellow metal. The first two rounds of QE were positive for the yellow metal, because the dominant narrative was that the economy was in the toilet and at best, QE would not change it, or at worst, it would generate high inflation. But during the third dose of QE the narrative changed, people stopped worrying about inflation and started believing in the economic recovery and that the Fed regained control over the economy. Hence, gold prices started to decline.

Now, it seems that the narrative about the economy, the central banking and gold is changing again. The economy is slowing down and people worry about recession. The global bond market is awash in negative yields. The Fed abandoned its tightening cycle. The price of gold jumped above $1400 and it is flirting with $1500. In such an environment, there are substantial odds that narratives will change in favor of gold, especially if investors start to worry about the sustainability of high public debt and the true strength of the US Dollar.

If that happens, gold could start a new bull market for good.