END_OF_DOCUMENT_TOKEN_TO_BE_REPLACED

Consumer confidence at record lows as Misery Index shouts 'stagflation'...
WHY so miserable? asks Adrian Ash at BullionVault.
Unemployment is down to multi-year lows if not half-century record lows across the rich Western nations.
World stock markets meantime came into 2022 at record highs...
...and the same 'wealth effect' should be clearer still for home-owners. Because house prices have never been higher.
Nor have wages on average, not even when you adjust for inflation. Not outside the data-confusion of the Covid Crisis.
Yet apparently we've never had it so bad. Consumer confidence has sunk across the rich world, plunging to the "worst ever!" on index readings everywhere from New Zealand to Europe to the USA.
Again, why so much misery? 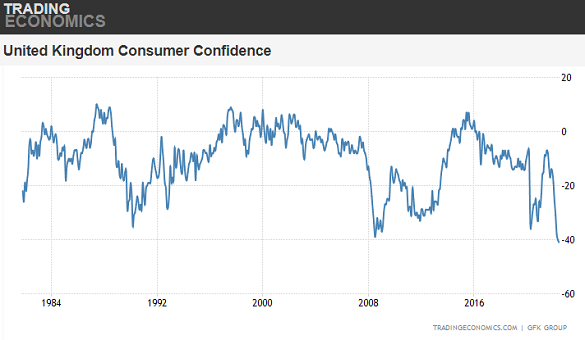 Here in the UK, this plunge in consumer confidence really is something.
Gfk's UK consumer confidence survey runs back to 1974. So it's hard not to wonder how last week's reading, putting the research group's index at minus 41, can really be worse than the first or second oil crisis of the 1970s...
...or the winter of discontent in 1978...
...or the early 1980s recession.
More urgently, "The consumer mood is currently darker than in the early stages of the Covid pandemic, the result of the 2016 Brexit referendum, and even the shock of the 2008 global financial crisis," says Joe Staton, a strategy director at GfK.
An error in the survey perhaps? A change in the questions? The clown in Downing Street or the clown wanting his job from across the aisle? The slaughter not so far away in Europe?
Maybe. But consumer surveys say the same across the rich world, from New Zealand to the USA.
And just like in those economies, the UK consumer is suddenly spending a lot less too, most especially when you exclude the cost of filling her or his car. 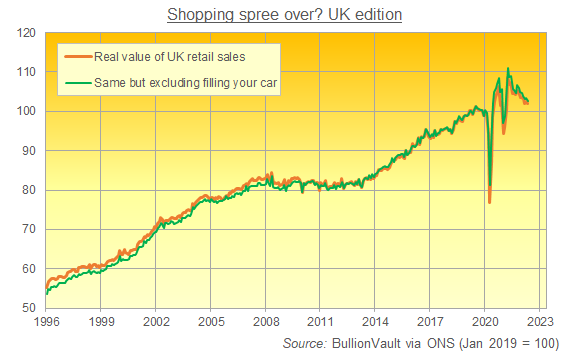 Roughly speaking, this chart shows you the volume of UK retail sales...
...the quantity of stuff which consumers bought at shops and stores, both with (orange) and without the money spent filling up gas tanks at the pump (green).
Last month, that spending had sunk by nearly £8 in every £100 compared to the pre-Covid peak of late-2019.
This would beg the question of where those £8 went instead. If only it wasn't obvious: Inflation has eaten both the value of cash and the UK consumer's appetite for spending today what they will surely need to pay the heating bill this winter.
One place this money certainly isn't going is towards investing for retirement.
"[The cost of living] crisis is reducing people's ability to save because people are spending more every month," said UK brokerage Schroders in April.
Last month it then found that "bearish sentiment" among financial advisors has jumped from just 12% last November to 57% in May. And no wonder.
"The Schroders Pulse Survey sampled 225 UK financial advisers," says IFA Magazine.
"It found that 69% of advisers expect that some of their clients will have to adjust their investment plans due to the cost of living crisis."
Indeed, the UK fund management industry reports net outflows from household accounts of £7.1 billion for the first 3 months of this year...
...more than erasing the inflows of the previous calendar quarter...
...and with a paltry half-billion coming back in during April.
But it's not just equity or bond funds getting hit.
"Our research shows almost a third of people were planning to reduce the amount they were saving, while a fifth would stop altogether," says insurance company Royal London.
And why not? "For those who can save, the gap between [UK] interest rates and inflation, now at 9%, means savers are continuing to lose value on cash they have in the bank."
Same story in the USA. More than 2-in-5 respondents to a survey in March said they had already been forced to tap into the money they had previously set aside for retirement, and brokerage Fidelity says that during the first 3 months of 2022 the average 401k plan shrank by $10,000. Another survey last month then found that 1-in-4 Americans will have to delay retirement because of inflation's impact on their ability to save.
The misery has only worsened since then.
So why isn't the gold price surging? 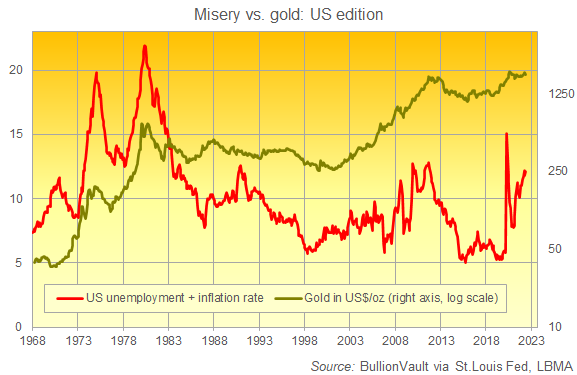 According to consumers everywhere, the 1970s weren't quite as awful as today.
But the 1970s' high inflation and high unemployment caused lots of misery.
So much so, in fact, that economist (and sometime White House advisor) Arthur Okun created an index and a chart just so we could track it.
"The situation was called 'stag-flation'," explains a brief history of how the 1970s gave birth to the Misery Index.
"Stagflation was caused primarily by an OPEC boycott on oil shipments from the Middle East to the United States and other Western nations...
"[That] drove up prices and slowed down economic growth."
Hmm, an energy crisis, inflation, then recession and stagflation. Sound familiar?
Arthur Okun's infamous index simply adds the rate of inflation to the unemployment rate.
You can see above how it jumped during the 1970s. It puts today's level of Misery in the shade. For now.
The 1970s also saw a surge in gold investing demand, and that drove gold prices much higher too.
So much higher, in fact, our chart above uses a log scale on the right-hand axis the better to show how fast gold prices jumped.
Gold investment demand for gold then fell, as did prices, when Misery eased off during the 'Long Boom' of the 1980s and '90s...
...before returning with a vengeance in the 2000s, then fading last decade as the financial crisis receded, only to revive again on recession fears, Covid, rising inflation, and now Russia's invasion of Ukraine.
The Misery Index has mapped these peaks and the troughs pretty well, matching the longer-term rises and falls in gold as you can see above. That pattern is continued if not confirmed by gold's strong underlying gains over the last 3 years as well.
What's different this time, however, is what is driving the Misery Index higher. Because the jump in 2022 has, so far, found US unemployment still sitting near those 5-decade lows.

Sure, lots of people think inflation is probably peaking right now.
They point to the sudden bear market in copper and the plateau in crude oil prices as reasons to think these 4-decade highs are the top for the cost-of-living crisis.
But even if inflation flat-lines or falls from here, what happens if – or rather, when – the jobless rate rises from its lowest in pretty much forever?
I know, I know. Gold investors are often cast as 'doom mongers' by journalists and anti-gold analysts. And a quick glance at the Misery Index suggests that investors more broadly do tend to buy gold when things turn awful, super-charging its price as mainstream money pours in.
As it is today however, gold bullion is suffering the same inflation-shock loss of new investing dollars as equity funds, savings products and retirement accounts.
Here at BullionVault, for instance, June is always a quiet month for new account openings. Usually the sunshine and longer evenings seem to dispel the gloom which gold perhaps needs to find new first-time buyers. But this June is proving the rule, even as stagflation sees  the Misery Index test its financial-crisis peaks of 2010 and 2011.
How much Misery might it take to shake those absent buyers into choosing gold?
Look, no one wants unemployment to rise. (Well, not outside Western central banks. Both the US Fed and the Bank of England are pretty much on record as saying that raising interest rates to "attack" inflation – even when rates are still so far below zero in real terms – aims at depressing economic demand outside the war-torn energy markets, slowing the cost of living by throwing people out of work.)
But just because we all hope real Misery won't strike doesn't mean we can't try to hedge against it. And before the wider mass of investors catch on, too.