END_OF_DOCUMENT_TOKEN_TO_BE_REPLACED

2021 update after Covid decline...
GOLD is one of the rarest elements in the world, making up between 0.001 and 0.006 parts per million of the earth's crust, writes Frank Holmes at US Global Investors.
But how much gold is the world digging up each year and what countries produce the most?
According to data released by the World Gold Council (WGC), global gold mine production in 2020 was 3,478.1 tonnes (122.7 million ounces), down slightly for the second year in a row after rising consecutively for the past few years.
Obviously the pandemic contributed to this slowdown last year, but we may also be seeing the consequences of steadily shrinking exploration budgets. 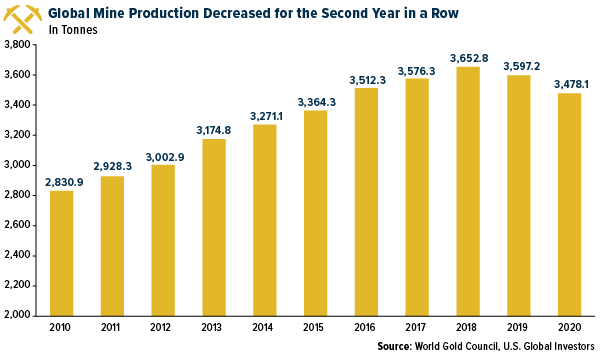 This raises the question whether peak gold has finally arrived. The low-hanging fruit has already been mined, and giant deposits containing many millions of ounces of gold are not being discovered at the same rate as they once were.
Consider South Africa. The country was at one time the global leader in gold output, digging up over 1,000 tonnes in 1970, but since then its volume has rapidly declined. Last year it slipped out of the list of top 10 gold producers altogether.
Besides South Africa leaving the top 10, the list saw a few other minor changes from 2019. Peru also disappeared, making room for Uzbekistan, while Brazil advanced a few spots. Ghana remains the only African country to appear in the top 10. 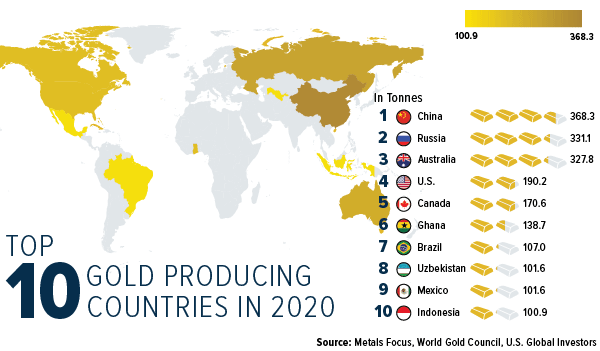 Below are further details on the top 10 countries with the largest gold production in 2020, starting with China, the top producer as well as the top consumer. All data is from the WGC as of June 2021.
#1. China: 368.3 tonnes
For many years, China has been the top producing nation, accounting for 11 percent of global mine production. However, production fell from 383 tonnes to 368 last year, representing the fourth consecutive year of declines. The downtrend is largely due to tighter environmental policies imposed by the government. For example, stricter control over the use of cyanide at gold mines has forced several operations to cut back production.
#2. Russia: 331.1 tonnes
A huge majority of Europe's gold comes from Russia, which has been increasing its production every year since 2010. In 2019, Russia surpassed Australia to become the world's second largest producer. Who is the largest buyer of Russian gold? The Russian government, of course, which purchases around two-thirds of all gold produced locally.
#3. Australia: 327.8 tonnes
Australia has now posted eight consecutive years of production increases. The minerals industry produces over half of Australia's total exports and generates about 8% of GDP. Higher production at several mines and the ramp up of projects such as Mount Morgans and Cadia Valley contributed to increased production.
#4. United States: 190.2 tonnes
Gold output in the US fell below 200 tonnes for the first time in several years, continuing a decline that began in 2019. Close to 80% of the gold produced in the US is from Nevada. If the state were its own country, it would be one of the world's top 10 miners.
#5. Canada: 170.6 tonnes
Canada has held the number five spot for four years now, even after mining 12 fewer tonnes in 2020 than it did the previous year. The country's top gold mine was Canadian Malartic, co-owned by Yamana Gold and Agnico Eagle, which was responsible for producing over 16 tonnes last year.
#6. Ghana: 138.7 tonnes
Ghana is Africa's largest producer of gold, beating out South Africa for the first time in 2019, and is also known for its reserves of various industrial minerals. Industry majors such as AngloGold Ashanti and Gold Fields have shifted their focus from South Africa to Ghana where deposits are cheaper and easier to mine.
#7. Brazil: 107.0 tonnes
Moving up from the number 10 slot in 2019 is Brazil, which increased its output for the third straight year. Illegal mining activity has risen sharply in the last six years in the heart of the Amazon rainforest. President Jair Bolsonaro has pushed the country to develop the Amazon economically and tap its mineral riches.
#8. Uzbekistan: 101.6 tonnes
Uzbekistan significantly increased its output last year, from 94.6 tonnes in 2019 to 101.6 tonnes, the first time it's exceeded 100 tonnes in one year. The Central Asian country is home to Muruntau, the world's largest open-pit gold mine by area. The project, which also contains huge deposits of turquoise and arsenic, sits atop what many geologists believe could be the biggest gold reserve in the world.
#9. Mexico: 101.6 tonnes
Although production fell for a fifth straight year, Mexico remains a competitive gold source. Output rose from just 50.8 tonnes in 2008 to peak at over 131 tonnes in 2015, one of the largest increases in that time span. Mexico is an attractive place for mining due to a relatively low cost of regulation.
#10. Indonesia: 100.9 tonnes
Indonesia is home to the second largest gold mine and world's highest, Grasberg, which is operated by PT Freeport Indonesia and has as many as 20,000 workers. The South Pacific country is responsible for mining around 3% of global supply.