END_OF_DOCUMENT_TOKEN_TO_BE_REPLACED

How would those who've made a Gold Investment fare if things got really bad...?

ASIDE from Mayan prophecies, many of the senior Casey Research staff believe that economic, monetary, and fiscal pressures could come to a head this year, writes Casey's Big Gold editor Jeff Clark.

The massive buildup of global debt, continued reckless deficit spending, and the lack of sound political leadership to reverse either trend point to a potentially ugly tipping point. What happens to our investments if we enter another recession or – gulp – a depression?

Here's an updated snapshot of the Gold Price during each recession since 1955. 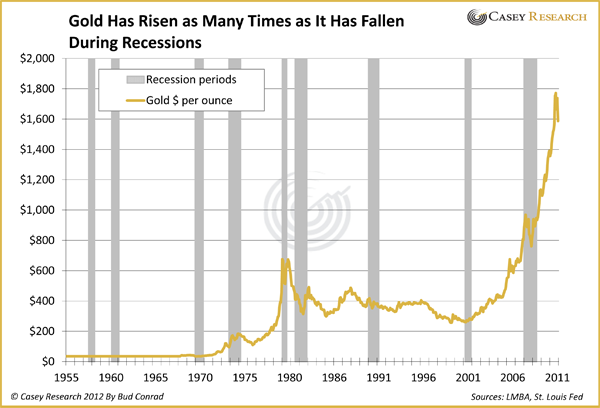 Clearly, one should not assume that gold will perform poorly during a recession. Even in the crash of 2008, gold still ended the year with a 5% gain. And with the amount of currency dilution we've undergone since that time, it seems more likely gold will rise in any economic contraction than fall.

Indeed, if the response of government to a recession is more money printing, precious metals will be a critical asset to have in your possession.

Even if the Gold Price ends up flat or down this year, the CPI won't. Gold's enduring purchasing power is why we hold the metal.

How about gold stocks? 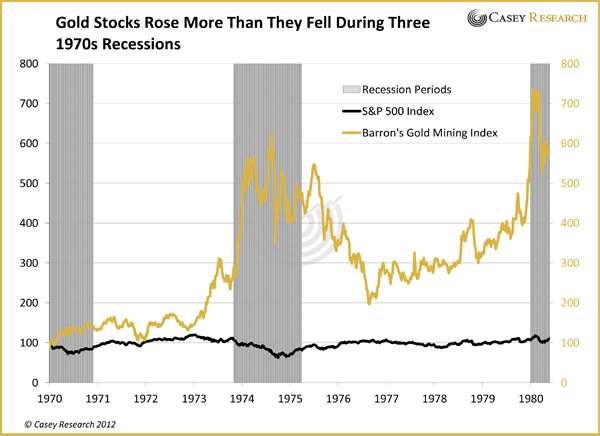 In spite of the debilitating 1970s that suffered from stagflation, price controls, three recessions, and the Vietnam war, gold producers rose over 600% while the S&P was basically flat. And that includes a roughly 65% fire-sale correction, much like we saw in 2008.

To be clear, gold and silver stocks won't be immune to selloffs if a recession or worse temporarily clobbers our industry. But in the end, we at Casey are convinced they will prevail.

Buying Gold as physical bullion? See how BullionVault can save you money...