END_OF_DOCUMENT_TOKEN_TO_BE_REPLACED

Gold investment grows as inflation whacks stocks, bonds...
GOLD INVESTING demand jumped to a 10-month high in April as bond prices and global stock markets tumbled, writes Adrian Ash at BullionVault.
Last month's rise in bullion demand came as gold prices outside the US Dollar hit near or new record highs despite expectations that central banks – led by the Federal Reserve – will hike interest rates sharply to try countering the worst inflation in decades,
But central banks lag so far behind inflation that real returns from cash and bonds remain more deeply negative than during the 1970s, and that's boosting demand to invest in gold as a rare, tangible store of value.
Net of customer selling, BullionVault users bought almost a quarter tonne of investment gold in April, the most since June last year.
Together with March's small net buying, that means the last 2 months have now reversed half of New Year 2022's half-tonne outflow, taking total client holdings up to 47.2 tonnes – all vaulted and insured in each client's choice of London, New York, Singapore, Toronto or most popular Zurich – worth $2.9 billion (£2.3bn, €2.8bn, ¥507bn). 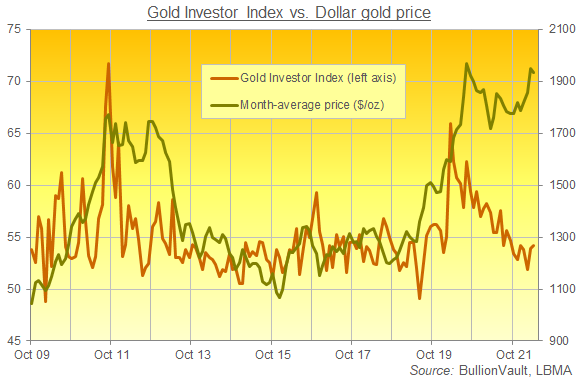 The number of people buying gold for investment eased back in April, dropping 25.3% from March's count, when Russia's invasion of Ukraine spurred the fastest monthly jump in the number of gold buyers since the Covid Crisis began 2 years earlier.
The number of sellers fell back nearly twice as hard, down 46.4% to the fewest since January.
Together that saw the Gold Investor Index – a unique measure of private investing sentiment using proprietary data from BullionVault, the 24-hour precious metals exchange online – rise 0.3 points to 54.2, matching its highest level of the last 7 months.
The series shows the balance of net buyers over net sellers across each month as a proportion of all owners at the start, rebased to 50.
BullionVault's figures complement other gold and silver market data, showing revealed preference – not survey-based 'intentions' – among the world's largest single pool of self-directed bullion investors.
Why is gold investing so strong in the face of higher central-bank policy rates, never mind the surge in longer-term bond yields?
Rising interest rates naturally present a headwind for gold prices, because the precious metal pays no income. But Dollar strength ahead of this week's widely expected half-point hike from the US Fed is masking gold's resilience.
While European stock markets have lost 10% so far this year, gold has gained 10% in both Euro and Sterling terms. On a population-weighted basis, central-bank policy rates across the G7 economies now lag inflation by an average of 6.3 percentage points. Gold prices have risen 7.2% so far in 2022.
Devaluation, in other words, continues to drive investors to diversify with gold as inflation hits currencies, bonds and equities. And while the strong US Dollar pushed gold prices lower last month from March's near-record monthly average – down 0.7% to $1934 per ounce – bullion rose over 1.2% for both Euro and UK investors.
Gold investing prices set a new Euro record at €1790 and averaged £1496.50 for UK investors, just £3.50 below August 2020's all-time Sterling high. 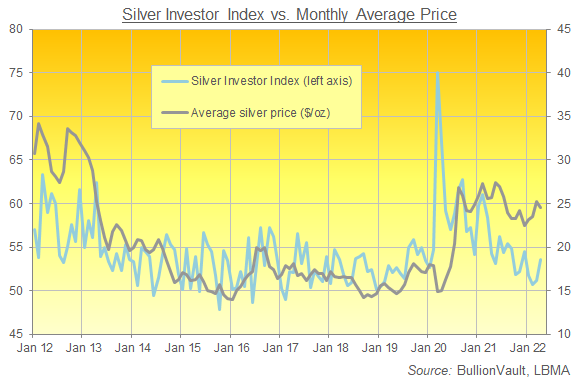 Unlike gold, the price of silver – which finds over half its demand (52%) from industrial and technological uses, contrasting with just 8% for gold – fell in terms of all major currencies in April.
That snapped a run of profit-taking, with the Silver Investor Index rising at its fastest pace since June 2021, up 2.4 points to a 4-month high of 53.6.
Silver demand was also positive by weight, recording net buying among BullionVault users for the first month in six and expanding total client holdings to 1,220 tonnes – almost 6 tonnes larger from end-March's 10-month low – worth $0.9 billion (£0.7bn, €0.9bn, ¥120bn).
Meanwhile however, Wednesday's rate decision from the US Fed looms across all asset classes, and silver's weaker price has already been joined in May near 3-month lows for gold in US Dollar terms.
But prices to invest in gold for UK and Euro residents are holding much firmer, even as bond prices continue to plunge, driving up Gilt yields to offer new buyers the highest nominal rate since late-2015 while German Bund yields lead longer-term Euro rates up to the highest in 8 years.
That still leaves 10-year Bund yields almost 7 percentage points below Germany's latest inflation data with UK yields lagging UK inflation by four.
Savers and income investors have rarely or never had it so bad. Little wonder the number of people opting to hold some gold, silver or other physical precious metal is rising.
Attachments: