END_OF_DOCUMENT_TOKEN_TO_BE_REPLACED

Or it was. But gold grades are fading fast as new reserves get harder to find...
In the GOLD MINING business, it is said that grade is king, writes Andrey Dashkov, research analyst with Casey Research.
A high-grade project attracts attention and money. High-grade drill intercepts can send an exploration company's stock price higher by an order of magnitude. As a gold project moves to the development stage, the higher the grade, the more robust the projected economics of a project. And for a mine in production, the higher the grade, the more technical sins and price fluctuations it can survive.
It is also said that the "low-hanging fruit" of high-grade deposits has all been picked, forcing miners to put lower-grade material into production.
You could call it Peak Gold – and argue that the peak is already behind us. Let's test that claim and give it some context.
One of the ways to look at grades is to compare today's highest-grade gold mines to those from the past. We pulled grade data from the world's ten highest-grade gold mines for the following chart. 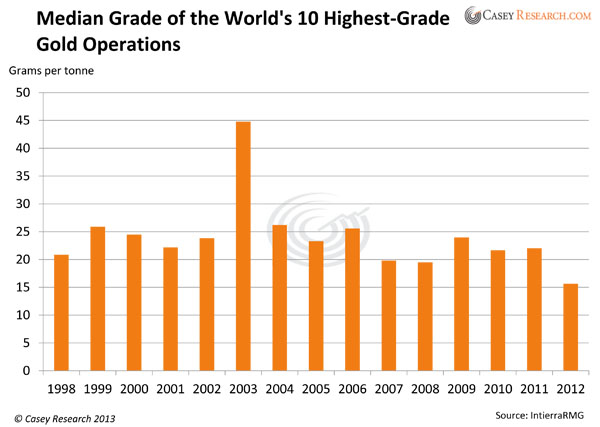 As of last year, grades at the richest mines have fallen an average of 20% since 1998. However, except for 2003, when the numbers were influenced by the Natividad gold/silver project (average grade 317.6 g/t Au) and Jerritt Canyon (245.2 g/t Au), the fourteen-year trend is relatively stable and not so steeply declining. The spike in 2003 looks more like an outlier than Peak Gold.
However, these results don't provide much insight into the resource sector as a whole, one reason being that the highest-grade mines have vastly different production profiles.
For example, Natividad – owned by Compañía Minera Natividad y Anexas – produced over 1 million ounces in 2003 from ore grading over 300 g/t gold, while the San Pablo mine owned by DynaResource de Mexico produced only 5,000 ounces of gold from 25 g/t Au ore in the same year.
This made San Pablo one of the world's ten highest-grade operations in 2003, but its impact on global gold supply was minimal. In short, the group is too diverse to draw any solid conclusions.
We then turned to the world's top 10 largest operations, a more representative operation, and tallied their grades since 1998. 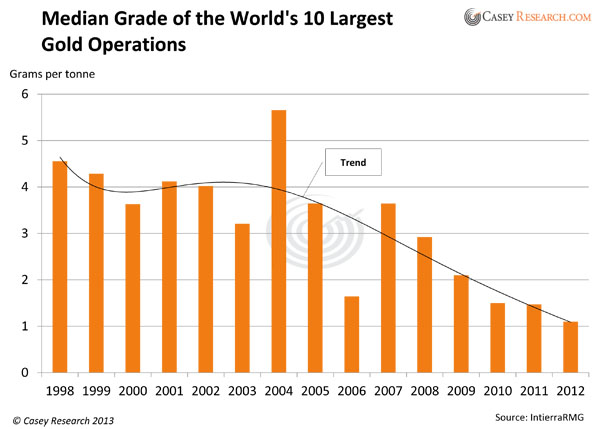 The picture here is more telling. Since 1998, gold grades of the world's top ten operations have fallen from 4.6 g/t gold in 1998 to 1.1 g/t gold in 2012.
This does indeed look like Peak Gold, in terms of the easier-to-find, higher-grade production having already peaked, but it's not as concerning as you might think. As gold prices increased from $302 per ounce at the end of 1998 to the latest price of $1377, both low-grade areas of existing operations and new projects whose grades were previously unprofitable became potential winners.
Expanding existing operations into lower-grade zones near an existing operation is the cheapest way to increase revenue in a rising gold price environment. So many companies did just that.
Indeed, the largest gold operations – the type we included in the above chart – would be the first ones to drop their gold grades when prices are higher, simply due to the fact that what they lose in grade they can make up in tonnage run through existing processing facilities. Larger size allows lower-grade material to be profitable because of economies of scale. New technologies have helped to make lower-grade deposits economic as well.
So, at least until 2011, the conventional wisdom of "grade is king" was being replaced by "size is king."
However, production costs have been increasing as well – and have continued increasing even as metals prices have retreated in recent years. Rising operating costs and capital misallocations (growth for growth's sake, for example) are at least partly to blame for miners' underperformance this year.
Suddenly, grade seems to be recovering its crown. It remains to be seen whether more high-grade discoveries can actually be made, or whether Peak Gold is actually behind us.
Truth is, there is no king. Grade and size, although among the most important variables in the mining business, tell only part of the story. Neither higher grades nor monster size prove profitability by themselves – the margin they generate at a given point in time is what matters most. And then what the company does with its income matters, too.
Now that the industry has moved on from a period of reckless expansion, we expect investors to become more demanding of the economic characteristics of new projects coming online. Existing mines that processed low-grade ore in a rising gold price environment are now judged by the flexibility they have to cut costs, increase margins, and persevere through gold price fluctuations.
It's true that high enough grade can trump all other factors in a mining project, but it's the task of a company's management to navigate the changing environment, control operating costs, and oversee the company's growth strategy so that it creates shareholder value.
The resource sector has had a sober awakening, and now we see many companies changing their priorities from expansion to profitability, which depends on many parameters in addition to grade. This is a good thing.
As for Peak Gold, if that does indeed turn out to be behind us, the big, bulk-tonnage low-grade deposits that are falling out of favor today will become prime assets in the future. It'll either be that or go without.
Times may be tough, but the story of the current gold bull cycle isn't done being written. The better companies will survive the downturn and thrive in the next chapter. Identifying these is the ongoing focus of our work.