END_OF_DOCUMENT_TOKEN_TO_BE_REPLACED

To start, let's go over the rules of this long-term trade.

The Dow-to-Gold ratio is Bill Bonner's guide for when to get in and out of stocks.

In other words, when the entire Dow can be bought for five ounces of gold, we buy stocks. When it takes 15 ounces or more to buy the Dow, we sell stocks and buy gold.

Over the past 100 years, you would have made a total of six trades based on this strategy. 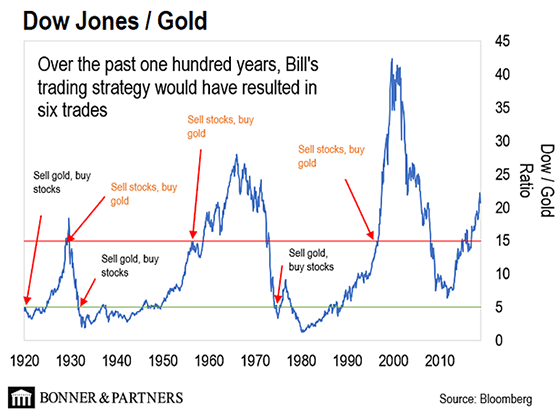 Note: Bill's original calculations, starting in 1999, did not account for reinvested dividends from stocks purchased. But to give a fuller picture of the trade, the below calculations are based on the total return.

Between 1929 and 1931, the price of gold doesn't move. But by getting out of stocks in February 1929, we have avoided the worst stock market crash in history in October 1929.

By getting out of stocks and into gold in July 1996, we sit out the current bull market in US stocks. But we also completely avoid the dot-com bust in 2000 and the crash of 2008.

By comparison, a simple "buy-and-hold" investment in the Dow from 1918 to now would have yielded an annual return of 10.44% with dividends reinvested. The gain on this trade would have been $4.26 million.

Bill's strategy is based on a simple premise: You make money by buying stocks when they are cheap and selling them when they are expensive. And that's how you turn $206 into $8.4 million over the long haul.