END_OF_DOCUMENT_TOKEN_TO_BE_REPLACED

The gold-silver ratio is historically high...

SO THE Bureau of Labor Statistics (BLS) tells us that the economy added 244,000 jobs in April. The private sector added 268,000 jobs; government cut 24,000, writes Addison Wiggin for the Daily Reckoning.

However, 175,000 of those new jobs can be attributed to the BLS's "birth/death model" – in which the economists guess at the numbers based on the launch of new businesses and the demise of old ones.

In other words, nearly three-quarters of these new jobs are a statistical invention. And most of the rest are the 62,000 people McDonald's hired in a one-day job fair publicity stunt.

The separate household survey is nothing to write home about, however:

As always in these situations, we turn to the two figures the statisticians can't game: 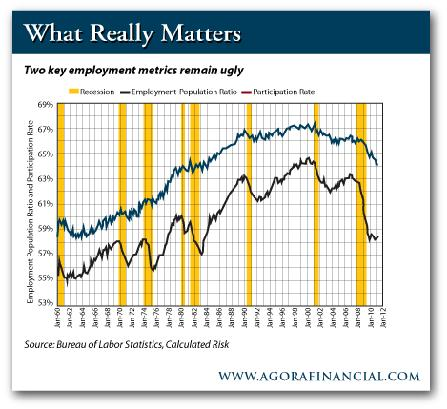 The top line is the percentage of the working-age population in the labor force. The lower line is the employment rate of the overall population. Both lines are stuck at the same level they were when Hollywood inflicted the first Police Academy movie on an unsuspecting populace and Paul Volcker was getting kudos for "slaying inflation."

But as long as the narrative is that job growth is on track – whew, what a turnaround in just 24 hours – we will get results like this…

This number is important in terms of the long-term trend. A few years ago, Tennessee bullion dealer Franklin Sanders assembled this chart going back to the Coinage Act of 1792. We've updated it to the present day: 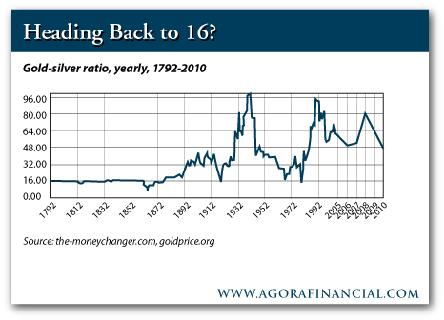 In the century since the creation of the Federal Reserve, the ratio's been all over the place. The key is that it's bottomed at or around 16 three times in the last century – 1919, 1968 and 1980.

Sanders is among many who believe long term, it's headed back toward 16. Canadian fund genius Eric Sprott is another. Sixteen was the ratio for centuries before massive silver discoveries in the Americas in the 1800s.

With gold at $1,500 today, a 16:1 gold-silver ratio implies $94 silver. That's a compelling case for silver… and with the ratio reverting for the moment above 40, silver's on sale.