END_OF_DOCUMENT_TOKEN_TO_BE_REPLACED

Gold prices, as yet, remain unmoved by the Chinese New Year of the Horse...
WHAT should gold investors and traders expect from the Chinese New Year, marked with near-month long celebrations from tomorrow? asks Adrian Ash at Bullionvault, now in Chinese.
First, expect yet more press coverage of housewives and single young men buying gold hand over fist to mark the start of the Year of the Horse.
Expect also to learn that China is (drum-roll please) the world's No.1 gold miner and No.1 consumer, but not why (the long collapse of South African output, and the 2013 collapse of Indian imports thanks to the government's attack on the trade deficit).
The lunar New Year marks an auspicious time to buy gold, you'll be told. It also marks a retail frenzy, pictures from Shanghai and Shenzen shopping malls will show.
But will that push gold and silver higher?
Nope. The New Year move in world prices would have already come if it mattered, before the celebrations, not when shoppers hurry home with their treasure. Sure, wholesale demand from Chinese stockists did indeed seem to coincide with January 2014's rising bid for gold. But in terms of China's impact on world gold prices, the inflows themselves would have come earlier, giving importers time to arrange and land new shipments. Which they did. Only prices fell.
There was a "rapid rise in local inventory in August-November 2013 by local traders," as consultancy Metals Focus notes, "in order to avoid running out of stocks before the Chinese New Year." November and December then both saw gold imports through Hong Kong, the major point of entry, fall below 100 tonnes per month (net of re-exports). Lower Chinese import demand did coincide with a nasty retreat in the world gold price, back towards the three-year lows set in mid-2013. But whatever relationship China's import demand had on world gold prices, its impact was again far from simple. Because premiums for gold delivered from the Shanghai Gold Exchange, over and above world prices, again spiked as gold hit $1180 per ounce, rising to $20 after hitting $30 per ounce at the same mid-summer low.
Might that Chinese premium reflect the impact which China would have on gold prices if only the world followed Shanghai as its benchmark rather than London? If so, then the world's No.1 mining nation and physical buyer would still have done little to stem 2013's slump in gold prices. The end-June premium would scarcely have kept prices above $1200 per ounce at the low. And yet China's importers bought gold hand over fist to feed its wholesalers who met unprecedented household demand.
What gives? The simplest explanation, we suggest, is that final end-consumer gold buying doesn't move world prices. Not from people who buy gold because it is gold. They tend to want more when prices fall, and vice versa. The people who count are instead those who buy gold because it isn't anything else.
Witness the loss of India, former world No.1, in mid-2013. Driven by religious, cultural and social forces running back to pre-Roman times, Indian households were on track for a record year as prices slumped last spring. Because prices were slumping.
That huge call on physical gold then got cut off from the world market by the government's anti-import rules (aimed at reducing India's massive trade deficit). Yet the back-half of 2013 then saw sideways price action overall. Gold ended December back where it was at the end of June, which was when India's import restrictions (effectively a ban) really got started.
Now, just as the loss of India failed to pull prices lower (and even with India locked out of new imports ahead of Diwali, its own peak demand season), so China's New Year surge won't reverse much of last year's slump. Not yet.
Money managers in the developed West continue to drive, moving prices by pouring in cash (or sucking it out) that would otherwise go into other, financial assets. Remember how last year's crash was all done by midsummer? Seventy per cent of the 550 tonnes of gold leaving the giant New York-listed SDPR Gold Trust in 2013 was gone by end-June. Speculators in US gold futures and options had by then slashed their net bullish position by four-fifths, cutting it to what proved the low for 2013, equal to barely 100 tonnes.
What might give China's demand to buy gold more impact on prices this year? Analysts are split either way. One calls it "make or break" for gold in 2014. But they are all watching what the world's new No.1 is doing very closely.
And with Western money managers cutting their interest in gold to levels last seen at the bottom of the previous 20-year bear market, the sheer weight of China's wealth might start to count soon. After all, per head of the population, the world's second-largest economy creates GDP more than four times the size of India's, the former gold No.1.
What's more, China's fast-growing middle-class is set to enjoy a new, broader range of financial services products to choose from. Late 2013's third plenum of the current politburo made "market-based reform" a top priority.
Some gold analysts think wider financial choices mean Chinese investors and households will buy less gold. That's a guess. But it would most certainly mean people stop buying gold for its own sake, and can start buying (or selling it) because of what they expect will happen to other, financial asset classes. 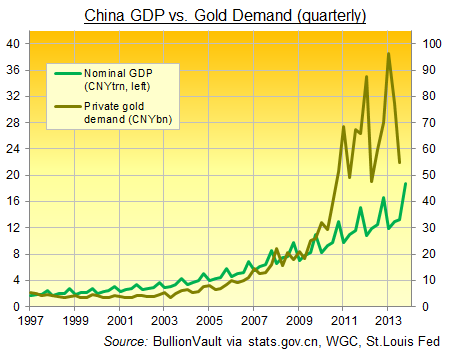 Already, the growth in China's gold demand since deregulation began in 2002 has been extraordinary:
Why did 2013 gold prices sink then, pulling silver down too?
Because China's private households remain, in the main, a gold consumer, not investor. So they are price takers, not price setters, as leading analyst (and now Hong Kong-based) Philip Klapwijk put it in this presentation in December.
Speculation (whether from Western journalists or analysts) that China's surging 2013 demand included gold buying by Beijing's central bank still leads to the same conclusion. The People's Bank would a price taker, and happy to be so when prices drop 30% in a year. If only it were a buyer. Which on its own balance-sheet, and in its public statements (repeating a long-stated desire not to drive prices higher...hurting would-be household buyers...by unleashing Western speculative dollars into the market), it made plain it wasn't in 2013. The PBoC added no gold to its reported reserves for the fourth year running.
Still, looking back to the last adjustment in 2009, that's not to say another state agency didn't buy gold in 2013, and now holds that metal ready for the PBoC to take into reserves sometime in future.
Equally uncertain, but a Beijing-based rumor instead, is that the politburo has opened up China's gold-import quotas to foreign banks for the first time. Letting HSBC and ANZ Bank import gold won't necessarily support or grow the level of gold demand this year. But it plainly shows the Communist regime is serious about liberalizing China's gold market, and about ensuring future supplies.
Now why would the bureaucrats in charge of the world's second-largest economy want to do that?
Back to this weekend, and Chinese New Year will likely mark the peak season for household gold buying. The Year of the Horse starts Friday 31 January 2014, but the lunar cycle can push Xīnnián back to late February. And by value, China's private end-consumer demand over the first 3 months of the Western calendar year has set new quarterly records 11 times in the last 12 years.
At current prices, a new record for the first quarter of 2014 would see Chinese households and investors buy more than 385 tonnes of gold. And yet here we are, with gold recovering a mere 7% from its second trip to $1180...a level first seen on the way up in December 2009.
Yes, public statements from People's Bank officials have put the gold market at the heart of China's broader financial reforms. So both at the household and state level, China's affinity with physical gold looks set to keep growing. And yes, Beijing also continues to open up its domestic gold market, inviting foreign banks to join the Shanghai Gold Exchange and now (perhaps) inviting a couple to start shipping bullion into the Middle Kingdom as well.
That would cut both ways, bringing more influence to the global market from the world's No.1 gold miner and end-consumer economy. But there's no rush. The PBoC remains wary of encouraging Western speculators to boost prices on word that it's buying for China's reserves. Instead, Beijing continues to allow and encourage private households – whose demand doesn't as yet touch the world wholesale price – to accumulate growing quantities at record values.
If you feel that's smart long-term thinking, then it might also be smart to think about holding a little of your long-term money in the same stuff. Certainly here at Bullionvault, Chinese speakers the world over offer a market we'd be pleased to assist.