END_OF_DOCUMENT_TOKEN_TO_BE_REPLACED

Buying gold cheaper in Dubai, but UAE sales tax looms...
DUBAI has become an attractive destination for Indian citizens buying gold and jewelry thanks to the subcontinent's new GST, writes Steffen Grosshauser at BullionVault – but the boost may prove short-lived as the Arab city-state moves to impose its own sales tax later this year.
Retailers in Dubai report increasing demand among Indian travellers, expats and non-residents in the three weeks since India introduced its new Goods and Services Tax – known as GST.
Domestic demand in India, home to the second-heaviest gold buying households after China, has meantime been heavily dented after the introduction of the 3% GST on gold bullion and 5% charge on jewelry fabrication charges, which came into force on 1 July this year.
India's jewelers have reduced their bullion imports, fearing that the additional tax will damage their profitability. Besides charging customers the new levy, the industry also has to pay 10% import duty, 1% VAT and a 1% excise duty.
The Indian government has increasingly moved to deter gold investing and jewelry purchases in recent years, targeting the industry directly with last November's shock demonetisation of 86% of all bank notes in circulation after repeatedly blaming the country's ancient affinity for the metal for a widening trade deficit and falling Rupee currency. 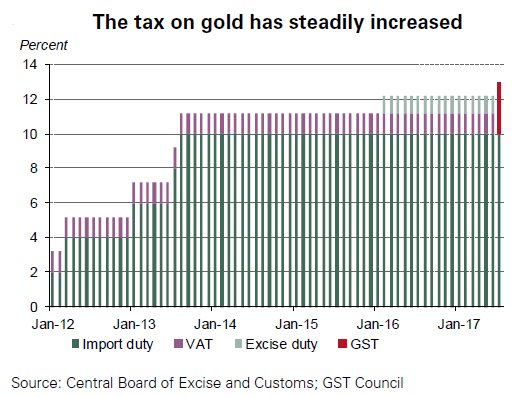 Lower supply also means new jewelry production and exports from India have come to a halt, says the Business Standard – a significant problem as gold accounts for some 18% of the $40 billion in gems and jewelry sales made abroad each year by a sector employing around 1 million skilled and unskilled workers.
"In the pre-GST regime, we paid only import duty of 10% on gold, and passed it on to consumers," explains a leading bullion importer anonymously. "We would now stay away from importing as capital will be blocked for paying IGST" – meaning the Integrated Goods and Service Tax, one of the GST's three categories.
Between them, India and the Middle East account for some 35% of global gold demand each year, with an unknown portion of Dubai's sales destined for the sub-continent, whether carried by air passengers or smuggled to evade the existing charges.
Now GST means that "shopping for gold in Dubai, especially with a 13% difference, is more lucrative [for buyers] and this will divert some business from India to Dubai," says Rajiv Popley, director of a jewelers of the same name.
It remains to be seen how long the UAE and other Gulf states can keep their advantage over gold dealers in India, because they are set to introduce a 5% GST of their own in January next year.
With summer 2017 bringing the typical absence of "auspicious" festivals and wedding dates on Hindu calendars meantime, Indian gold demand is likely to drop dramatically until the autumn – a pattern worsened by July's rally in global prices, according to experts.
"Demand has softened again at current price levels," says Thomson Reuters GFMS analyst Cameron Alexander.
"It had picked up when gold was trading closer to $1200, but has again abated as the market waits for a clearer indication as to which way it may swing."
Mid-July saw Indian dealers  offer a discount versus the world's benchmark of London quotes for the first time in a month, reversing a $2 premium charged on late June's sharp drop in global prices and suggesting a surplus of supply over demand to buy gold.
Moreover, the so-called 'grey market' for gold is set to thrive after the imposition of GST according to The Tribune in India, making gold smuggling into India more attractive again.
"Many customers are buying jewellery from small-time goldsmiths who do not provide proper bills in return for waiving GST," admits an employee of a jewelry chain. However, the purity of gold from these small players is not guaranteed, he warned.
A June report on the Impact of GST from mining-backed lobby organization the World Gold Council also warns that "consumers and jewellers may try to conduct recycling transactions under the counter, away from the prying eye of the taxman".
But despite some "short-term challenges" to the gold industry, GST is likely to be positive for Indian gold demand overall says the WGC's report, because it makes the "gold supply chain more transparent" and helps "boost the country's economy".