END_OF_DOCUMENT_TOKEN_TO_BE_REPLACED

After an especially quiet summer, gold has risen to four-month highs...

I'M WRITING a very rare piece – about the time to Buy Gold, and not the reasons to buy it, writes BullionVault founder Paul Tustain.

It's not my normal teritory; I don't do timing. 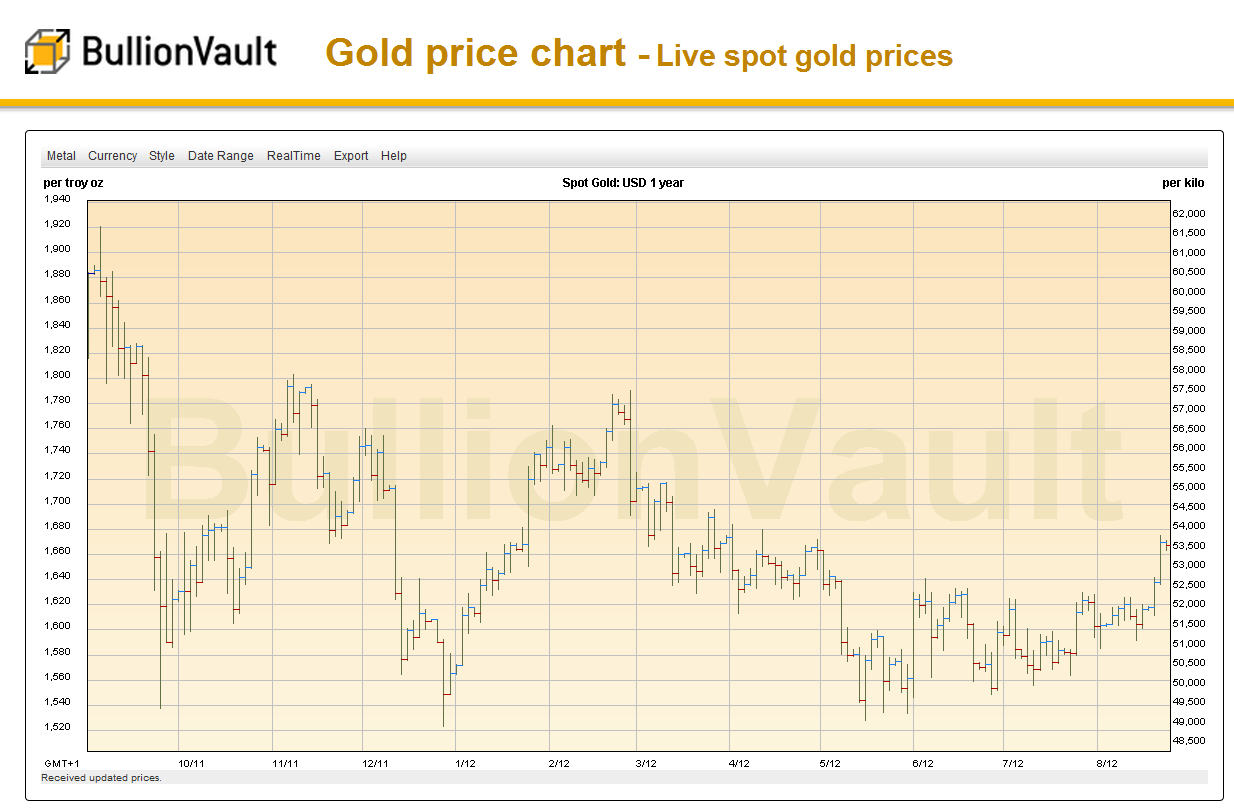 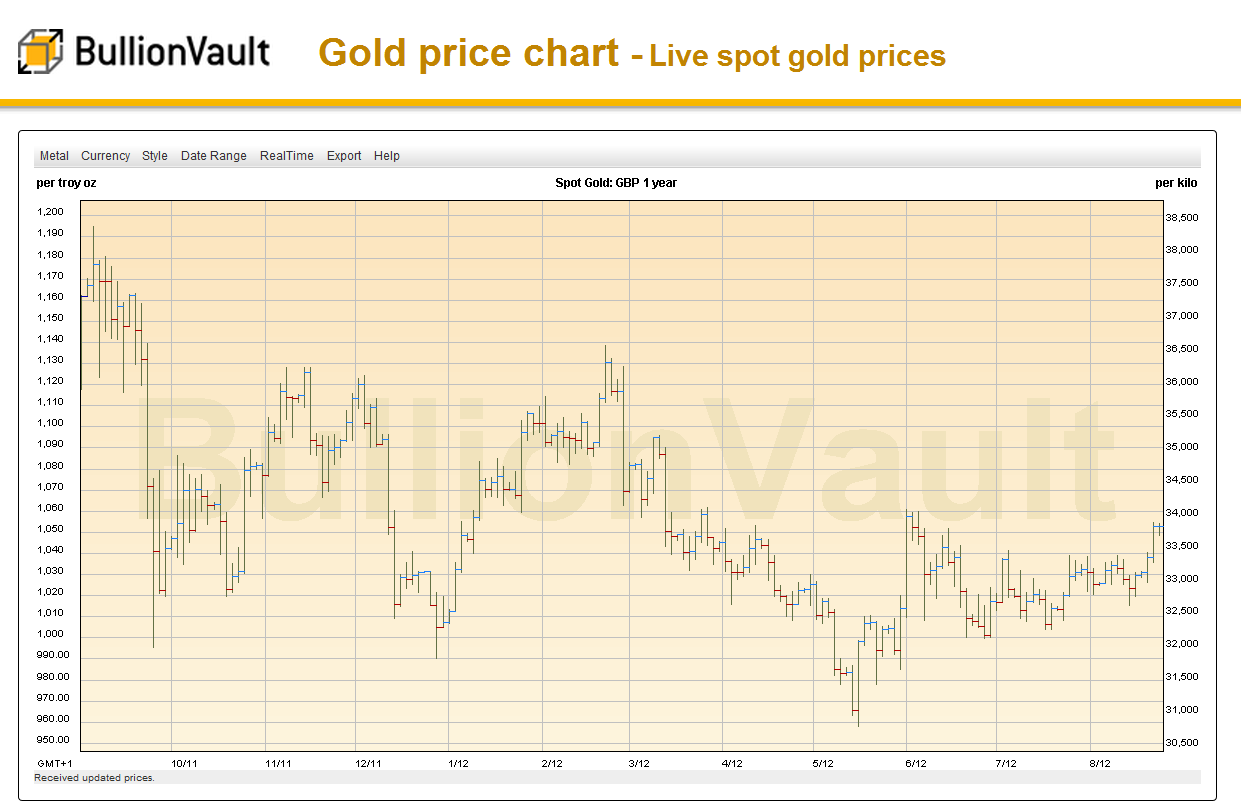 Since then people have left gold alone, and many have sold. But gold has not fallen away like almost everything else would have after a ten year bull run. After a rally this week, it's currently trading around $1660, or £1040. It has taken a breather.

I speak to prospective gold buyers all the time – and they are worried about the situation of our currency – the Pound. Many would like to drop the pound and Buy Gold, yet when it is making new highs daily, like it did a year ago, they worry, understandably, that they'll pay the highest price in history. I do too. But then when it drops away we worry that it has further to fall. In volatile markets buying and selling is frightening.

What volatility? Here in the gold business we have plodded along through July and August, and it's been dull. The rule of thumb in the industry is to expect July and August volumes to be 30% down on the rest of the year. Indeed not much has happened, in fact it's been quieter than usual.

But in the last couple of days things have started moving. Volumes are creeping up again, and prices too. In the 7 years since we launched BullionVault, September has always been a high volume month. This week the holidays end. The money professionals get back to their desks and look into their crystal balls. What will they see, apart from this bowl shaped chart of the Gold Price?

Nothing has improved in Europe. Nothing has improved in the UK – even if we feel temporarily lifted by the Olympics. Our government has got weaker, and borrowed more money; July was dreadful. George Osborne is now under concerted pressure to 'do something', and it's coming from his own side as well as the opposition. As we approach the latter half of a parliament we can reckon his worthy pursuit of economies will weaken.

We are printing new money and adding to the stock at about £16 per working person per day – which all finds its way into the economy via the wages of a bloated public sector. It spins around for a few short weeks, generating modest economic activity, before settling on savers. For some reason, which almost defies logical analysis1, they buy government bonds, thus completing the funding circle; taking cash back out of circulation and leaving just a bigger pile of government debt. Thanks to savers' appetite for gilts we have not seen the retail price inflation which money printing normally produces – but only because we are in this unusual position of printing money without increasing the quantity in circulation.

There will be a flood when those bonds turn back into cash, and that looks increasingly imminent. Already there is a £1trn in outstanding debt, which is evenly spread out to about 20 years. Unfortunately every day it gets less spread out. It slowly concertinas into the short end simply through the passage of time, and as it does so it approaches the concentrated re-financing obligations which finally did for Greece. It's just a matter of time.

For now we only have to finance redemptions and a budget deficit amounting to a mere £500 million a day – which is close to an indigestible quantity for the markets. Now remember, this is a government which is too fragile to impose real economies, which is already a trillion in debt, which is two years from campaigning again, and which controls the printing presses.

Pick a number. 600 million? 750 million? 1 billion? Daily cash demands on this scale will try the generosity of even the most generous pension fund – which, of course, is using your money. We are turning inexorably into Greece. Whatever we do now, the concertina effect will impose these sorts of numbers in due course. This would be true even if we were to cut the record budget deficit today – which is politically impossible anyway.

When the market finally says 'no' to the government's need for cash, the redemption of those outstanding gilts will require printing real banknotes. You'll get your inflation then, and with £6 frozen into bond markets for every £1 in circulation savers will realize that the torrent of melt-water cannot stop for years. That's when we all abandon the currency. Any other store of value will do.

I believe the Pound has a weaker future than a German dominated mini-Euro. But thanks to a year old price spike, and a dull summer, for now at least we can Buy Gold with Sterling at over 10% below its all-time highs. Do you really fancy buying it when it's making daily all-time highs again? I don't. I come out in a rash when I buy something at highs. It goes against my investing religion.

1The reason gilts can be sold is that they are being bought by people who don't care about losing all their money.  It's true!  All a pension fund wants to do is pay you out its nominal obligation in 15 years time.  The way to ensure that is to buy government bonds.  If inflation is around the corner they don't need real investment returns, and they don't really care if the money they pay you only buys you a sandwich a month, so long as their debt is repaid.  Pension payers love inflation.

Looking to Buy Gold? See how BullionVault can dramatically cut your costs...