END_OF_DOCUMENT_TOKEN_TO_BE_REPLACED

Digging into fiat vs. crypto mining...
By COMPARING the money we already use with Bitcoin, we will be better able to decide if it can substitute our long-standing currencies, which certainly have their problems, writes Paul Tustain, founder and chairman of BullionVault.
A strictly limited issue
By design, the total number of Bitcoins in existence will never exceed 21 million. It is a fundamental top limit on their possible issue. About 18.5 million of them have now been digitally mined.
This strict upper limit is a design reaction to an ongoing problem we have with our existing western money systems. These have all fallen under the control of governments, which are abusing their position to create money out of thin air by so called 'fiat', to spend as they choose. Many people, and the large majority of Bitcoin users, believe the uncontrolled issue of fiat currency will in the long run render them worthless.
So Bitcoin and Pounds (or Dollars) differ in that one absolutely cannot be further issued by fiat decree, and the other routinely is.
Yet the outright control and steady fiat corruption of monetary systems by western governments is a relatively modern phenomenon. If you go back to the 1900s and before, you will find government's role in the money system was much smaller.
The traditional creation of money
Back then, the creation of money was done by private institutions – ordinary banks – and the money they created had a value basis resting in real capital.
As the Victorians were building Britain's capital stock the wealth bound up in it could be mobilised – through a private bank – by creating money. It was perfectly sound money, not like the fiat currency we see our governments granting themselves today.
The way it worked was that someone who had property rights over something of value, for example a factory, would persuade a bank that against a promise of this property as collateral he could safely be extended a credit balance in a bank account, alongside a matching debit balance for his loan, secured on his property.
The debit side, together with its parallel collateral agreement, connected newly created money to tangible assets, whose genuine value could be recognised and realised in trade and exchange. Collateral factories can be sold.
That was how money was privately created in those far off days, and how it was directly connected to the real capital wealth from which it derived its fundamental worth.
In just the same way a modern mortgage on a new house creates new money out of a capital asset which has been built, and which has a real value in exchange. A house can be sold to pay down the debit balance on its mortgage account, long after the credit half of the transaction – the money which was created by the mortgage – has been paid to the builder and distributed via the builder's employees and suppliers throughout the economy.
The only difficult bit of managing this connection between money and capital was establishing a meaningful and stable 'unit' of money. That was the government's role. It defined what £1 or $1 meant. It was not directly involved in the creation of money via ordinary commerce.
It's unusual for citizens today to understand how natural and well controlled all this 'free market' private money creation was. Shareholders in banks contributed the original capital buffer, and the bank then created money by collateralising the capital assets belonging to its predominantly local customers.
Private monetary issue could be extended where there was a demand for it, i.e. where owners of capital assets chose to monetise their property, and they paid the bank a fee – interest.
If a borrower went bust then the collateral property was sold. If the bank went bust the shareholders and then the creditors lost their money too.
This organisation of risks left banks standing on their own two feet; there was no such thing as 'too big to fail'. It also persuaded most banks to act with far more monetary caution than you would find in one of our modern western governments.
The destruction of money
Just as money can be created safely, so it can be destroyed safely.
When depositors transfer some of their current account's credit to pay down the outstanding balance on their mortgage the credit money cancels out some of the debt. The money disappears.
Where did it go?
It disappeared in the process of releasing the mortgaged house from its collateral function, and it took the house a few pounds nearer to being the owner's outright property.
This again shows how Victorian money was connected to wealth. Money was much more than the dimly understood 'medium of exchange' which people used; it was a call on real property.
Bitcoin does not have that link to real property. At least, not yet…
Volatility
So back in Victorian times money was routinely created and destroyed, in the normal course of commerce.
This ability to expand when money was short, and to contract when in surplus, created another feature of Victorian money. Because its issued quantity was self-adjusting, a shortage did not drive up its value. Neither did a surplus drive it down. It was the quantity, not the price, which absorbed fluctuations in supply and demand for money.
Bitcoin's limited stock does not have the expansion and contraction mechanism. As a result its price is extremely volatile. 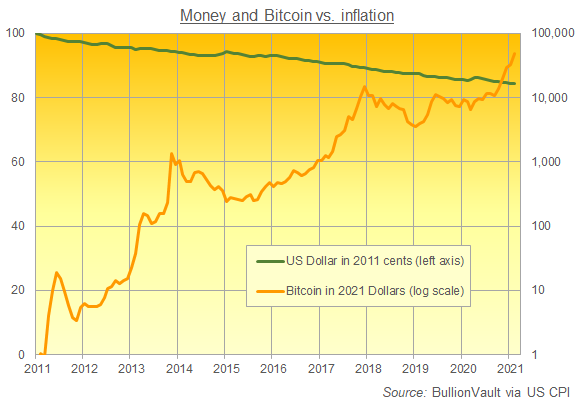 They became particularly widespread in use in the 19th century. At its end British silver trade dollars were minted in both Bombay and Hong Kong, making use of a local supply of bullion and – not being legal tender – did not not need special licence for their production; neither did they find their way back into the banking system as a liability of the Bank of England.
They were produced mostly in the aftermath of the Opium Wars in which Britain (shamefully) went to war with China, won, and forced open her ports for the use of opium traders who were supplying a growing Chinese opioid addiction problem. Silver trade coins became the standard currency for trade in silks, spices, and of course opium.
Trade coins could not be deposited in a bank. Using them depended only on having them in your possession, and finding someone who would accept them.
In some respects, because it represents nothing but itself, Bitcoin seems to resemble a modern electronic version of a bullion trade coin.
Where does this leave gold?
It is hard not to be struck by the similarity between Bitcoin and gold. Both being of no great direct industrial use their usefulness only becomes apparent when you consider their utility as money.
Neither is easily found. Neither is used up. In both cases they deliver a treasured and tightly guarded above ground stockpile which will not shrink and will only grow slowly – thanks to the considerable efforts of miners.
In the final puff of a government corrupted fiat money – when the possibility of hyperinflation makes depositors search for a greater fool – savers are automatically drawn to whatever offers them reliable scarcity. Both Bitcoin and gold appear to offer this.
But there is a big difference in the science of their scarcity. While there certainly could be an emergence of structurally identical 'betcoin' and possibly 'buttcoin' (both of which should find their trade coin niche easily enough) the elemental nature of gold eliminates such potential duplication.
No, as a gold owner I expect that I will be grinding my teeth as I watch Bitcoin soar away for a little while yet. But I doubt mine, or for that matter Elon Musk's, will be the last teeth to grind.