END_OF_DOCUMENT_TOKEN_TO_BE_REPLACED

Why QE didn't devalue the Dollar...

CENTRAL-BANK balancesheets are a function of the "demand for money", writes Nathan Lewis at New World Economics.

This "demand" basically taking two forms: banknotes and coins among the general public, and bank reserves (deposits at the Federal Reserve) among banks.

It is fairly easy to see that the public holds exactly the amount of banknotes that it wishes, and no more. At any time, if people wanted to hold more banknotes, they could go to their nearest ATM machine and get more.

Thus, the total base money – of bank reserves plus notes and coins – is a fixed number determined by the Federal Reserve, but the mix is determined by private behavior.

I have characterized the increase in bank reserves since 2008 as a matter of banks wanting to hold more reserves. This is why this very large increase in supply was not met with a very large decline in the value of the currency, which comes about when supply is in excess of demand.

Broadly speaking, this supply met increased demand from banks to hold reserves on their balance sheets. This basically represented a return to "1950s-style" norms in banking, where bank reserves would be about 10% of total assets. For US domestic banks, the ratio is about 8% today. 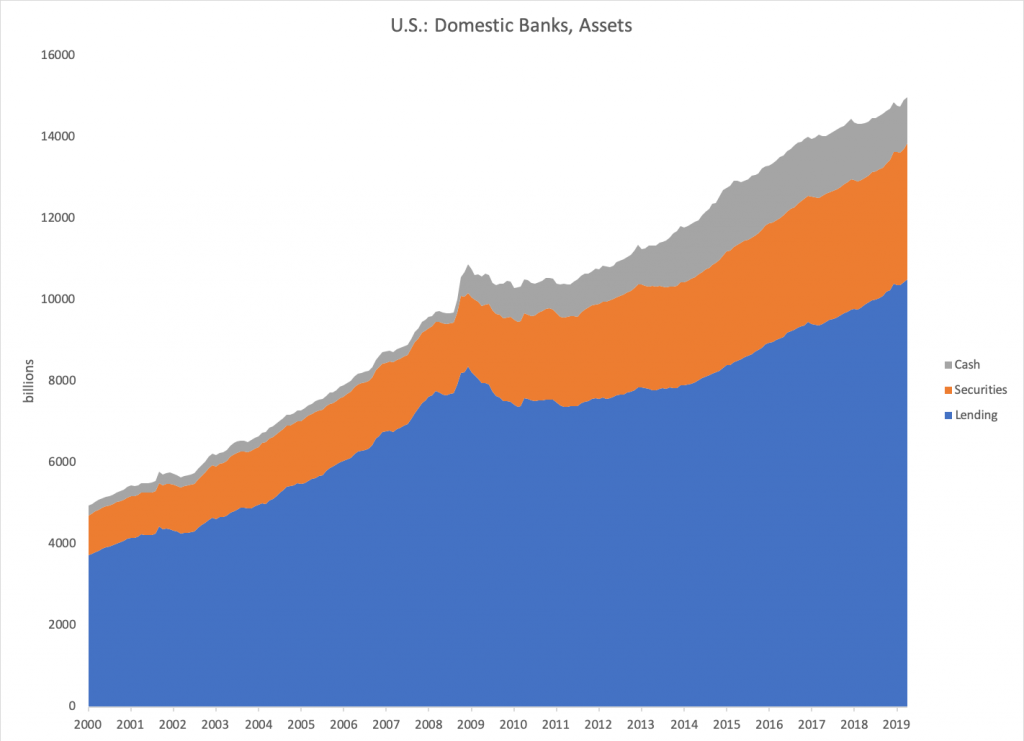 Huge increase in bank reserves since 2008, but also freakishly low levels before 2008.

This increase in reserve demand among banks makes sense from a business perspective, independent of regulation (for example, the very large holdings of bank reserves in the 1930s, far in excess of regulations), but it has also been reflected in regulation.

Basel III was agreed on in November 2010, when the 2008-2009 crisis was acutely remembered. In general, I like the return to "1950s-style" reserve holding patterns among banks, so I am also broadly in favor of the Basel III changes. 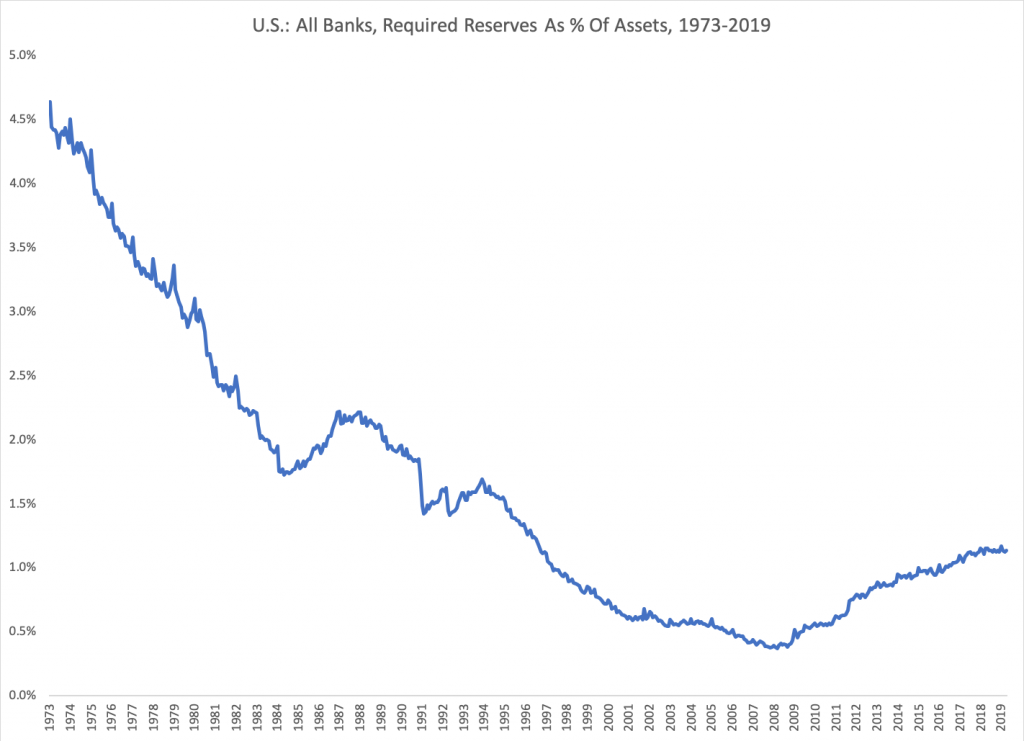 The Basel III requirements have two aspects, the "Liquidity Coverage Ratio" or LCR, and the "Net Stable Funding Ratio" or NSFR. They are complicated. The important thing is how it plays out in real-world action.

The interesting thing is that these requirements have been slowly ramped up, and had full implementation only in 2019.

Take J.P.Morgan Chase's latest annual report for instance. We find that the "high quality liquid assets" amounted to $529 billion at the end of 2018, which included $297 billion of "eligible cash" which "represents cash on deposit at central banks, primarily Federal Reserve Banks." This produced an LCR of 113%, which was a little (13%) in excess of the Basel III requirement of 100%. Since a little cushion is necessary to keep from falling beneath the requirements, 113% is about the "effective minimum requirements."

In other words, big banks like JPM are holding large reserves because they have to, to comply with Basel III, and also because – I argue – that it is a good idea.

Obviously, if banks are going to comply with these requirements, then these bank reserves must exist, and that is why central bank balance sheets, in particular the Federal Reserve in this case, are larger than they were in the past. 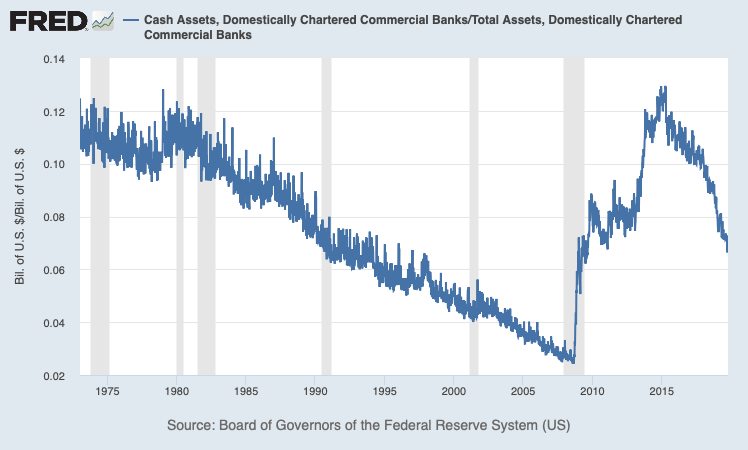 In the past, "cash assets" were a mix of Federal Reserve deposits and other instruments, but today they are basically Fed deposits exclusively. This is also the way it should be in my opinion, and also the way it was in the 1950s. Here we see that the recent bank reserve/assets ratio, among domestic banks, is about 7%. This is way below the 11.3% that is basically a requirement at JPM.

In short, "cash assets" (bank reserves) have been plummeting. They are way above the levels of early 2008, but not very high if we now expect banks to hold 10% of assets in the form of bank reserves at the Fed.