END_OF_DOCUMENT_TOKEN_TO_BE_REPLACED

ACCORDING to the Sermon on the Mount, "lusting after another woman" is a sin – even if you never act on that lust, writes Joel Bowman for Bill Bonner's Daily Reckoning.

But now comes Argentina's Minister of the Interior to assert that lusting after another currency is a crime, even if you never actually trade your Pesos for that other, temptress currency.

The parallel Dollar, or "dolar blue," to which Randazzo refers is the unofficial exchange rate offered by the city's casas de cambios. And thanks to the government's draconian capital control measures, this rate is about the only rate you're likely to get.

The Argentinean government's policy of theft via inflation has created a demand for the relative safety of US Dollars. Obviously, a massive flight from Pesos would create considerable headaches for the Argentine State and its efforts to control "its" people...and their taxable income. And so, even though there is no official rule preventing the purchase of US Dollars (or any other foreign currency), Argentina's equivalent to the IRS, AFIP, has made it virtually impossible to do so through regulated channels (i.e., banks).

Therefore, the informal exchange houses do a roaring trade responding to a very real and honest demand for US Dollars. And there's still enough business left over to maintain a vibrant market for the "green rate." This exchange rate is even less official than the unofficial "blue rate."

The "green rate" is offered by los arbolitos — i.e. "little trees" — who stand along Florida Street waving their arms (like little trees) and offering their exchange services. That rate, currently at 6.20 Pesos to the Dollar, is quite literally the "street price" for Dollars.

The nearby chart shows the wide — and rapidly widening — gap between the official exchange rate and the blue rate, the most often quoted parallel Dollar rate. 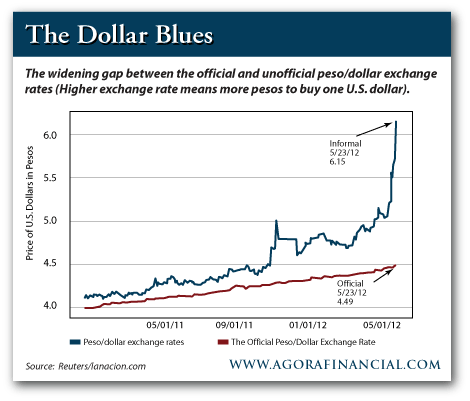 [To keep abreast of the various exchange rates, minute-by-minute, you can check out http://www.dolarblue.net.]

Exactly as you would expect, the more money the government prints, and the tighter the capital controls they impose, the greater the urgency to swap Pesos into Dollars...and the higher the unofficial exchange rates soar.

Clearly, this is a trend that cannot continue indefinitely.

The Argentine State is scrambling to outlaw the consequences of its own recklessness. For years now, Argentina's Central Bank (BCRA) has brought forth freshly inked fiat notes by the billions to pay for unaffordable election promises. Our North American readers will recognize this crafty monetary prestidigitation as "money printing."

The practice is nothing new, of course — neither here nor in any country where the tyranny of the mobjority — democracy — enjoys the power to decide the cost to be levied on the minority.

What seems peculiar about Argentina's case is the government's Herculean effort to ignore the immutable laws of economics in their pursuit of grand larceny. The country has seen five currencies in just the past century, averaging a collapse every twenty years or so. In 1970, the Peso ley replaced the Peso moneda nacional at a rate of 100 to 1. The Peso ley was in turn replaced by the Peso Argentino in 1983 at a rate of 10,000 to 1. That lasted a couple of years, and was then replaced by the Austral, again at a rate of 1,000 to 1. To nobody's surprise, the Austral was itself replaced by the Peso convertible at a rate of 10,000 to 1 in 1992. During the past four decades, when all was said and done, after the various changes of currency and slicing of zeroes, one Peso convertible was equivalent to 10,000,000,000,000 (1013) Pesos moneda nacional.

And yet...the president of Argentina's central bank, Mercedes Marcó del Pont, earlier this year reiterated her commitment and dedication to pathological delusion when she asserted, "It is totally false to say that printing more money generates inflation. Price increases are generated by other phenomena like supply and external sector's behavior."

"Phenomena like supply" is correct, of course...specifically the supply of freshly inked fiat notes issuing forth from Marcó del Pont's printing press.

Like her fellow counterfeiters further north, Argentina's "Fed Head" maintains a steady program of Peso "creation" while bamboozling the population with the kind of nonsensical justifications only a career academic-cum-politician could hope to conjure.

"We're recovering the sovereign capacity to formulate and implement economic policy," babbled Marcó del Pont recently before announcing that some pictures will be coming down from the bank's hall of fame, "beginning with Milton Friedman."

This crude behavior is typical of Argentina's government: If the lessons of history don't agree with the state's agenda, simply remove the lessons from the curriculum...or make abiding by them illegal. Which brings us back to Randazzo's "speech crimes."

If Randazzo has his way, all discussion of what might well be the gravest challenge facing South America's second largest economy would be considered illegal; an act, says he, comparable to quoting the price of a stolen stereo.

But if merely talking about something illegal is, itself, and illegal act, would we not have to slap leg-irons onto Randazzo himself? It is, after all, the reckless monetary policies of the Kirchner government, to which he proudly belongs, that provide the very incentive for the establishment of a parallel rate in the first place. Moreover, would we not have to imprison almost every central banker and treasury secretary in the Western world? Aren't these the same folks who continuously talk about "easing monetary policy"?

That's just money-printing... and money printing is larceny on the grandest scale. Maybe Randazzo is onto something after all!

As we know, Fellow Reckoner, in order to build a big mess, one must start with a small mess. After all, Rome didn't burn in a day. Intervene here...meddle there...regulate this...tax that. Add a little larceny...a pinch of censorship...and a dollop of mind-numbing propaganda "para todos." Pretty soon, you've got a full-scale political and economic disaster on your hands.

Time to Buy Gold? Get securely vaulted Allocated Gold at the lowest price with BullionVault...