END_OF_DOCUMENT_TOKEN_TO_BE_REPLACED

The total volume of all the cash money now in circulation worldwide...

AS of SEPT. 2009, the total amount of physical paper and coin money issued throughout the world was approaching US$4.5 trillion at current exchange rates, writes Mike Hewitt of Dollar Daze.

This map indicates the countries and monetary unions included in this analysis of all the money in the world. 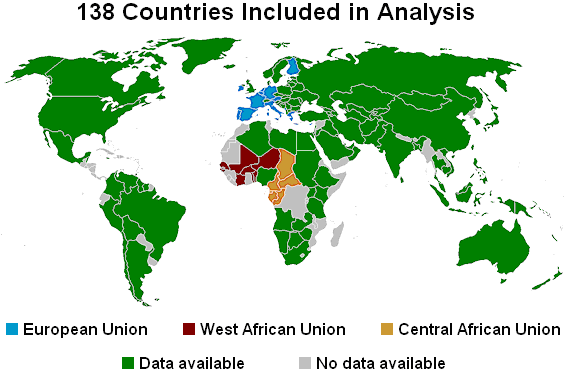 The following graph shows the growth of world money supply since 1971, a year selected for the reason that the last remaining currency to be convertible to gold (the US Dollar) was made inconvertible on August 15, 1971. 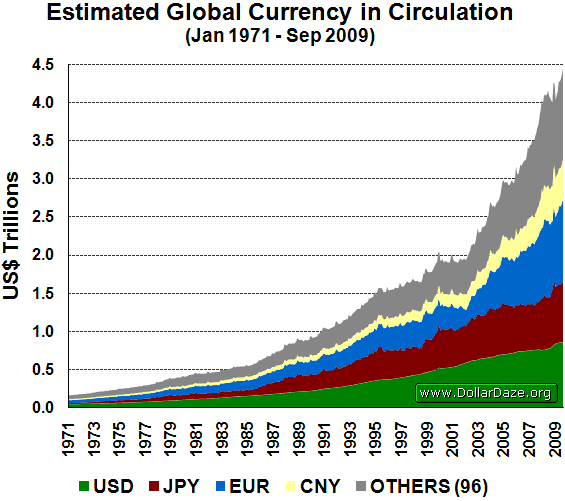 Since 1971 the total value of cash money in circulation world wide has been increasing at a rate of 9.09% compounded annually.

The four largest currencies by circulation (now the Euro, US Dollar, Japanese Yen and Chinese Yuan) comprise nearly 75% of all circulating banknotes and coins within the public domain.

It is also apparent that the quantities of money are increasing in an accelerating fashion.

The author is of the opinion that these substantial increases to the amount of circulating currency will ultimately lead to decreased purchasing power.