END_OF_DOCUMENT_TOKEN_TO_BE_REPLACED

Shipwrecked without it, could the Pound bear a fresh slug of quantitative easing...?

The BANK of ENGLAND's asset purchase program – better known as "Quantitative Easing" – was maintained at its £200 billion limit ($318bn) at the Old' Lady's January policy meeting in London, writes Adrian Ash of BullionVault.

With one month and just £7bn left to go, we wonder here at BullionVault what the chances are that a QEII will soon hove into view. Because, all told, the first £200bn has been sunk to little effect.

Financed by "the issuance of central bank reserves" (better known as money printing), the Old Lady's queasing was initially given a limit of £75bn when it began in March 2009. So far, the money has gone on:

So while the avowed aim was to "get money into the economy" with a cash injection approaching 14% of GDP, the mechanism of choice was in fact to buy UK government bonds, rather than extending, say, loans to business.

No matter; stated logic had it that, this way, the banks and other institutions relieved of their government gilts would put the money received in exchange to good use...investing in and lending to the private sector.

But no. Not quite. Loan growth to UK households has sunk to near-historic lows beneath 2.0% year-on-year, while lending to non-financial businesses continues to contract, down by almost 1% of GDP (£13bn) since QEI was launched last March.

What about interest rates? Q.E., after all, is all about "easing with quantity"...throwing money at the long-end of the yield curve to suppress those rates which overnight and short-term market operations cannot reach. That way, mortgage costs and lending to business can also be "eased", smoothing private-sector recovery with a little monetary magic.

But no again. Because after an initial plunge on news of the asset-purchase program in Feb-March, gilt yields have since risen above where they started in 2009. Home-loan rates and commercial loans have ticked higher as well. Which kinda begs the question whether next month really will "should" see an end to QE or not... 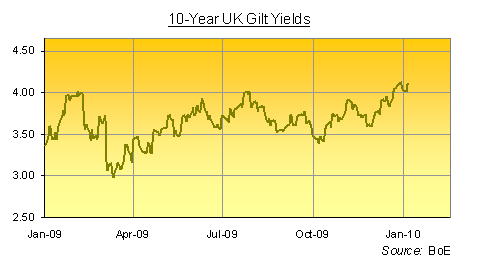 Given the money-supply and interest-rate failures of queasing to date, that leaves the unmentionable aim of QEI – helping the UK government finance the worst budget deficit in peace-time history.

Sure, so "debt monetization" a la Weimar Germany it ain't. Not quite. Because the Old Lady hasn't actually pushed a wheel-barrow full of cash from Threadneedle Street two miles west to Whitehall. But the net effect, as BullionVault is hardly alone in guessing, is pretty much the same. Market demand for UK debt got a £191bn fillip (so far; there is £7bn still to go remember) courtesy of the Bank offering to buy gilts for cash. And by bizarre coincidence, the QE total of £200bn just so happens to match the government's fiscal deficit for this current year.

The wheel-barrow was pushed around the Square Mile, in short, but eventually found its way to the Treasury all the same. And just what did the Old Lady get for her freshly-inked money?

Now holding 21% of the UK government's total £803bn debt outstanding, the Bank of England hasn't bothered with any gilts maturing before March 2013. No doubt those bonds could look after themselves, what with the Bank's own overnight rate set at just 0.50%, keeping a lid on such "ultra-short" gilt yields (i.e. boosting prices).

The Bank hasn't bought any of the measly £3.5bn in undated War Loan or consolidated "rumps" either. Nor has it picked up any inflation-linked gilts, not with its quantitative easing, at least. (The BoE's staff pension scheme, in contrast, can't enough of the things...holding 88% of the Old Lady's retirement funds as inflation-proof bonds at last count, more than 1% of all index-linkers in issue by value.) No, in the asset purchase scheme, the Bank has focused solely on conventional (i.e. inflation-exposed) gilts, weighting its money most heavily on medium- and long-term bonds.

To see her QEI return home safely, the Old Lady could of course hold these gilts to maturity, picking up the interest meantime but wearing a 10.5% loss from purchase price (£191bn) to redemption (£171bn face value at par). Rather than waiting five decades to retire this cash injection, however, let's imagine the Bank of England not only stops buying more gilts in February 2010, but actually chooses to exit its current gilt positions before March 2013, when its shortest-term holding matures.

Why not? The government's now counting on 3.75% GDP growth year-after-year starting in 2012. But reversing the QEI would mean the bond market has to swallow another £171 billion of UK debt (or more, depending on market prices...) and that would come on top of the £431bn already slated for sale in the Treasury's forecasts (last pegged too small by half as fiscal year 2009-2010 unwound), which in turn do not include the £132bn that will need refinancing as the current stock of ultra-short gilts mature. 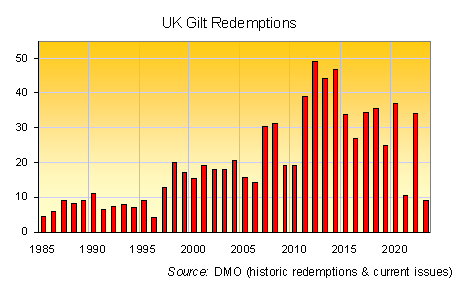 Totaling £563bn (£895bn) even without a reversal of quantitative easing, in fact, likely debt issuance over the next 36 months already equals 90% of total gilt holdings outside the Bank today (including index-linkers, War Loan and rump).

That's an awful lot of cash to find in a hurry. Not least with the United States already set to ask bond buyers for $3.5 trillion in the next 12 months alone.

What might happen to gilt prices, and thus UK interest rates, if the QEI does put into shore? But how much more money-printing can the Pound bear should QEII launch to rescue the state...?