END_OF_DOCUMENT_TOKEN_TO_BE_REPLACED

"Back to the Future Day" points to key lessons for big-gain hunting investors...

WEDNESDAY last week was "Back to the Future" Day, writes Chris Mayer in The Daily Reckoning.

In the second film of famous Back to the Future trilogy, Marty McFly and Doc Brown travel from 1985 to Oct. 21, 2015. There were all kinds of articles about the film and what it got right and wrong and so forth.

Of course, I can't help but wonder what stocks you might've bought back in 1985 that turned into 100-baggers. A columnist at MarketWatch, Philip van Doorn, looked at the top performers in the S&P 500 from 1985 to now: 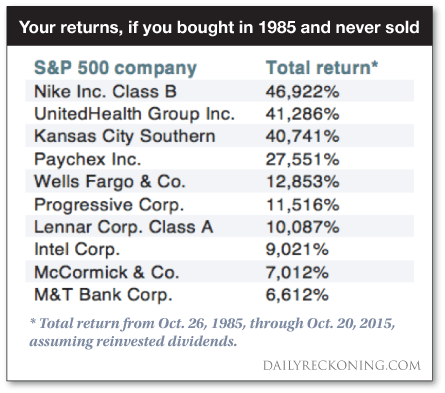 (Side note: Kansas City Southern might be a head-scratcher. This one is probably worth a case study in itself. Kansas City Southern owned a bunch of stuff that it wound up spinning out. For example, it owned Janus and DST Systems and had stakes in other businesses as well.)

I mean, come on, Nike? Here is yet another example of a great stock that was right under our collective noses. It's not as if Nike was a big secret. All you had to do was buy and hold.

I peeked into my 100-bagger database and found many more 100-baggers with start dates somewhere in 1985: Autodesk, Best Buy, Jefferies Group, Novo Nordisk and more.

The list is a lot longer still if you include any stock you could've bought in 1985 and turned into 100-to-1 returns. You could easily have bought a different stock every week in 1985 that would've turned $1 into $100 at some point in the next year 30 years.

As I say, looking backward is humbling. But it can also inform the present. These names reinforce certain ideas I've hammered away at.

Here are some of them:

#1. You only have to be right once
Just a $5,000 investment in Nike could've turned into almost $2.5 million. That's a life-changing amount of money. You didn't have to make a dozen trades. You just had to make one. We're looking for those big, big winners.

#2. If you get the stock right, a lot of other stuff fades into the background
Think about owning Nike in 1985 and what lay ahead. You would have had to sit through the 1987 crash. And through the early 1990s recession and Desert Storm, where the market dropped 18% in three months. You had the Asian financial crisis, the tech bubble and the housing bubble. You would've had to sit through a lot of bad stuff.

At any point along this timeline, there was always a nearly endless list of worries and concerns to keep you away. All of it was a distraction. Is all you had to do was hang onto Nike.

So I emphasize the point again: Do not let today's headline worries distract you from your quest to find 100x stocks!

#3. Buy right and sit tight
This is somewhat related to the above points, but it is worth reiterating that the market will test you. Nike had several stretches of poor performance and at least few where the stock was nearly cut in half. Sometimes it went sideways or down for years at a time. You had to sit with Nike as other stocks zipped by you.

That makes it tough. Neither part of this "buy right and sit tight" advice is easy to do. You just have to learn to buy stocks like you would buy a car or a house. You buy carefully and with the idea that you're going to own it.

#4. The power of compounding drives mind-bending returns
All of the businesses on the list generated a high return on their equity and could reinvest their profits and earn those high returns year after year after year.

In the world of 100x, this is the most important lesson of all.

Nike's return on equity (ROE), for example, was well over 20%. ROE is simply net income divided by equity. Say you start a business with $100 of your own money and earn a $20 profit in the first year. That's a 20% ROE.

ROE is a decent proxy to look at in searching for 100-baggers, though it has limitations and is not applicable in all cases.

Look at Nike's ROE for each year beginning with 1985 and running through 2014. The average ROE was 20%. So let me ask you: Not knowing anything about the stock price but simply focusing on Nike's strong and highly consistent returns (only once below 10% in 30 years, and higher than 20% eighteen times) would you ever have sold this stock?

It seems to me you would not have. There were one or two off years. But in each case, the company rebounded quickly.

Think of it another way: If this were a fund you owned and these were your returns, would you have ever gotten rid of it? I don't think so.

Over the long term, as many others have observed, your return as a stockholder will roughly equal the return on equity of the business you own.

So once again, we see the template of 100-baggers emerge. We need high returns on equity, and we need to compound those returns over a long period of time. If you do that, you'll have your 100-bagger. It's just math at that point.

And remember this too: After 20 years, you are up "only" 40x. The biggest returns are always back-end loaded.

Of course, you don't have to wait 25 years to enjoy stellar returns. I believe my subscribers will have doubles and triples and quadruples in a few years. I'm just presenting you with the framework. If you can compound at 50% per year, you'll get to 100x inside of a decade.

Unfortunately, we don't have Doc Brown's DeLorean to take us into the future to find out what stocks become 100-baggers in the years ahead. But we know how to get there. We just have to stay committed to that goal and we'll find our 100-baggers.