END_OF_DOCUMENT_TOKEN_TO_BE_REPLACED

Lumber prices just hit the highest since the US housing crash...

AS IF you need more proof that inflation is finally starting to pick up, lumber prices rose to a 12-year high last week, writes Frank Holmes at US Global Investors.

The rise is supported mainly by expectations that steep duties will soon be levied on cheap softwood imports from Canada. Lumber futures rose to nearly $415 per thousand board feet last Monday, a level unseen since March 2005, soon after homeownership peaked here in the US. 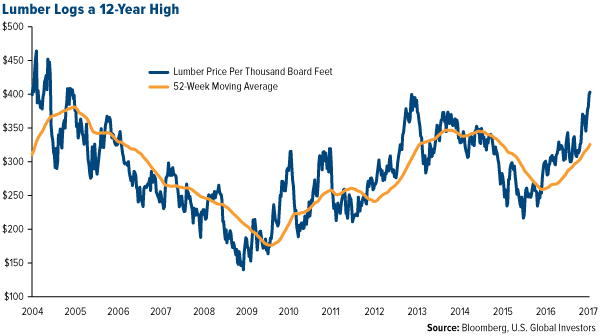 At issue is a mini-trade war between US and Canadian loggers. For some time now, the American lumber industry has blamed its Canadian counterpart of unfairly dumping lumber in the US that's far below market value.

Now, several factors are pushing timber prices higher. Chief among them are the likelihood of duties being raised at the Canadian border, possibly as early as next month; President Donald Trump's calls to renegotiate NAFTA; and growing demand for new homes following the housing crisis as consumer optimism improves and millennial buyers finally seem eager to enter the market. 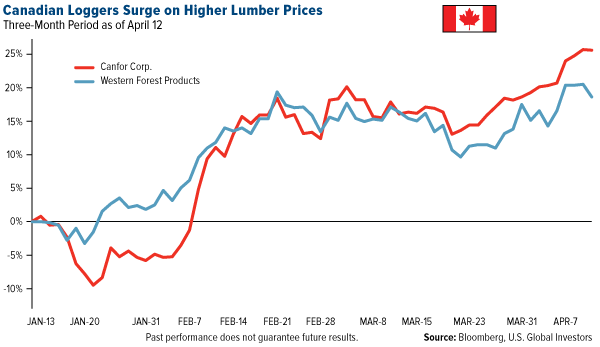 As I told Daniela Cambone during last week's edition of Gold Game Film, this is all very constructive for the price of gold, which has historically been used as a hedge during periods of rising inflation.

The yellow metal closed above $1270 an ounce last week for the first time since soon after the November presidential election. A "golden cross" has not yet occurred, with the 50-day moving average still below the 200-day, but such a move appears likely in the next few trading sessions if upward momentum can be sustained. 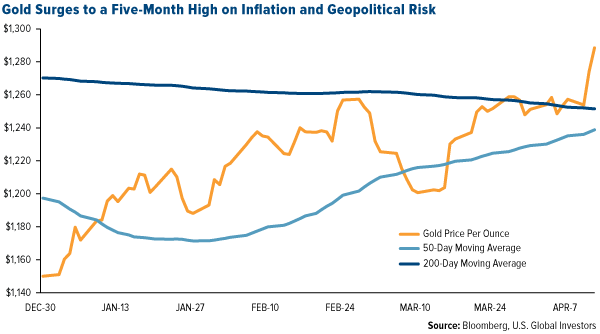 Fueled also by geopolitical tensions associated with Syria, Russia and North Korea, last Tuesday's trading volumes on gold calls surged 10 times Monday's amount on the New York Mercantile Exchange. Investor sentiment of gold during the recent European Gold Forum was particularly strong. A poll taken during the conference showed that 85% of attendees were bullish on the metal, with a forecast of $1495 by year's end.

With the US ramping up military action overseas, including its dropping of a devastating bomb in Afghanistan on Thursday, many investors are lightening their risk assets in favor of "safe haven" instruments such as gold and Treasuries. The S&P 500 Index dropped below its 50-day moving average last week, signaling a slowdown in blue chip stocks. 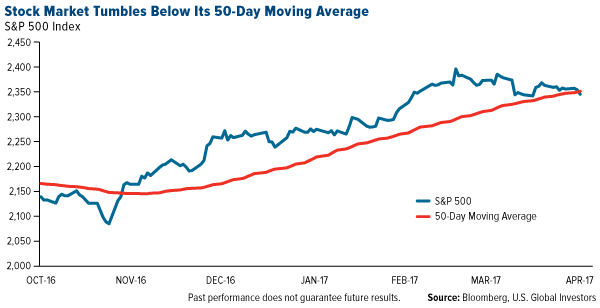 Financials were among the biggest laggards as investors have begun to question President Trump's ability to deregulate the banking sector. After several disappointments and setbacks, including a failure to repeal and replace Obamacare, renewed military involvement in Syria and Afghanistan might provide a welcome boost to Trump's sluggish job approval rating.

Gold also responded positively to recent comments by Trump on US Dollar strength and monetary policy. Specifically, he said the Dollar is "getting too strong" and later supported a low interest rate policy, suggesting he might keep Janet Yellen as the Federal Reserve chair.

April is New Homes Month, and to celebrate, the National Association of Home Builders (NAHB) shared some of the significant contributions housing provides to the US economy. According to the Washington, DC-based group, "building 100 single-family homes in a typical metro area creates 297 full-time jobs and generates $28 million in wage and business income and $11.1 million in federal, state and local tax revenue." The sector currently accounts for 15.6% of US gross national product (GNP).

Indeed, housing has a phenomenal multiplier effect on the economy, as I've pointed out before, and I'm pleased to see its recovery after nearly a decade.

Not only is consumer confidence up, but homebuilder confidence, as measured by the NAHB, hit a 12-year high in March, supported by an improving economy and President Trump's pledge to roll back strict regulations. In February, new housing starts hit 1.29 million units, beating market expectations of 1.26 million units.

Rising mortgage rates and home prices are also likely encouraging buyers to enter the market. With the 30-year rate having recently fallen to a fresh 2017 low, we might see an even stronger surge in mortgage applications. 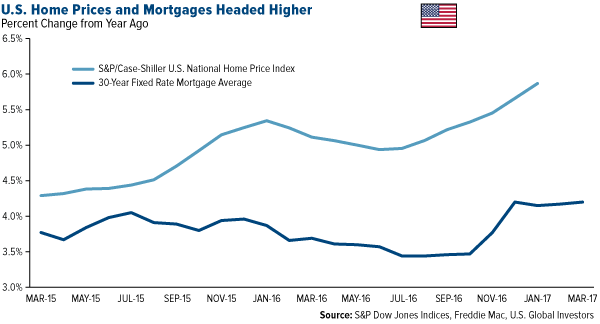 Declines in homeownership among lower-income, nonwhite and young adults were especially dramatic following the housing crisis, as subprime lending, which many homeowners had previously relied on, all but dried up. Homeownership rates in the US steadily fell to a 50-year low, which only lengthened the recovery time of the Great Recession. According to Rosen Consulting, a real estate consulting group, the US economy would have been $300 billion larger in 2016 had the housing market fully returned to its long-term level of construction and homebuying. 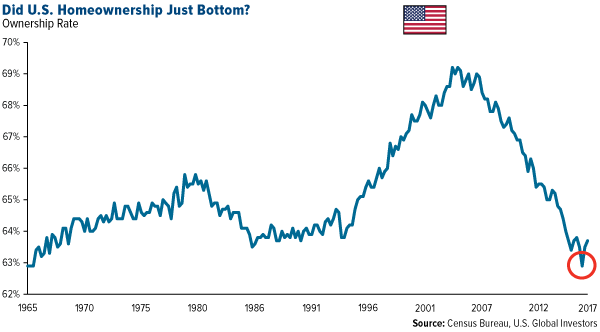 Millennials, or those generally born between 1981 and 1998, have been the biggest holdouts, but we're finally starting to see that change. The cohort – the largest group of homebuyers in the US right now – represented around 45% of all new home loans in January of this year. It's likely we'll see this figure rise as more millennials become better established in their careers and tire of renting.